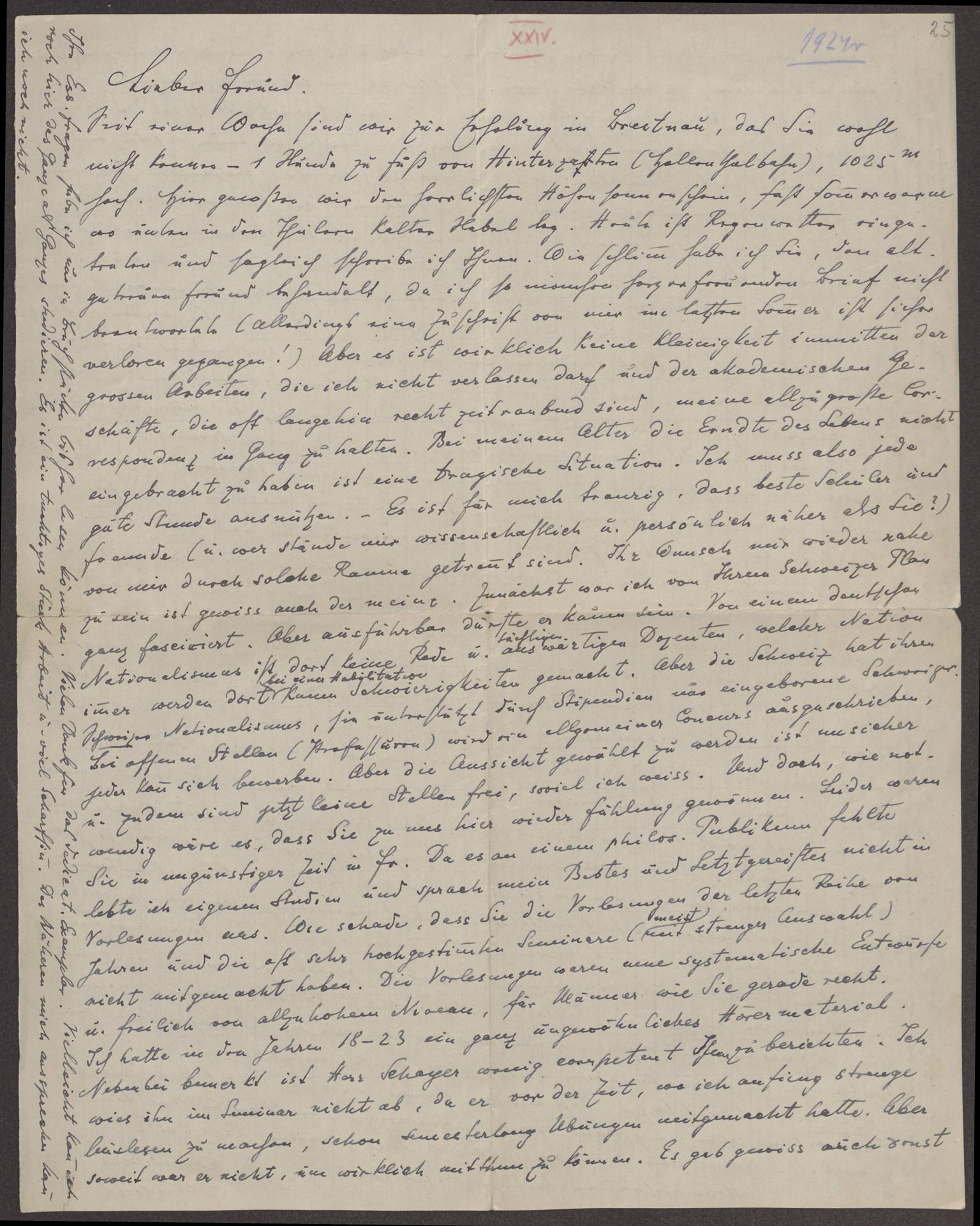 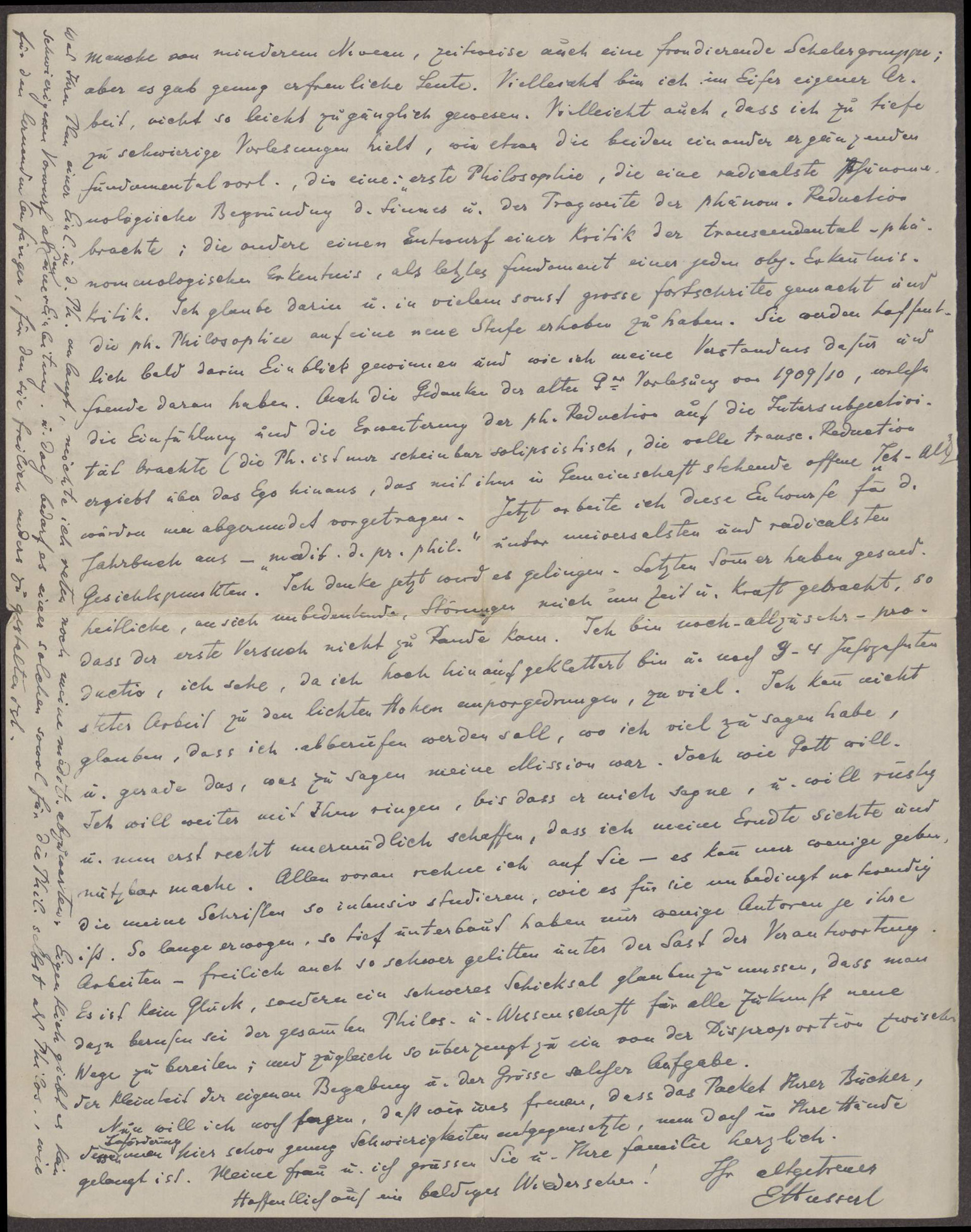 We have been relaxing in Breitnau, which you have probably never heard of, for a week now. It is located one hour on foot from Hinterzarten (Höllenthalbahn) at an altitude of 1025 meters. Here we enjoyed the most glorious sunshine, almost summery warm, while cold fog lay down in the valleys. Today, it has been raining, and I am taking this opportunity to write to you right away. How badly I have treated you, my loyal friend, since I did not reply to many of your heartwarming letters (however, a letter from me last summer must have gotten lost in the mail!). However, it is not that easy, in the midst of the great work that I cannot step away from, and the academic business, which is often quite time-consuming, to keep up with all of my correspondence. It’s a tragic situation for me at this age to not have harvested the fruit of my life. Hence, I have to take advantage of every good hour. I am sad that the best students and friends (and who would be closer to me scientifically and personally than you?) are separated from me by such distances. Your desire to be close to me again is certainly my desire, too. Initially, I was quite fascinated by your Swiss plan.23 However, it would hardly be executable. There is no talk of German nationalism, and competent foreign lecturers, of whatever heritage, hardly have to expect any difficulties in regard to their habilitation. But Switzerland has its Swiss nationalism, and only indigenous Swiss students receive scholarships. For open positions (professorships), a general vacancy announcement is advertised, and anyone can apply. But the prospect of being selected is uncertain, and besides, there are currently no vacancies, as far as I know. And yet, it would be desirable for you to get back in contact with us here. Unfortunately, you came to Fr[eiburg] at an inopportune time. Since there was not much of a philosophical audience, I lived my own studies and did not present my best and last conceived in lectures. What a pity that you were unable to attend the lectures in the last couple of years and the often very high-profile seminars (usually given to a select audience). The lectures were focused on new systematic designs, and of course, on a very high level, suitable for men of your caliber. In the years 18-23, I had a very unusual audience. By the way, Mr. Schayer is not qualified to report back to you. I did not reject him from the seminar, because he had participated in several exercises over a course of several months before I began rigorously selecting attendees. However, he was not ready to really participate. There were certainly others who were not ready for such a high level; at times, there was also a revolting Scheler group; but there were enough pleasant people. Perhaps I wasn’t very approachable amidst my enthusiasm and zeal for my own work. Or perhaps I gave lectures that were too complicated and too difficult, such as the two complementary fundamental lectures “Original Philosophy” which covered the most radical pheno[menological] justification of the sense and scope of the phenomenological reduction, and the other one was a draft of a critique of transcendental-phenomenological cognition as the ultimate foundation of each obj[ective] cognitional critique24. I believe that I have made much progress in these areas and otherwise and I have raised ph[enomenological] philosophy to a new level. I hope you will soon gain an insight and, I think, you will understand and enjoy it, too. In addition, the ideas of the old lecture I gave in Göttingen in 1909/10, which served as an introduction and expansion of ph[enomenological] reduction concerning inter-subjectivity25 (ph[enomenology] only seems solipsistic, the whole trans[cendental] reduction results, beyond the ego, in the related universe of egos), were presented in a revised manner. I am currently editing these drafts for the Yearbook – medit[ationes] d[e] pr[ima] phil[osophia] under the most universal and radical aspects.26 I am sure it will be a success. Last summer, minor health problems robbed me of time and energy so that the first attempt did not come to fruition. I am still – overly – productive. I see too much, since I kept climbing and after 3-4 decades of constant work, I have reached a clearing atop a mountain. I cannot believe that I will soon be recalled; I have so much to say and speaking out was my mission. But God willing, I will continue to wrestle with him until he blesses me and will continue to stay active and work relentlessly, so I can see and utilize my harvest. First and foremost, I am counting on you – there can only be a few who study my writings as intensively as is absolutely necessary for them to do. So few authors have contemplated their thoughts longer and supported their work in greater depth – admittedly, also suffered so much under the burden of responsibility. It is not a blessing but rather a curse to believe that one is called to prepare new paths for the whole philosophy and sciences for all the future; and at the same time, to be convinced of the disproportion between the smallness of one’s own talent and the large size of such a task.27

Finally, I would like to say that we are glad that the package with your books, whose mailing had been confronted with enough difficulties on our end, has finally reached you. Best regards from my wife and me. Please send our warmest regards to your family, too. Hopefully, we will see each other soon!

So far, I have only been able to read fragments of your Ess[ential] Questions. Thank you for the dedicated copy. Perhaps I can still study the whole work while here. It is a good piece of work and contains a lot of ingenuity! I cannot yet speak about it in greater detail.

Regarding your plan for the Introduction into Ph[enomenology], I would advise you to wait for my Medit[ations]. Actually, there is nothing more difficult than writing an introduction, and yet there is one needed for philos[ophy] as a philos[ophy] by itself, as well as for beginning students, for whom, of course, it should be presented differently.