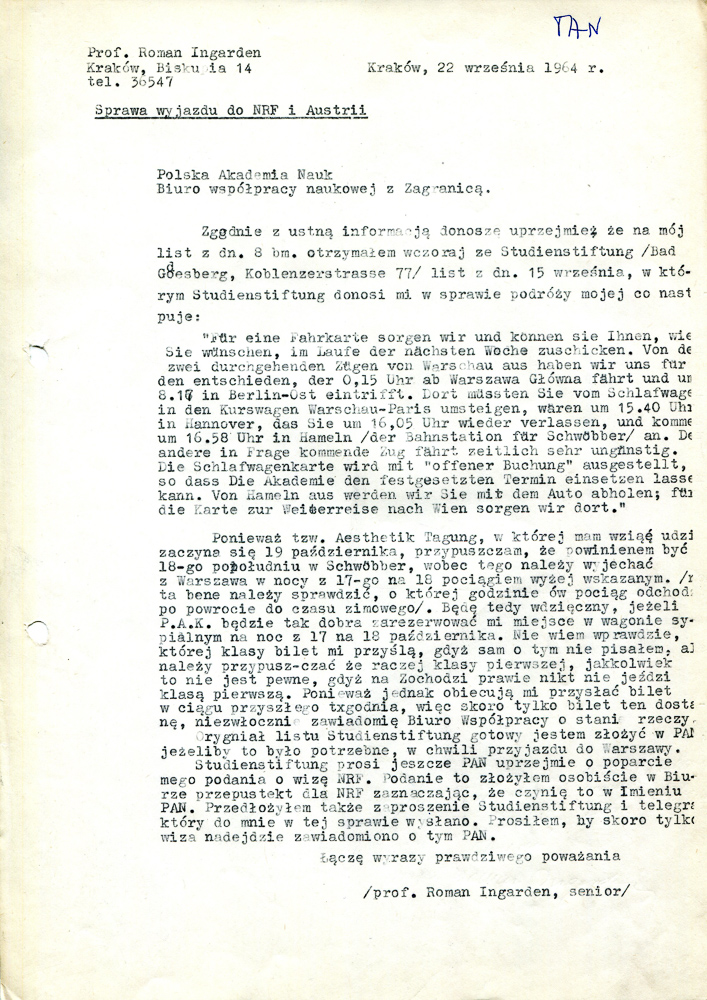 The matter of travelling to the GFR and Austria

c      With reference to our conversation please be kindly informed that yesterday I have received a reply letter dated September 15, from Studiens tiftung /Bad Goesberg, Koblenzerstrasse 77/ to my letter from 8/11, wherein Studienstiftung reports to me with regards to my travel the following:

c      “We can arrange a ticket and send it to you, as you wish, during the next week. From among the two trains going through Warsaw we have decided upon the one leaving Warszawa Główna at 0.15 a.m. and arriving at East Berlin at 8.18 a.m. There you would have to transfer to the sleeping car of the Warsaw-Paris train arriving to Hannover at 3.40 p.m. and leaving it again at 4.05 p.m., and arriving in Hameln at 4.58 p.m. /the train station for Schwobber/. The other train in question is very disadvantageous in terms of time. The sleeping car ticket is issued with an “open ticket”, so that the Academy can insert the date when it has been established. A car will pick you up from Hameln; we shall take care of your travel to Vienna after your arrival. “

c      As the so-called Aesthetik Tagung, which I am supposed to take part in, begins on October 19, I suppose I should be in Schwobber in the afternoon of the 18th, which means I should leave Warsaw on the night of 17/18 on the train indicated above /however, it should be checked what time the train will be leaving XX after the return to winter time/. Therefore, I would be grateful if P.A.S. could will so kind as to book me a seat in a sleeping car for the night of October 17/18. I do not know which class they will send me a ticket for as I did not inquire about it, but it should be assumed that it will probably be the first class, however it is not certain, as in the West almost no one takes first class. However, since they promise to send me a ticket within the next week, I will immediately inform the International Cooperation Office about the state of affairs as soon as I get it.

c      Studienstiftung is also asking the PAS to kindly support my application for a NRF visa. I have submitted this application personally to the Pass Office of the Federal Republic of Germany, indicating that I am doing it in the name of the PAS. I have also submitted the invitation from the Studienstiftung and a telegraph that I have been sent regarding this case. I asked that the PAS is notified as soon as the visa arrives.

Letter to the Committee of the Library of Classics of Philosophy written 18.07.1951