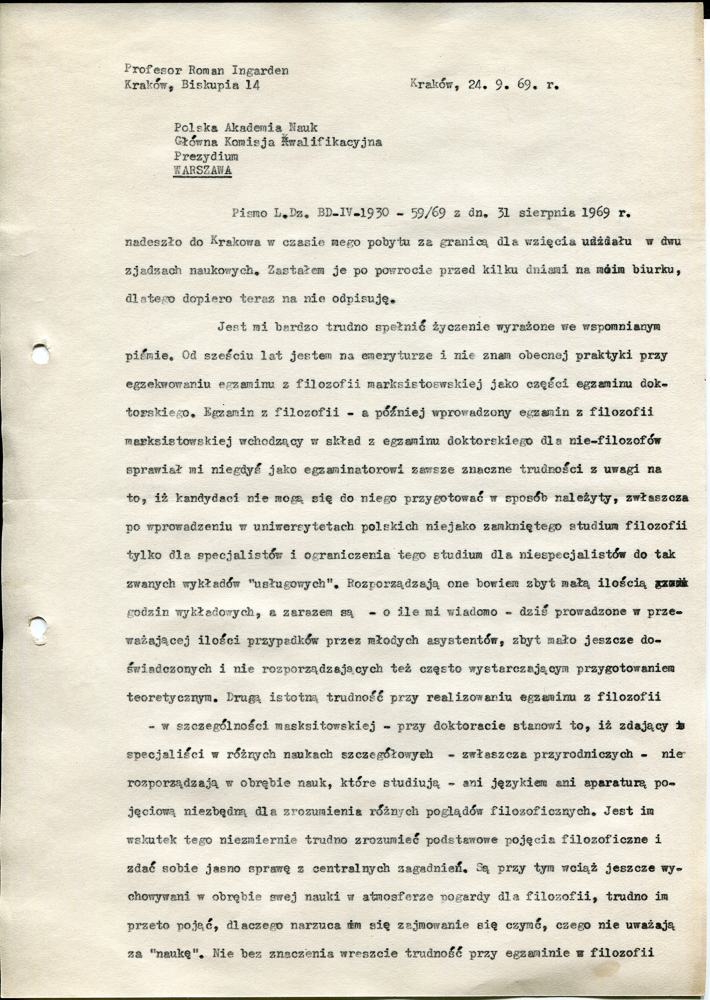 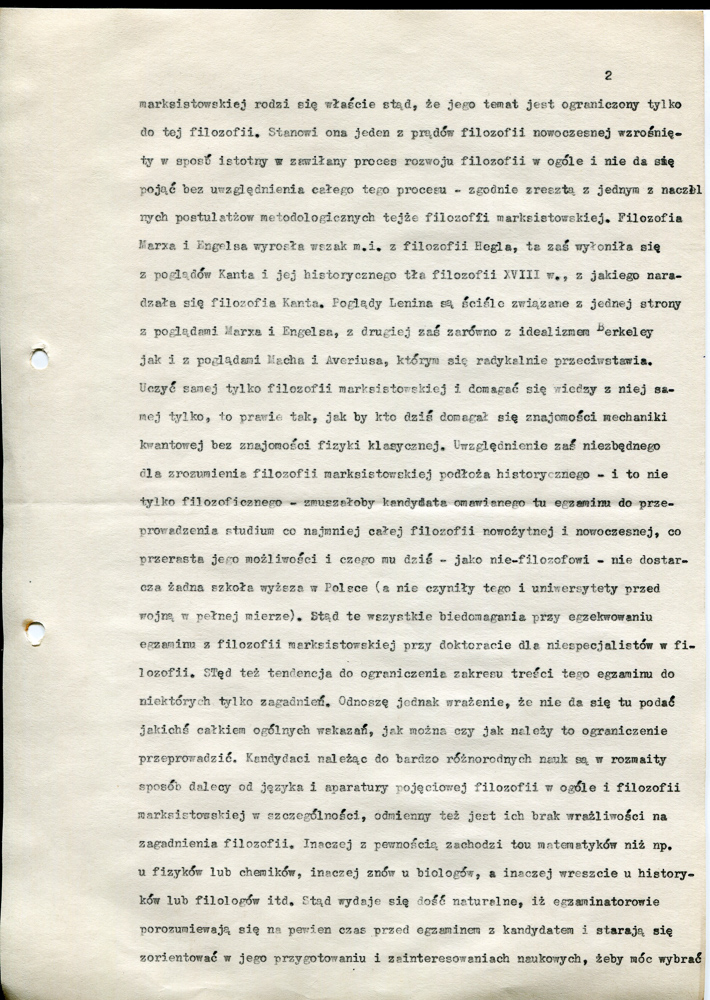 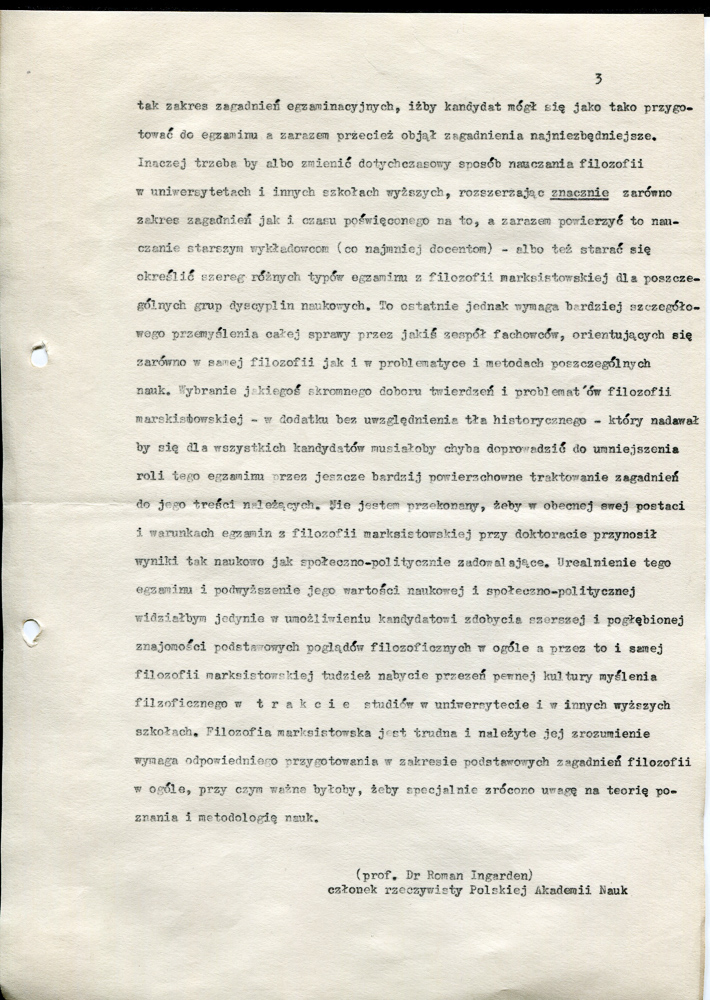 came to Krakow during my trip abroad to take part in two scientific meetings. I found it upon returning a few days ago on my desk, hence I am only replying to it now.

c            c     It is very difficult for me to fulfill the wish expressed in the said letter, I have been retired for six years and I am not familiar with the current practice requiring an exam in Marxist philosophy as part of the doctoral examination. The examination in philosophy – and the later introduced as part of the doctoral examination for non-philosophers exam in Marxist philosophy, has always posed considerable difficulties for me as an examiner due to the fact that the candidates are unable to prepare for it properly, especially after the Polish universities have introduced somewhat of a closed study of philosophy only for specialists and limited the study for non-specialists to the so-called “service” lectures. The amount of lecture hours is too little, and at the same time the classes are – as far as I know – nowadays conducted in the majority of cases by young assistants who are not yet experienced enough and often lack sufficient theoretical preparation.
The second major difficulty in conducting the exam in philosophy – and particularly in Marxist philosophy – at the doctoral level is that the candidates who specialize in various detailed sciences – especially natural sciences – have at their disposal within the fields they study neither the language nor the conceptual apparatus necessary to understand different philosophical views. As a result, it is extremely difficult for them to understand basic philosophical concepts and to realize clearly the central issues, meanwhile they are still raised within their fields in an atmosphere of contempt for philosophy, so it is difficult for them to understand why they are being forced to deal with something that they do not consider “science”. Finally, the difficulty of the exam in Marxist philosophy is born precisely because its subject is limited to that particular philosophy. It is one of the trends of modern philosophy, which has grown significantly in the complicated process of the development of philosophy in general, and it cannot be understood without taking into account the entire process – in accordance with one of the chief methodological postulates of the very same Marxist philosophy.
After all, the philosophy of Marx and Engels stemmed from Hegel’s philosophy, which in turn emerged from Kant’s views and the historical background of the 18th-century philosophy from which Kant’s philosophy was derived. Lenin’s views are closely related to the views of Marx and Engels on the one hand, and on the other to both Berkeley’s idealism and those of Mach and Averius, which he radically opposes. To teach only Marxist philosophy and demand knowledge of it alone is almost the same as to demand knowledge of quantum mechanics without knowledge of classical physics. If the historical – and not just in terms of philosophy – background necessary for understanding Marxist philosophy were to included, the candidate of the discussed exam would have to be required to study at least all modern and contemporary philosophy, which oftentimes would surpass their capabilities and which would not be required of them – as a non-philosopher – at any other University in Poland (and not even before the war did universities have this expectation, for the most part). Hence all these problems that arise when one seeks to introduce the exam in Marxist philosophy at the doctoral level for non-specialists in philosophy.
And also hence the tendency to limit the scope of this exam to only a few select issues. However, I get the impression that no general instructions can be formulated here as to how or if these limitations should be made. Candidates belonging to very diverse scientific fields are in various ways far removed from the language and conceptual apparatus of philosophy in general and Marxist philosophy in particular, their lack of sensitivity to philosophical issues is also different. Certainly, it is different for mathematicians than for example physicists or chemists, biologists and historians or philosophers, etc. Consequently, it seems quite natural that the examiners will communicate with the candidate some time before the exam and try to find out a little about their preparation and scientific interests in order to be able to choose a range of exam topics so allowing the candidate to prepare for the exam as well as, at the same time, cover the most necessary issues.
Otherwise you would have to either change the current manner of teaching philosophy at universities and other colleges by significantly expanding both the scope of subjects and the time devoted to it while, at the same, time entrusting the instruction of classes to senior lecturers (at least associate professors) – or try to create a number of different types of the exam in Marxist philosophy for particular groups of scientific disciplines. The latter, however, requires a more detailed consideration of the whole matter by a team of professionals who are familiar with both the philosophy itself and the issues and methods in particular sciences. Making a modest selection of some claims and issues in Marxist philosophy – additionally, without taking into account their historical background – which would be suitable for all candidates would probably have to lead to the role of this exam being diminished even more because of the superficial treatment of issues belonging to its content. In its current form and under current conditions, I am not convinced that the exam in Marxist philosophy at the doctoral level would bring ether scientifically or socio-politically satisfactory results.
To make this exam a reality and increase its scientific and socio-political value is something I would only see in enabling the candidates to acquire a broader and in-depth knowledge of basic philosophical views in general, and thus also Marxist philosophy, as well as a certain culture of philosophical thinking in the course of their studies at universities or colleges. Marxist philosophy is difficult and its proper understanding requires proper preparation in the domain of basic issues in philosophy in general, where it would be important to also pay particular attention to the theory of knowledge and methodology of sciences.