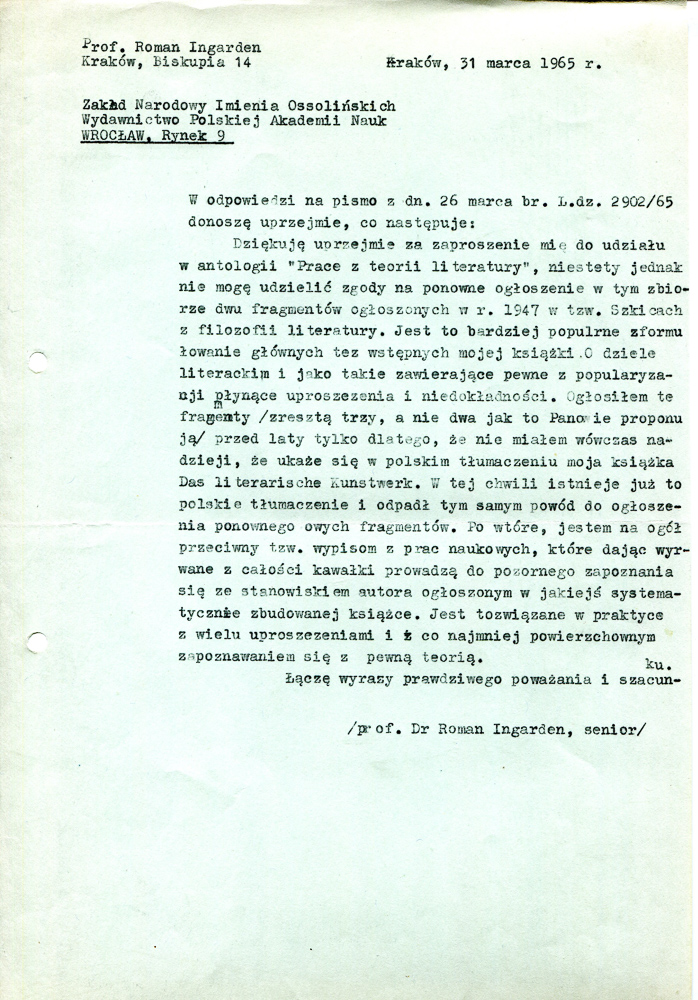 The National Ossolinski Institute
Publisher of the Polish Academy of Sciences
WROCŁAW, Rynek 9

in response to the letter from March 26 this year 1.dz. 2902/65 I kindly report the following:
c       Thank you for kindly inviting me to participate in the “Works on the Theory of Literature” anthology, but, unfortunately I cannot agree to re-publish two fragments published in 1947 in the so-called “Sketches on the philosophy of literature” in this collection. It is a more popularizing formulation of the main introductory theses of my book about on literary works and, as such, it contains some simplification and inaccuracies stemming from the nature of popularization. I published these fragments / three, and not two, as you seem to suggest / years ago only because at that time I had no hope that my book Das literarische Kunstwerk would appear in Polish translation. As of now, this Polish translation already exists and the reason for re-publishing these fragments would no longer be there. Secondly, I am generally against the so-called excerpts from scientific papers, which by giving pieces taken out of the entire text seemingly familiarize the readers with the author’s position announced in a systematically built book. In practice, this leads to a number of simplifications and building knowledge of theories that is superficial, to say the least.

Letter to the Committee of the Library of Classics of Philosophy written 03.06.1955