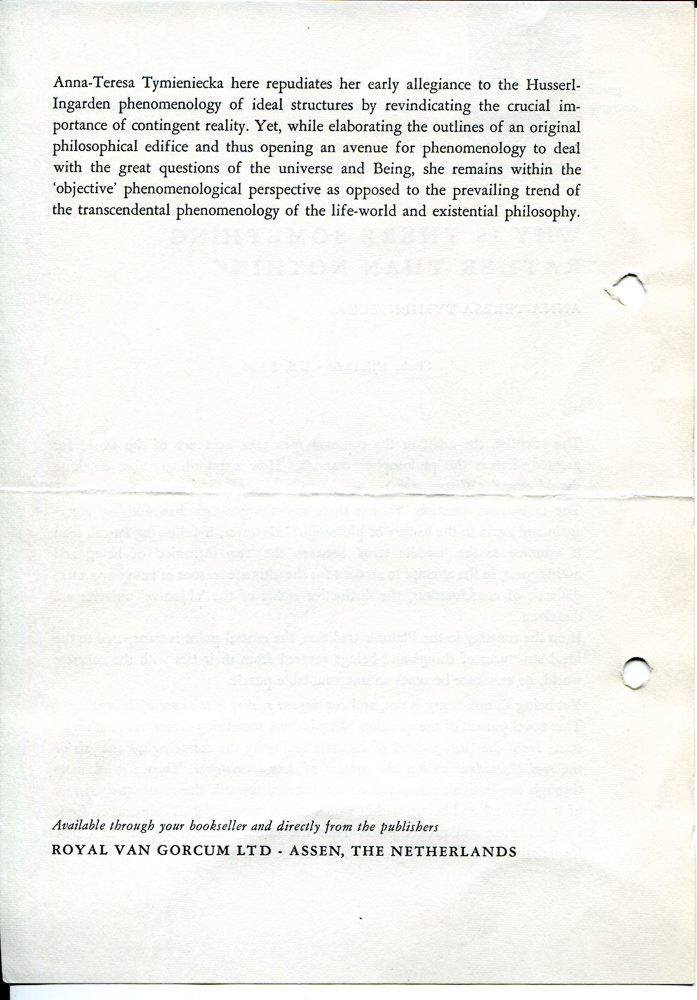 The scientist, the artis or the common man take existence of the world for granted,whereas the philospher marvels: ‘How extraordinary that anything should exist?’ (Wittgenstein).

The Leibnizean question ‘Why is there something rather than nothing’ recurs again and again in the history of philosophy. However, if following Pascal, man is assumed as the ‘middle term’ between the ‘two infinities’ of being and nothingless, in the attempt to account for the ultimate reasons of being by a mere dialectic of consciousness, the distinctive rights of the ‘objective’ universe are dissolved.

If,on the contrary in the Platonic tradition, the central point is transposed to the ideal structures of things and beings severed from their ties with the concrete world, its existence becomes an unaccountable puzzle.

Yet being is, non-being is not, and contingent reality is the core of being. This novel pursuit of the question ‘Why is there something rather than nothing?’starts from the firm ground of concrete reality by the cosmological analysis of the real individual within the context of actual existence. Thence it advances through the intrinsic postulates of contingency towards the constitutive system of the universe and being, within which man’s transcendental constitution finds its elucidation and proper place. Thus the initial question appears as a new formulation of the eternal problems of cosmic creation.

Anna-Teresa Tymieniecka here repudiates her early allegiance to the Husserl-Ingarden phenomenology of ideal structures by revindicating the crucial importance of contingent reality. Yet, while elaborating the outlines of an original philosphical edifice and thus opening an avenue for phenomenology to deal with the great questions of the universe and Being, she remains within the ‘objective’ phenomenological perspective as opposed to the prevailing trend of the transcendental phenomenology of the life-world and existential philosophy.

Available through your bookseller and directly from the publishers
ROYAL VAN GORCUM LTD – ASSEN, THE NETHERLANDS