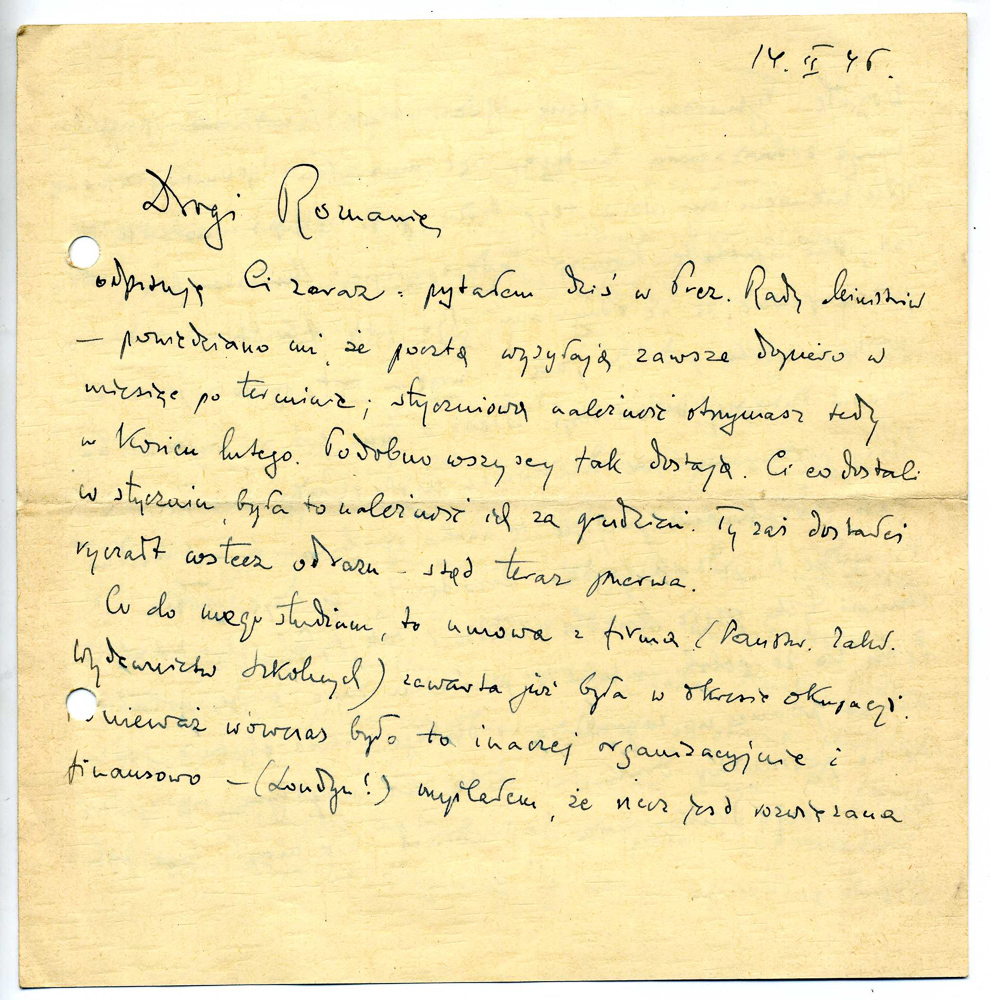 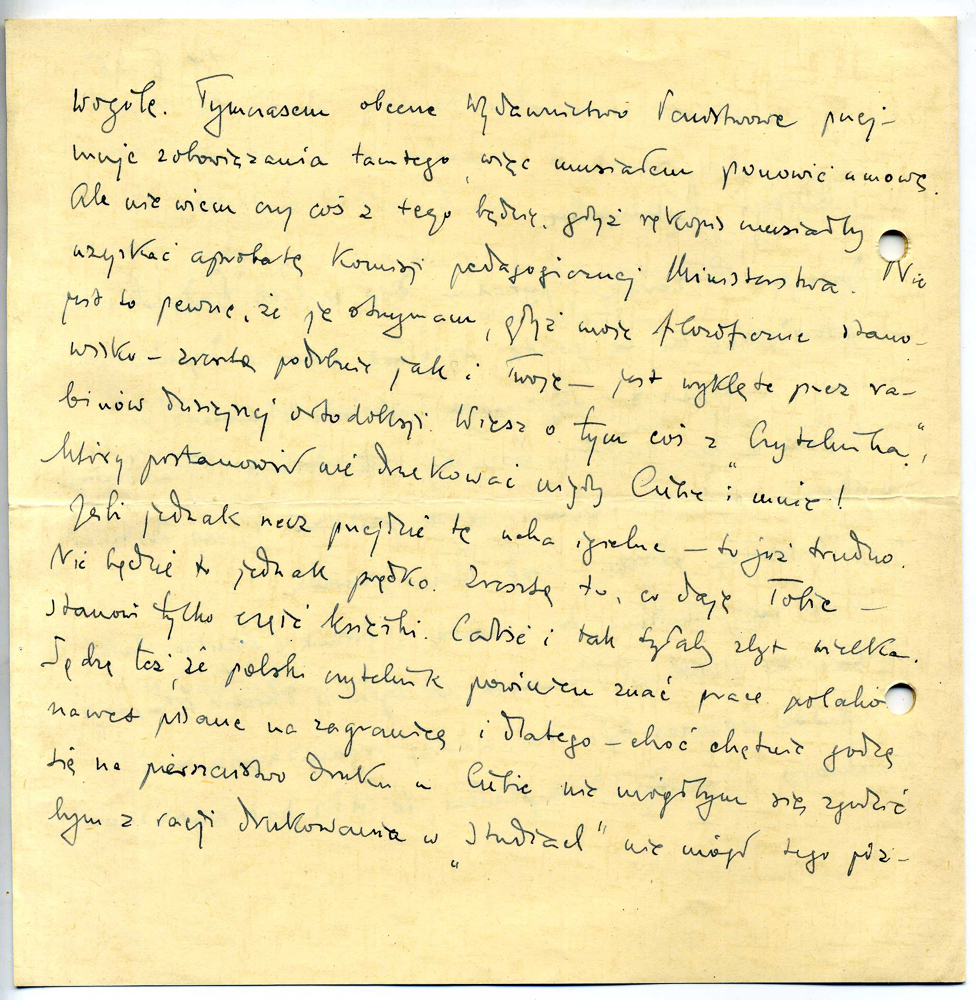 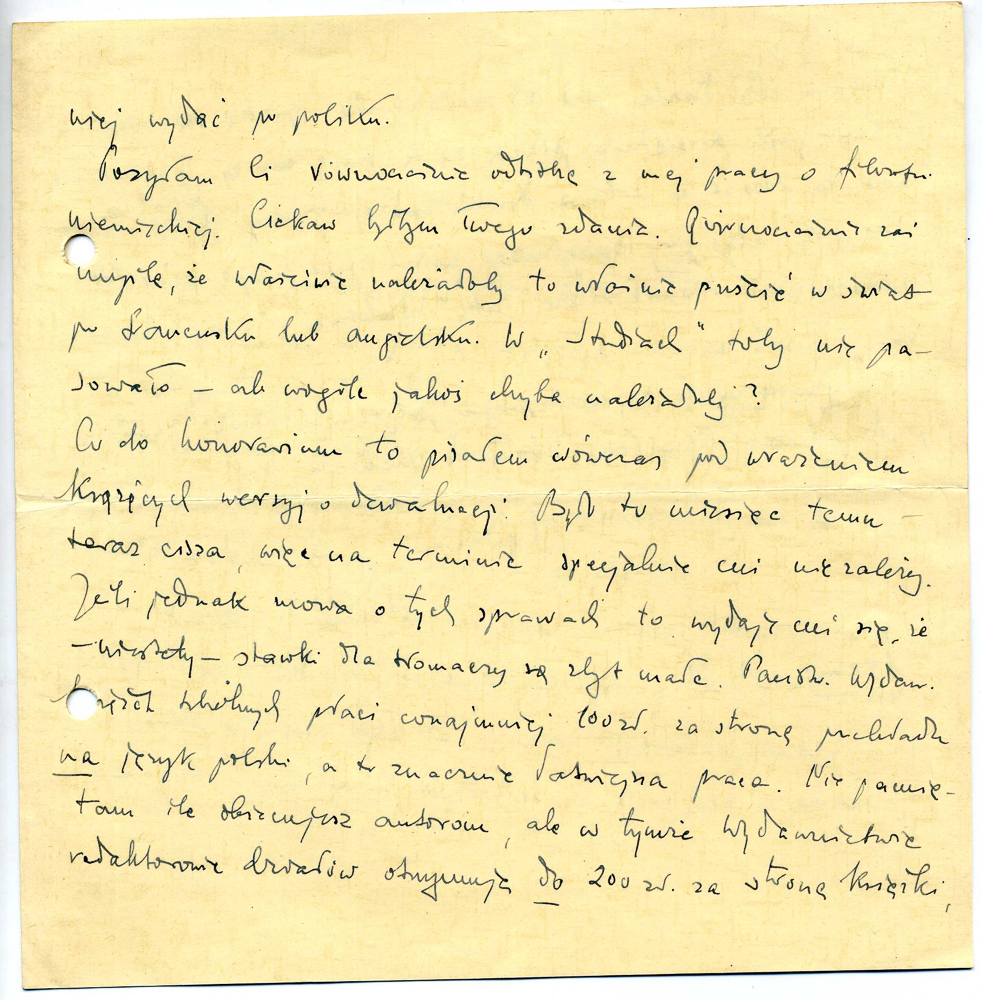 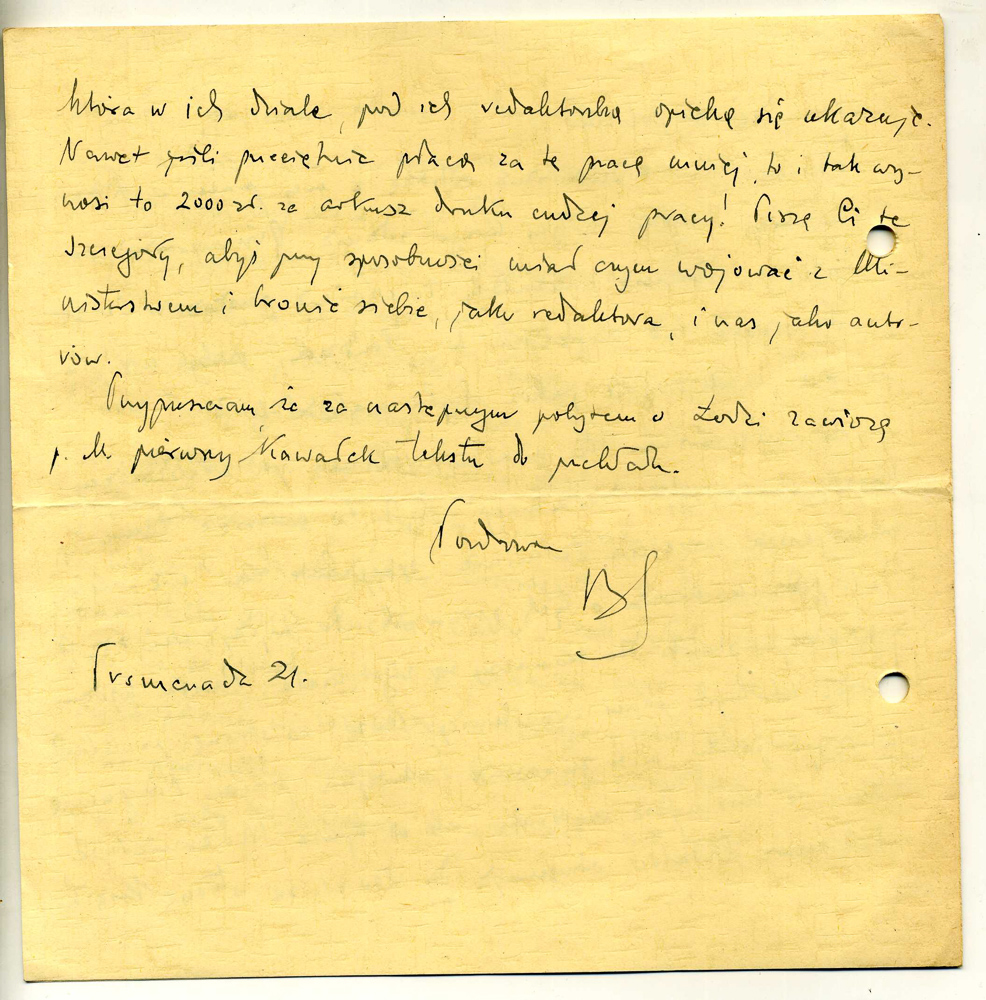 I’m writing back to you immediately: I asked today at the Presidium of the Council of Ministers, and was told that they send it by post, always only as of one month after the deadline; you’ll receive the January remittance at the end of February. They say everyone gets it that way. For those who got it in January, it was their remittance for December. You received a retroactive lump sum right away, hence the break now.
c          As for my study, the contract with the company (State Scholastic Publishing House) had already been concluded during the occupation. Because it was different then in terms of organisation and finances (London!) I thought that the thing had been generally resolved. Meanwhile, the present State Publishing House is taking over the obligations of the other, so I had to renew the contract. But I don’t know whether anything will come of it, because the manuscript would have to gain the approval of the Ministry’s pedagogical Commission. It’s not certain that I’m going to get it, since my philosophical position – in any case, similar to yours – is cursed by the rabbis of today’s orthodoxy. You know something about this from The Reader, which has decided never to publish me or you!
c          However, if the thing makes it through the eye of this needle – too bad. It won’t be soon, though. Anyway, what I’m giving you constitutes only part of the book. The whole thing would be too big anyway. I also believe that the Polish reader should know the works of Poles, even those written abroad, and therefore, though I willingly agree to the priority of publication with you, I wouldn’t be able to agree that due to printing in Studies [Studia Philosophica] I’d be unable to publish it later in Polish.
c          At the same time I’m sending you an offprint of my paper on German philosophy. I’d be interested in your opinion. At the same time, I think that it should actually be released into the world in French or English. It wouldn’t suit Studies – but generally speaking, shouldn’t it be, somehow?

As for the fee, I wrote then while under the impression of the currently circulating versions concerning devaluation. This was a month ago – now, silence, so the deadline’s not especially important to me. If, however, there’s to be talk about these matters, it seems to me that – unfortunately – the rates for translators are too low. The State Publishing House for schoolbooks pays at least 100 zlotys per page of translations into Polish, which is significantly easier work. I don’t remember how much you’re promising authors, but for this Publishing House, department editors receive up to 200 zlotys per page of a book appearing in their section under their editorial supervision. Even if they pay less on average for this work, it’s still 200 zlotys per arkusz [40,000 characters] of someone else’s work! I’m sending you these details so that, given the opportunity, you’ll have something with which to fight with the Ministry and defend yourself as an editor and us as authors.
c          I suppose that the next time I stay in Łódź I’ll bring Mr [or Ms?] M. the first piece of text to be translated.