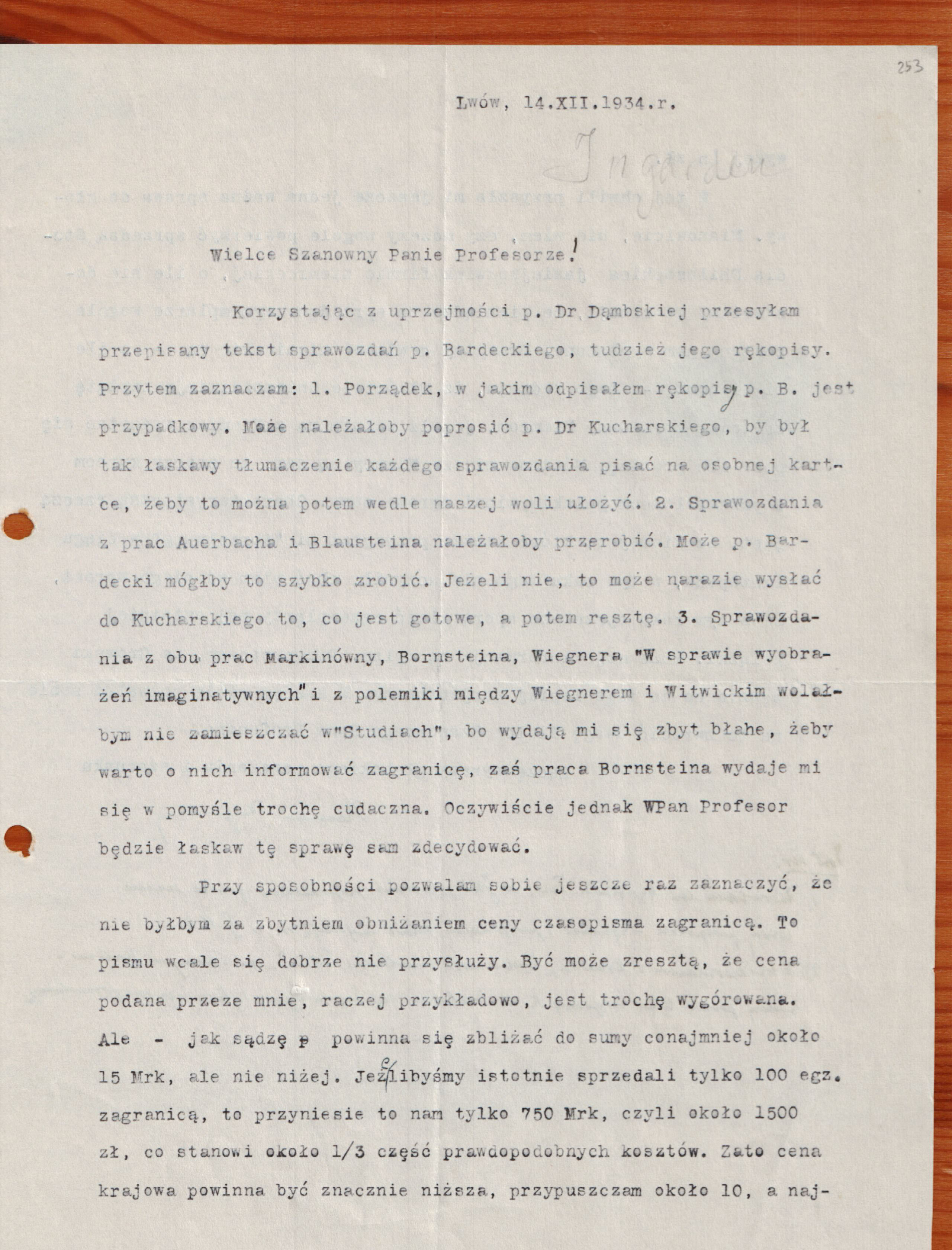 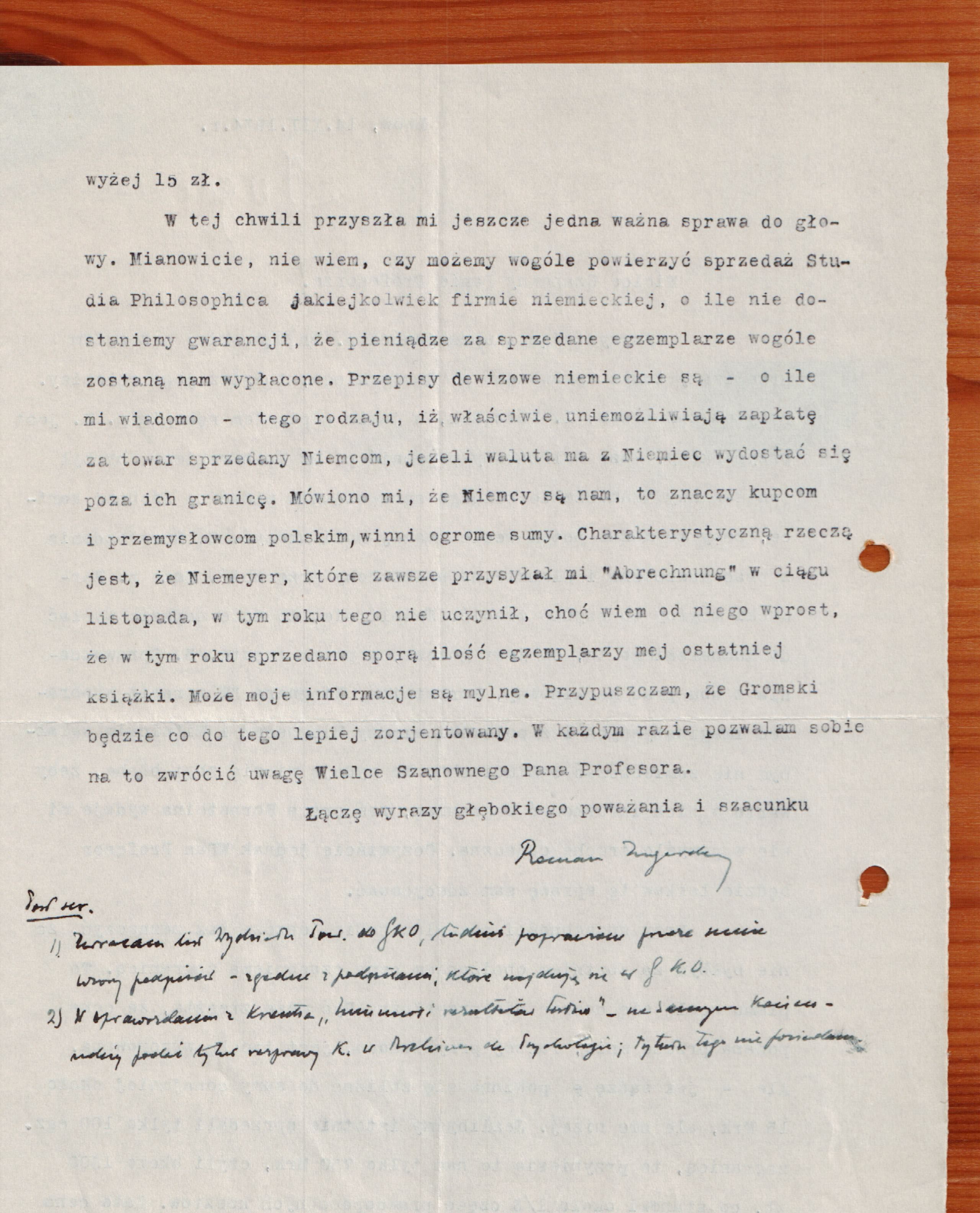 Taking advantage of the courtesy of Dr Dąmbska, I’m sending the transcribed text of Mr Bardecki’s reports, as well as his manuscripts. Here I point out: 1. The order in which I jotted down Mr B’s manuscripts is random. Perhaps Dr Kucharski should be asked to graciously write a translation of each report on a separate sheet, so that later they could be arranged to suit our preference. 2. Reports on the work of Auerbach and Blaustein  should be reworked. Maybe Mr Bardecki could do this quickly. If not, perhaps as of now it’d be possible to send Kucharski what’s ready, and the rest later. 3. I’d prefer not to place the reports on both of Markinówna’s papers, as well as on Bornstein’s, Wiegner’s ‘W sprawie wyobrażeń imaginatywnych’ [On imaginative images], and on the polemics between Wiegner and Witwicki in Studies [Studia Philosophica], because they seem too trivial to me to be worth reporting abroad, while Bornstein’s paper seems to me a bit whimsical in its concept. However, of course you’ll graciously decide this matter yourself.

Given this opportunity, I’m taking the liberty of pointing out once again that I wouldn’t be in favour of lowering the price of the journal abroad too much. The journal isn’t well served thereby. In any case, the price I gave (rather as an example) may be slightly exorbitant. But – I think it should be closer to a total of at least around 15 marks, but not lower. If we really sold only 100 copies abroad, it would bring us only 750 marks, or approximately 1,500 zlotys, which constitutes about 1/3 of the probable costs. But the domestic price should be significantly lower, I suppose about 10 or at most 15 zlotys.

Just now, another important matter came to mind. Namely, I don’t know whether we can entrust the sale of Studia Philosophica to any German firm whatsoever unless we obtain a guarantee that the money for copies sold will actually be paid to us. The German currency regulations are – as far as I know – such that they actually prevent payment for goods sold to Germans if the currency is supposed to cross the country’s borders. I’ve been told that the Germans owe us, i.e. Polish merchants and industrialists, enormous sums. It’s characteristic that Niemeyer, who always sent me an Abrechnung [an account statement] in November, didn’t do so this year, even though I know directly from him that a large number of copies of my last book were sold this year. Maybe my information is erroneous. I suppose Gromski would be better informed about this. In any case, I’m taking the liberty of drawing your attention to it.

Post script
1) I’m returning the letter from the Department of the Soc. to GKO [Galician Savings Bank] and the sample documents I corrected – consistent with the signatures at G.K.O.

2) In the report on Kreutz’s[O12]  ‘Variability in test results’ – at the very end – it’s necessary to give the title of his dissertation in Archives de Psychologie [French: Archives of Psychology]; I don’t have this title.