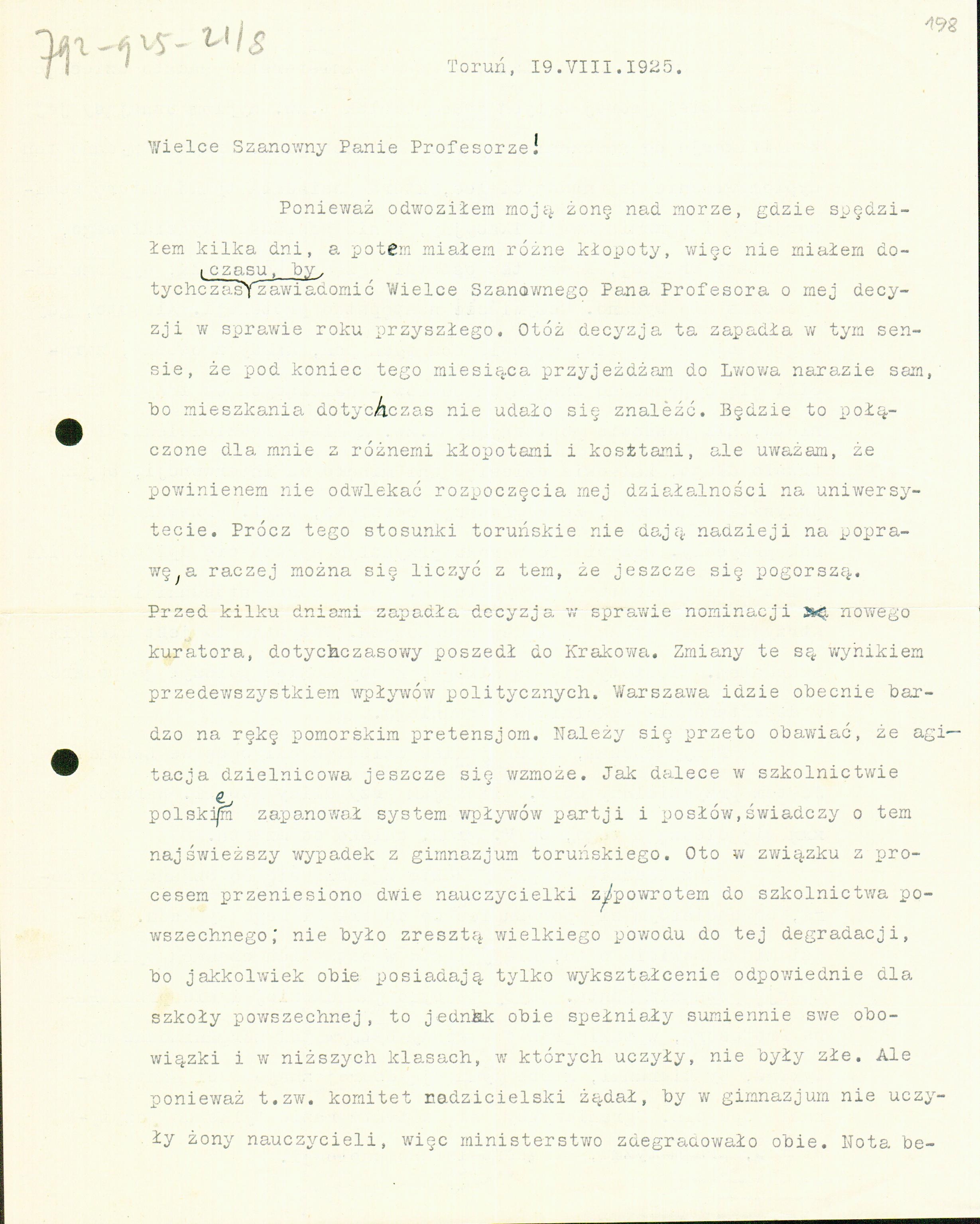 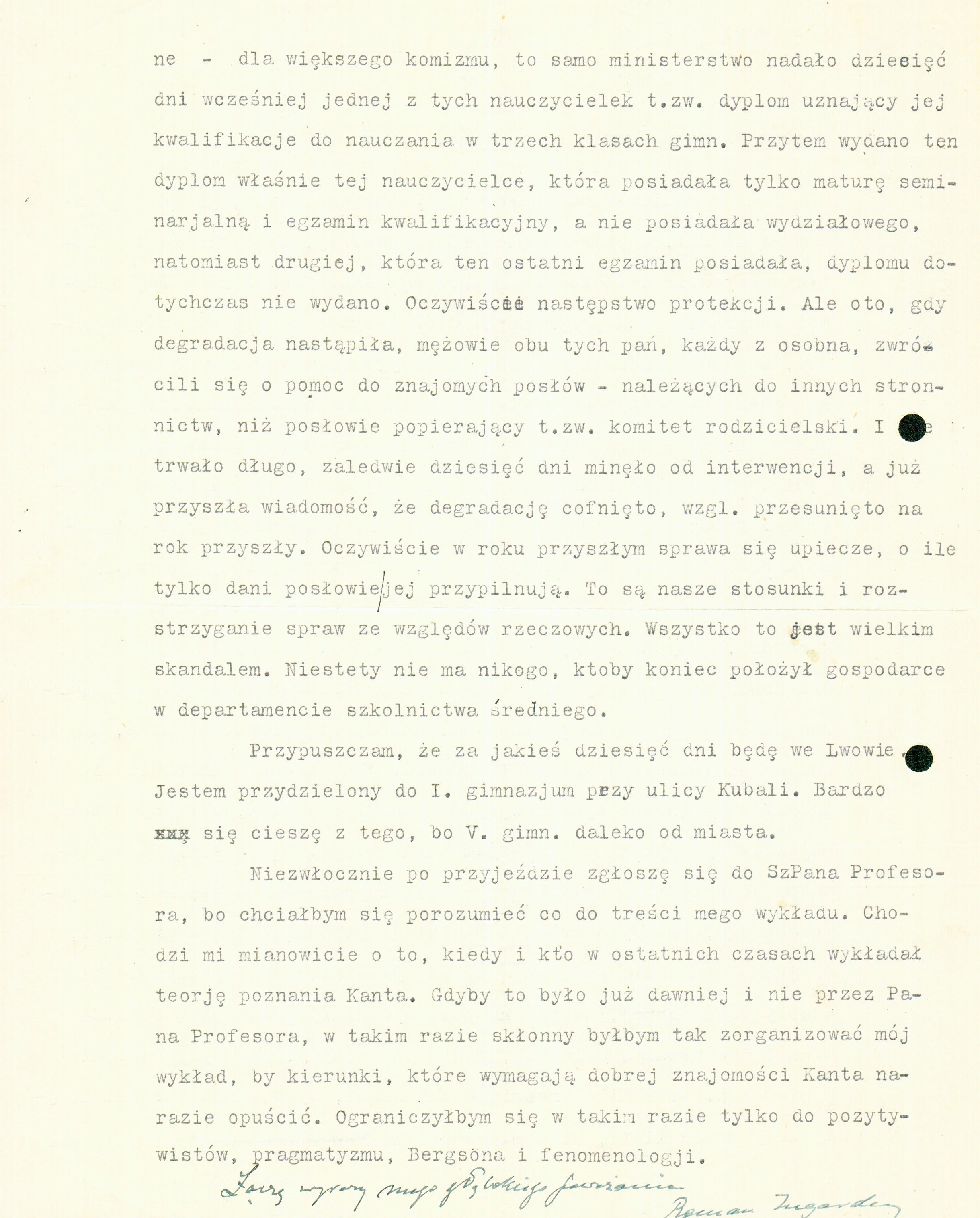 Because I drove my wife to the seaside, where I spent a few days, and then had assorted problems, I haven’t had time until now to inform you of my decision regarding the coming year. Well, the result is that I’m coming to Lviv at the end of this month, alone, for the time being, because it hasn’t been possible to find a flat yet. For me, this will be associated with various problems and costs, but I don’t think I should delay the start of my activities at the university. Moreover, the situation in Toruń offers no hope for improvement; on the contrary, it can be counted on to get even worse. A few days ago a decision was made regarding the appointment of a new superintendent, as the incumbent had gone to Cracow. These changes are the result, first and foremost, of political influences. Warsaw is accommodating Pomeranian claims at present. Therefore it’s to be feared that the agitation in this district will increase. How far the system of the influence of parties and Sejm [Polish parliament] delegates has prevailed in Polish education is evidenced by the latest incident in the Toruń middle school. In connection with this process, two female teachers were transferred back into primary education. There was no real reason for this demotion, since, while in both cases their educational backgrounds are suitable for primary school, nevertheless they both had conscientiously performed their duties and, in the lower classes that they taught, they weren’t bad. But because the so-called parental committee demanded that the wives of teachers shouldn’t teach in the middle school, the ministry demoted both of them. Nota bene: to add to the comedy, ten days earlier the ministry itself had given one of these teachers a diploma acknowledging her qualifications to teach three classes of middle school. At the same time, this diploma was issued to the teacher who possessed only a seminarial matura and a qualifying, not a departmental, exam, whereas the other, who had the latter exam, hasn’t yet been awarded a diploma. A consequence of favouritism, obviously. But when the demotion went through, the husbands of both of these ladies, each of them individually, turned for help to delegates of their acquaintance – who belonged to different parties than those supporting the so-called parental committee. And it wasn’t long afterwards – hardly ten days had passed – that the news arrived that the demotion had been withdrawn, or postponed until next year. Of course, next year the matter will heat up, provided the delegates in question keep an eye on it. That’s our situation and our way of settling these matters. It’s all a huge scandal. Unfortunately, there is nobody to put an end to this business in the secondary school department.

Immediately upon arrival, I’ll report to you, because I’d like to talk about the content of my lecture. Specifically, I’m concerned about who’s lectured recently on Kant’s theory of cognition, and when. If it was already some time ago, and it wasn’t you yourself who lectured, I’d be inclined in that case to organise my lecture in directions which would require setting aside close acquaintance with Kant for the time being. In that case, I would limit myself only to positivists, pragmatism, Bergson, and phenomenology.

Attachement to the letter to Henryk Markiewicz written 16.03.1964