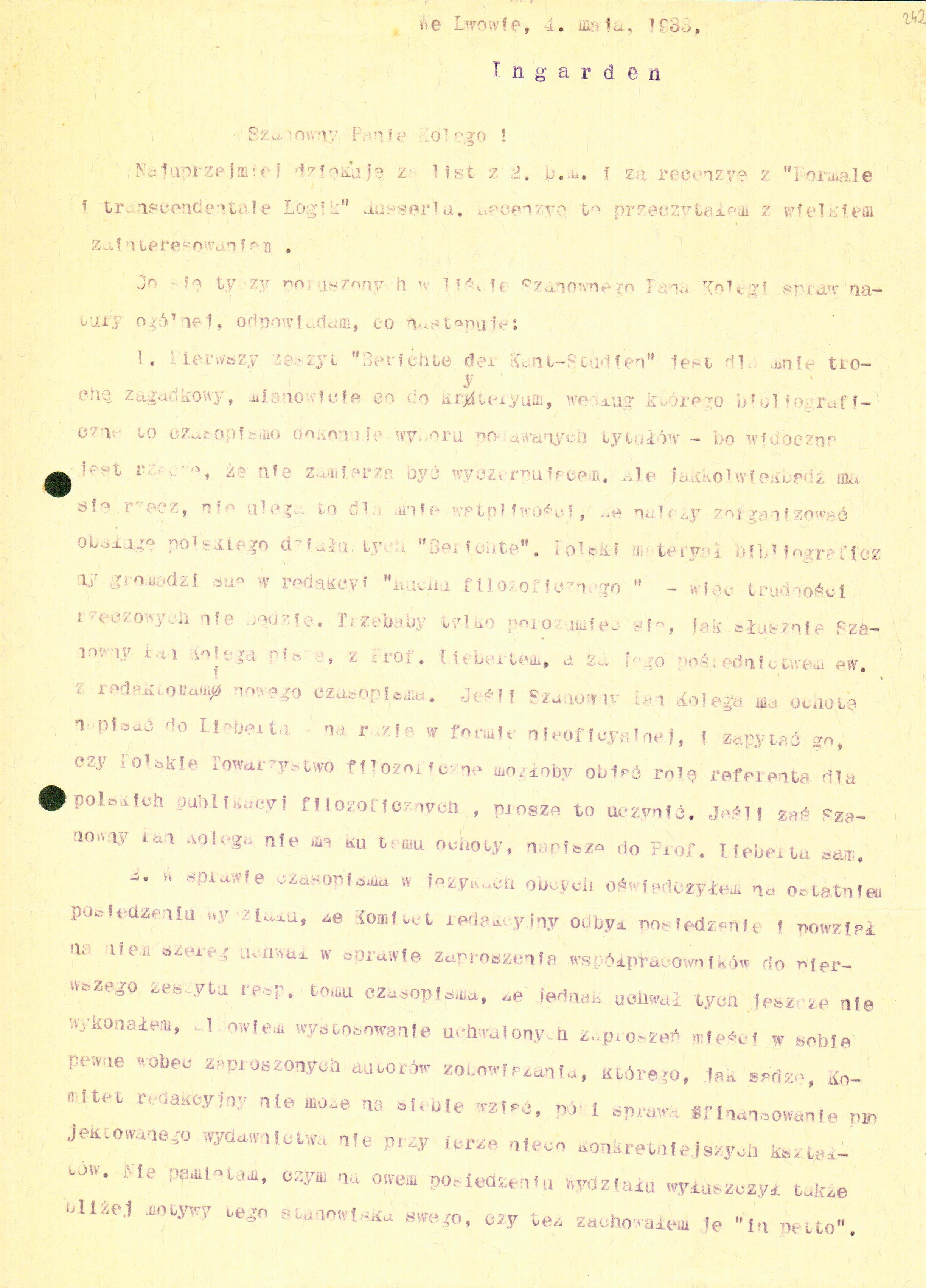 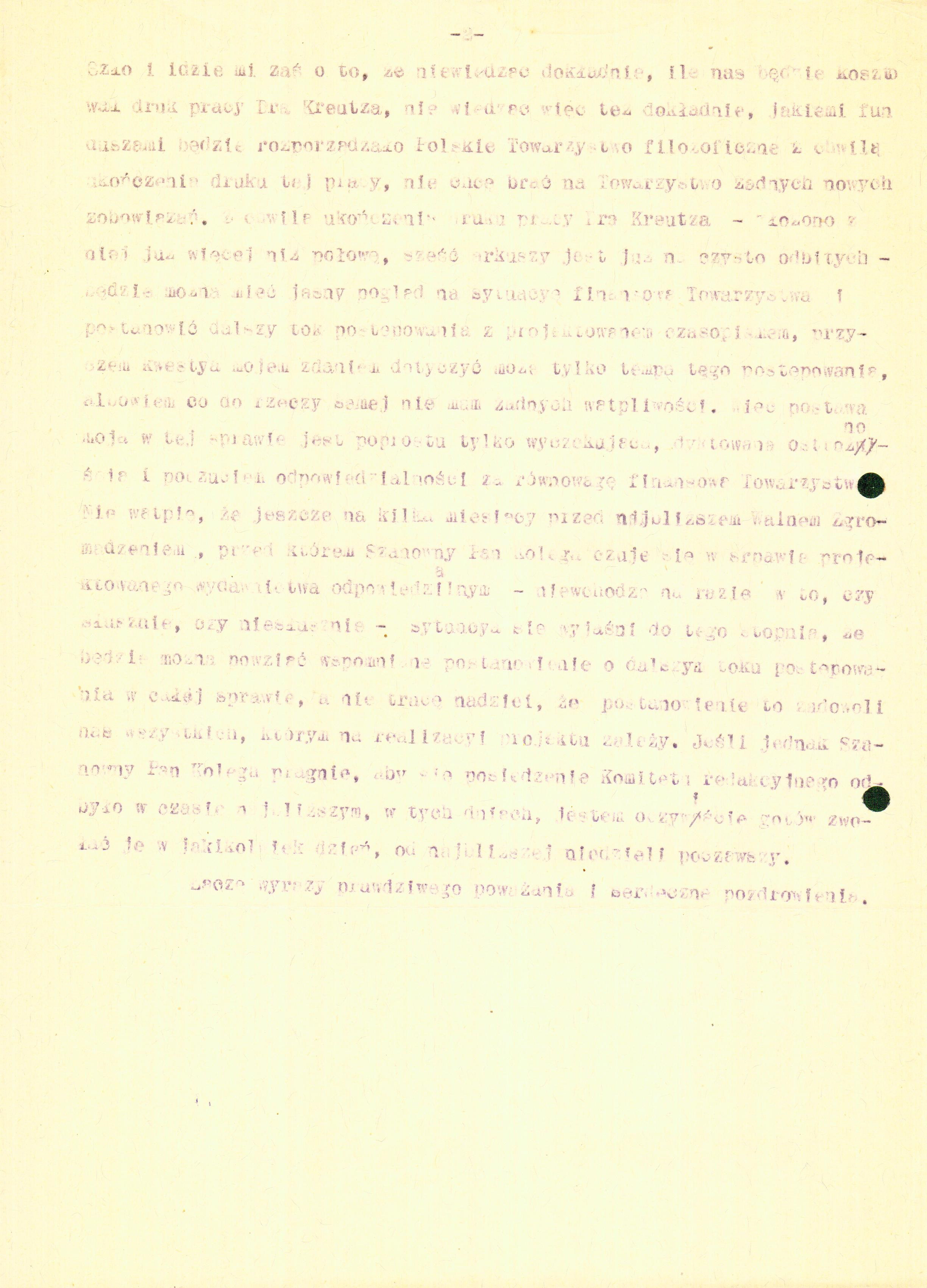 Thank you most kindly for your letter of the 2nd of this month and for the review of Husserl’[O1] s Formale i transcendentale Logik[O2]  [Formal and transcendental logic]. I read this review with great interest.

As regards the matters of a general nature raised in your letter, my answers are as follows:

1. I find the first issue of Berichte der Kant-Studien [Reports on Kant studies] a bit puzzling, specifically regarding the criteria according to which this bibliographical journal selects the given titles ‒ because it clearly isn’t intended to be exhaustive. Be that as it may, however, for me there can be no doubt regarding the necessity of placing a Polish section in these Berichte. Polish bibliographic material is gathered in the editorial offices of Philosophical Movement, and therefore there won’t be any material difficulties. It would be necessary only to communicate, as you rightly indicate, with Prof. Liebert[O3] , and eventually, through him, with the editors of the new publication. If you wish to write to Liebert – in an unofficial capacity, for now – and to ask him whether the Polish Philosophical Society might fulfil the role of reporter for Polish philosophical publications, please do so. If, however, you don’t wish to do this, I’ll write to Prof. Liebert myself.

2. As for the matter of the journal in foreign languages, I stated at the last Department meeting that the editorial Committee had held a meeting at which it adopted a series of resolutions on the invitation of collaborators for the first issue or volume of the journal, but that as of yet I had not implemented these resolutions, as the issuing of these invitations involves certain obligations to the invited authors, which I don’t think the editorial Committee can take upon itself until the matter of financing the projected publication assumes a more concrete form. I don’t remember whether,[O4]  at this meeting of the Department, I also expounded on[O5]  the motives for my position in greater detail, or whether I kept them in petto [Italian: in my chest, i.e. under wraps, to myself, etc.] My point was, and is, that, not knowing exactly how much it would cost us to print Dr Kreutz’s [O6] paper, and thus likewise not knowing exactly what kind of funds the Polish Philosophical Society would have at its disposal at the completion of printing of this paper, I didn’t want the Society to take on any new obligations. With the completion of the printing of Dr Kreutz’s paper – more than half of which has already been typeset, and six signatures already printed – it’ll be possible to get a clearer view of the Society’s financial situation and to decide on the future course of proceedings concerning the projected journal, in regard to which it’s a question, in my opinion, only of the pace of these proceedings; as to the thing itself I have no doubts. Thus my position in this matter is simply one of ‘wait and see’, dictated by caution and a sense of responsibility for the financial equilibrium of the Society. I don’t doubt that several months before the next General Assembly, in relation to which you feel responsible for the issue [O7] of the projected publication – whether justifiably or not, which I won’t go into at the moment – the situation will be clarified to the point that it’ll be possible to make the aforementioned decision concerning the future course of proceedings in the matter as a whole, and I haven’t lost hope that this decision will satisfy all of us who care about the implementation of the project. However, if you wish a meeting of the editorial Committee to be held in the near future, of course I’m prepared to convene it on any day, starting with next Sunday.

I enclose expressions of genuine esteem and cordial greetings.[O8]

Letter to the Committee of the Library of Classics of Philosophy written 15.02.1954