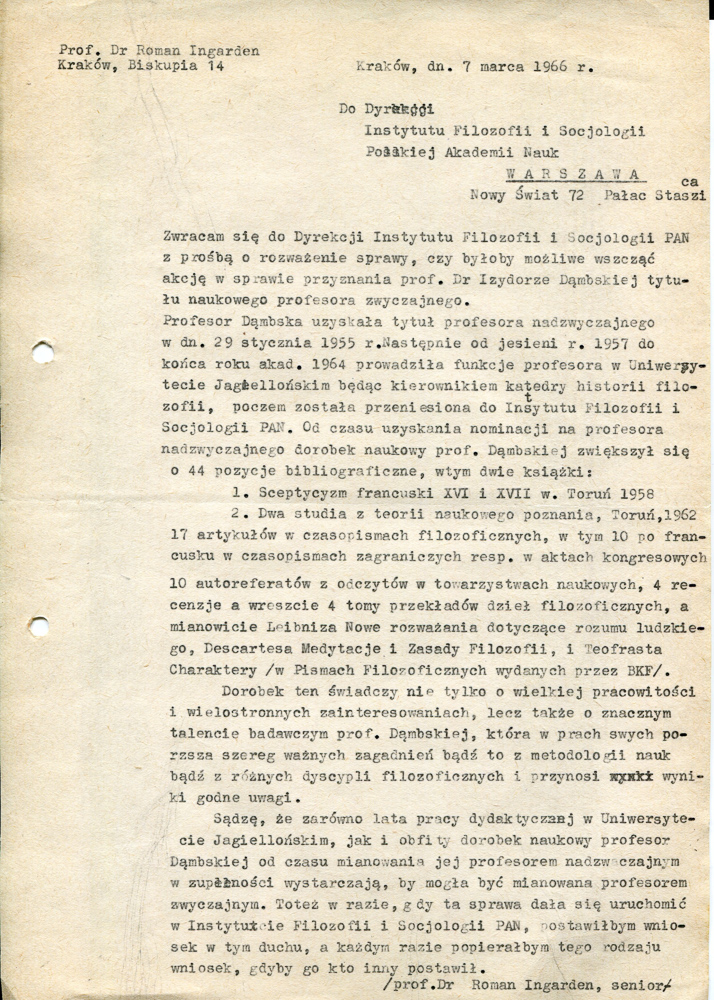 I am writing to the Management of the Institute of Philosophy and Sociology of the Polish Academy of Sciences with a request to consider whether it would be possible to initiate the process of granting associate professor Izydora Dąmbska the title of full professor. Professor Dąmbska obtained the title of associate professor on January 29, 1955. Following that event, from autumn 1957 until the end of the academic year 1964 she was working in the position of professor at the Jagiellonian University and acting as the head of the Chair of History of Philosophy, before being transferred to the Institute of Philosophy and Sociology of the Polish Academy of Sciences. Since the nomination for associate professor the scientific achievements of prof. Dąmbska increased by 44 bibliographic items, including two books:
c       1. French skepticism of the 16th and 17th centuries, Toruń 1958
c       2. Two studies in the theory of scientific cognition, Toruń, 1962
17 papers in philosophical journals, including 10 in French in foreign magazines as well as 10 reports from lectures in scientific societies the records of the Congress, 4 reviews, and finally 4 volumes of translations of philosophical works, namely Leibniz’s New Essays Concerning Human Understanding, Descartes’ Meditations and Principles of Philosophy, and the Characters of Theophrastus / in Philosophical Journals published by the Library of the Classics of Philosophy /.
c       These achievements show not only of great diligence and numerous interests, but also prof. Dąmbska’s considerable talent for research, as she raises and elaborates on a number of important issues in her works, whether they be from the methodology of the sciences or various philosophical disciplines, and produces noteworthy results.
c       I think that both the years of didactic work at the Jagiellonian University and professor Dąmbska’s abundant scientific achievements since her appointment as an associate professor are sufficient for her to be appointed full professor. Therefore, if this process could be initiated at the Institute of Philosophy and Sociology of the Polish Academy of Sciences, this is a proposal I would put forth or support if it were to be issued by someone else.