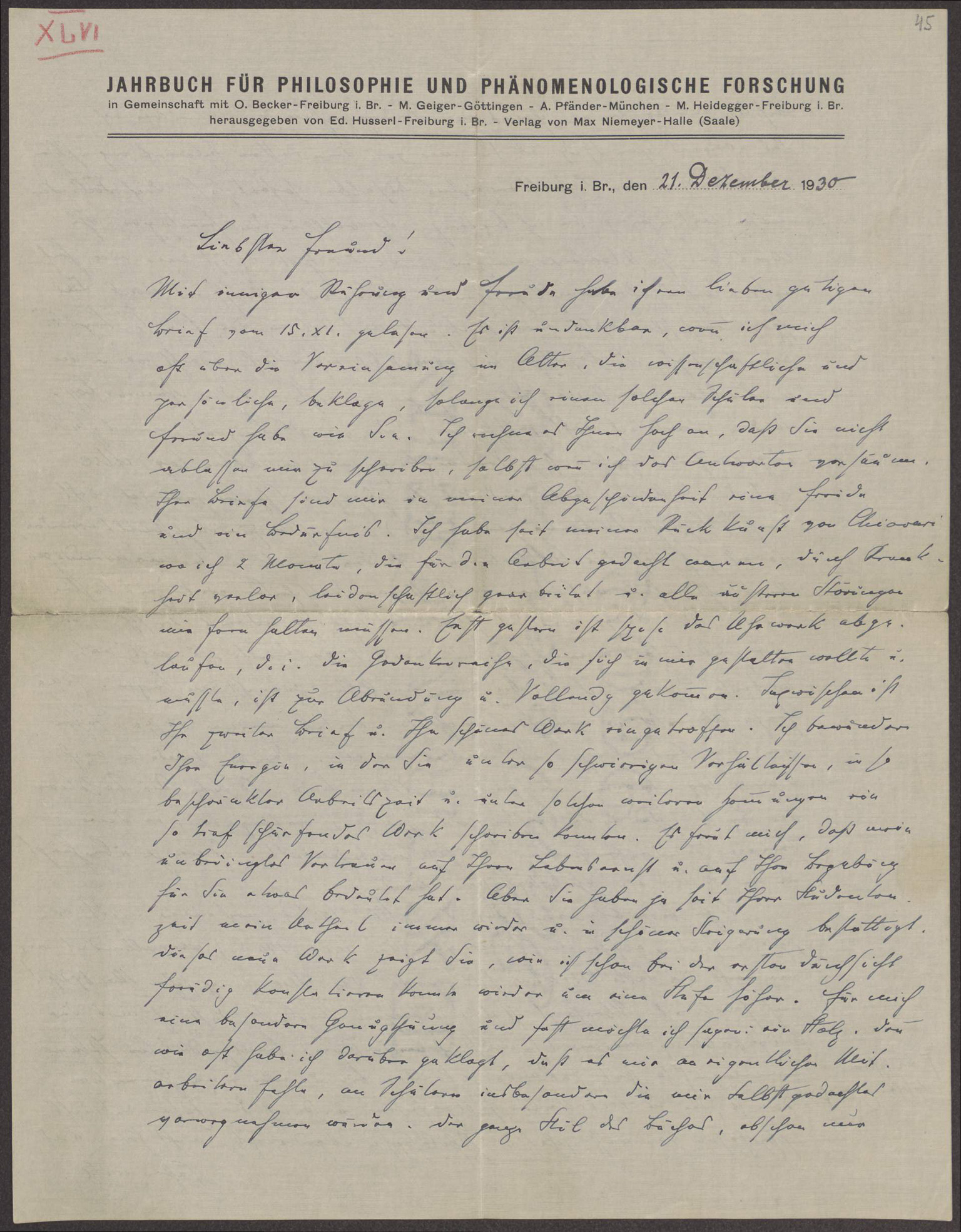 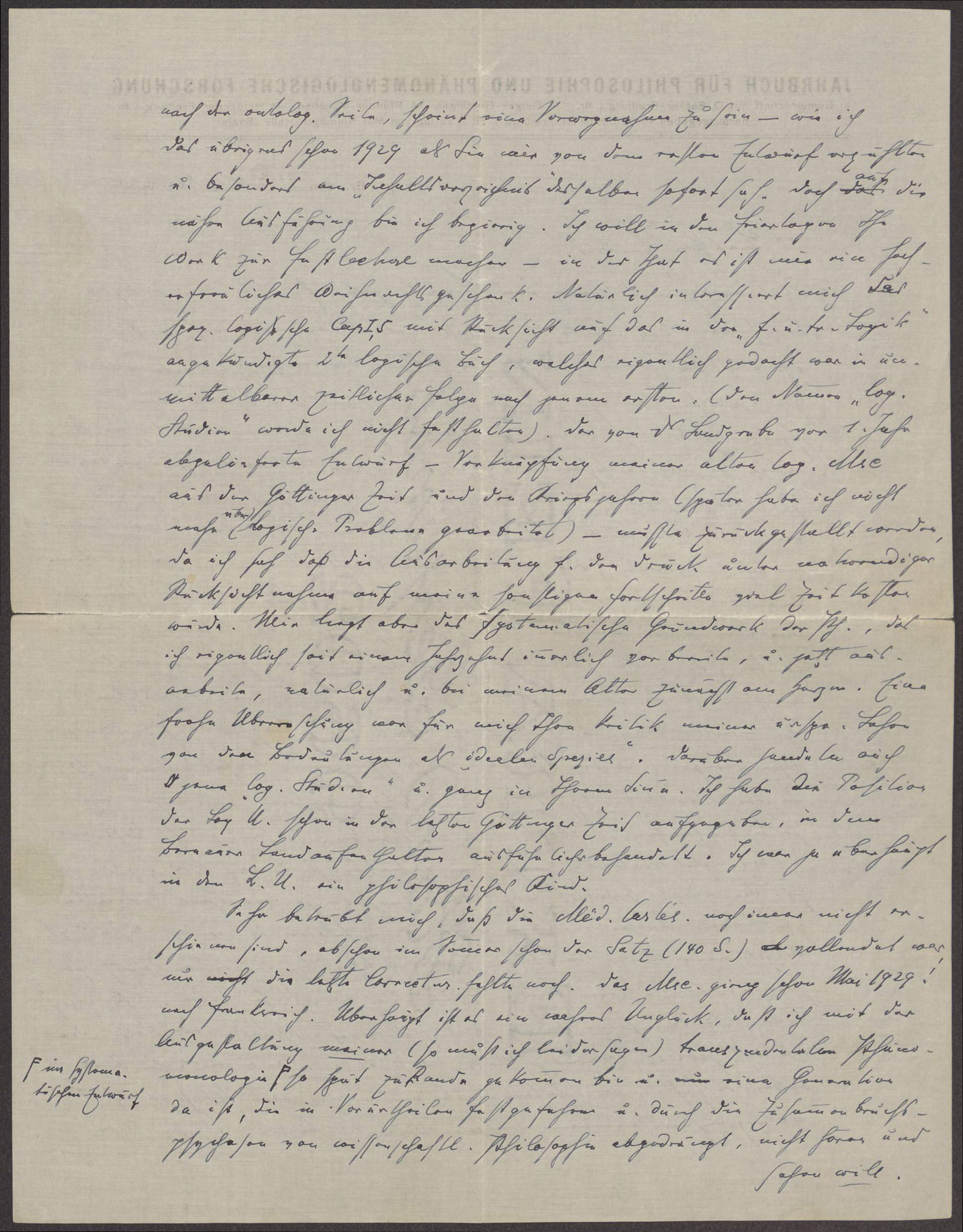 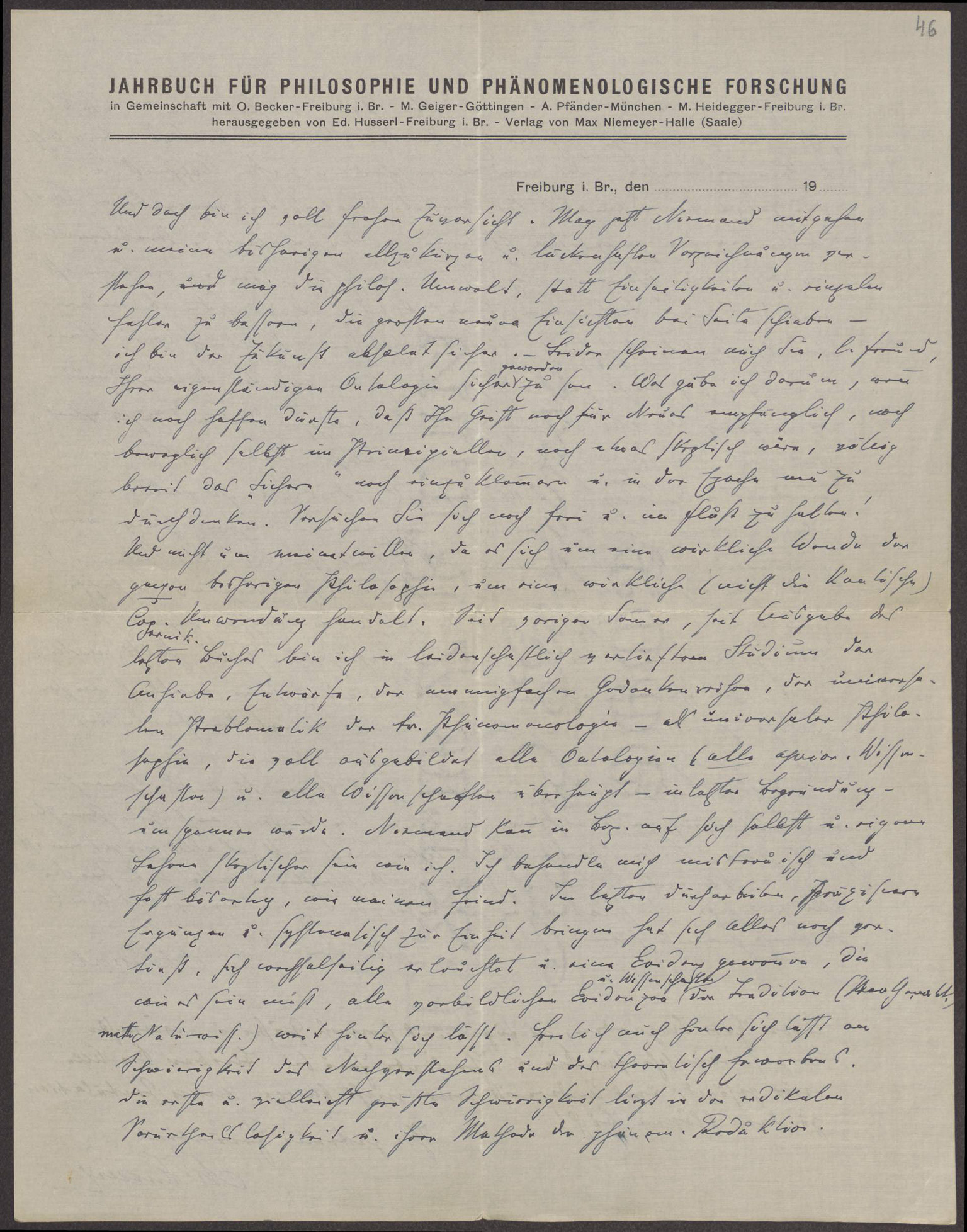 With heartfelt emotion and joy, I read your kind letter dated 15.XI. It is ungrateful of me to complain about my loneliness in old age, on a scientific and personal level, as long as I have a student and friend like you. It means a lot to me that you do not cease to write to me, even if I take a long time to reply. Your letters are a joy and a necessity in my state of seclusion. Since my return from Chiavari, where I lost two months that were meant for work to illness, I have been working fervently and attempted to keep away from all external interruptions. It wasn’t until yesterday that the series of thoughts that I wanted to and had to shape in my mind came to completion and perfection. In the meantime, I received your second letter and your beautiful work.48 I admire your energy, that you were able to write such a profound work under such difficult circumstances with such limited time to work on it and considering the other obstacles. I am glad that my unconditional trust in your sincerity and in your talent and ability means something to you. But you have confirmed my confidence in you repeatedly since you were my student, and you even exceeded my expectations. This new work shows, as I was able to gladly determine at first glance, that you have once again arrived at a higher level. This gives me special satisfaction and I would almost say I feel a sense of pride. Many times, I complained that I lacked actual employees, especially students, who would anticipate my self-conceived thoughts and ideas. The whole style of the book, beginning after the ontol[ogical] page appears to be an anticipation – by the way, I immediately recognized this in 1929 when you told me about the first draft and particularly about the “table of contents.” I am eager to read every detail. I want to make your work my festive book for the holidays – in fact, it is a most enjoyable Christmas present for me. Of course, I am interested in the spec[ific] logical chap[ter] I, 5, in consideration of the second book on Logic announced in F[ormal] and Tr[anscendental] Logic which was originally to be published immediately after the first volume (I will not keep the name “Log[ical] Studies”). The draft prepared by Dr. Landgrebe a year ago – a compilation of my old log[ical] manuscripts written in Göttingen and during the war (later, I did not work on logical problems) – had to be put on hold because I realized that the editing and preparation for print would take a long time and would keep me from working on my other projects. However, at my advanced age, I am mostly concerned with the completion of the systematic foundation of ph[enomenology], which I have been working on conceptually for a decade and which I am now putting together.49 A welcomed surprise for me was your criticism of my orig[inal] theory of meanings as “ideal species.” The “log[ical] studies” cover this subject to the same effect in accordance with your requirements. I abandoned my position on the Log[ical] I[nvestigations] as early as during the end of my time in Göttingen and covered them in more detail while I was staying in the countryside in Bernau. After all, during the time of L[ogical] I[nvestigations], I was a philosophical child.

It saddens me that Méd[itations] Cartés[iennes] has still not been published, although the draft had been completed in the summer (140 pages), but it was supposed to be proofread one more time. The manuscript was sent to France in May 1929. In any case, it is a real disaster that I have taken so long with the creation of my structure of transcendental phenomenology and the systematic design, and now there is a generation that is stuck in prejudice, does not listen and refuses to see due to the collapsed psychoses of scientific philosophy. Nevertheless, I remain confident. Even if no one follows me now, and if no one understands my recent and all too short and incomplete preliminary ideas, and if the philosophical environment, instead of correcting one-sidedness and individual mistakes, overlooks the great new insights – I am absolutely confident in the future. Unfortunately, you too, dear friend, seem to have become certain of your independent ontology.50 What I wouldn’t give to hope that your mind was still receptive to the new, still agile, even regarding general matters or somewhat skeptical; completely ready to bracket the “certainties” and to rethink these things as an epoché. Try to remain free and keep your ideas flowing! And do not do this for my sake, since it is a real turning point in all of the previous philosophy, a real Copernic[an] (not a Kantian) turning point. Since last summer, since publication of the last book, I have been passionately studying attempts, drafts, and the manifold lines of thought, the universal problem of tr[anscendental] phenomenology – as a universal philosophy, which fully formed would encompass all ontologies (all a prior[i] sciences) and all sciences in general – as final reason. No one is more skeptical of one’s own work and theories than me. I treat myself suspiciously and almost viciously, as if I were my own enemy. During the last round of reviewing, defining, completing and systematically unifying, everything has deepened, mutually enlightened and established evidence which, as it must be, left all exemplary evidence and traditional sciences (mathematics, math[ematic] natural scie[nces]) far behind. Of course, the difficulty of following and understanding and theoretical learning is left behind, too. The first and perhaps the greatest difficulty lies in radical impartiality and the method of phenom[enological] reduction. The latter, understood by none of my former students, now undergoes a multifaceted illumination, which leaves nothing in the dark and can no longer be avoided. This alone will make up a big chapter and it will be followed by the classification of the constit[utive] analysis of the “predetermined world” followed by genetic phenom[enology] and “metaphys[ical]” problems, i.e. metaphysical in the specific phenomenological sense. Then, the absolute is directly explored through transc[endental] subjectivity and through the special transcendental experience. Perhaps my way of direct instruction and analyses will become accessible to you if you are not too committed to ontologism. I would feel lucky to be able to experience this. You would not lose ontology (and metaphysics) but regain it in a deeper sense and method[ology]. (Please wait with the planned critical dispute!)

It will take a lot of time to complete this, but I certainly hope to be able to at least publish the first half of it in the next Yearbook (autumn 1931). My gifted Fink is helping me; I would be lost without him. You should read his exemplary work I in Yearbook XI. The second installment will be published in Yearbook XII (approximately 15-18 pages).

I was sad to hear how much you and your wife worried in the beginning of autumn because of the various illnesses of your children, and your wife’s illness. Unfortunately, you did not mention in your last letter if everyone is doing well now.

Well, my f[riend], I wish you a merry Christmas and a happy New Year. You deserve some rest now, because you have completed a valuable piece of work.

I am sending you and your wife warm regards, wishing you a happy New Year! Most importantly, I hope this letter finds you and your family well. I am not concerned about other things. Congratulations on the great book! Your faithful friend,