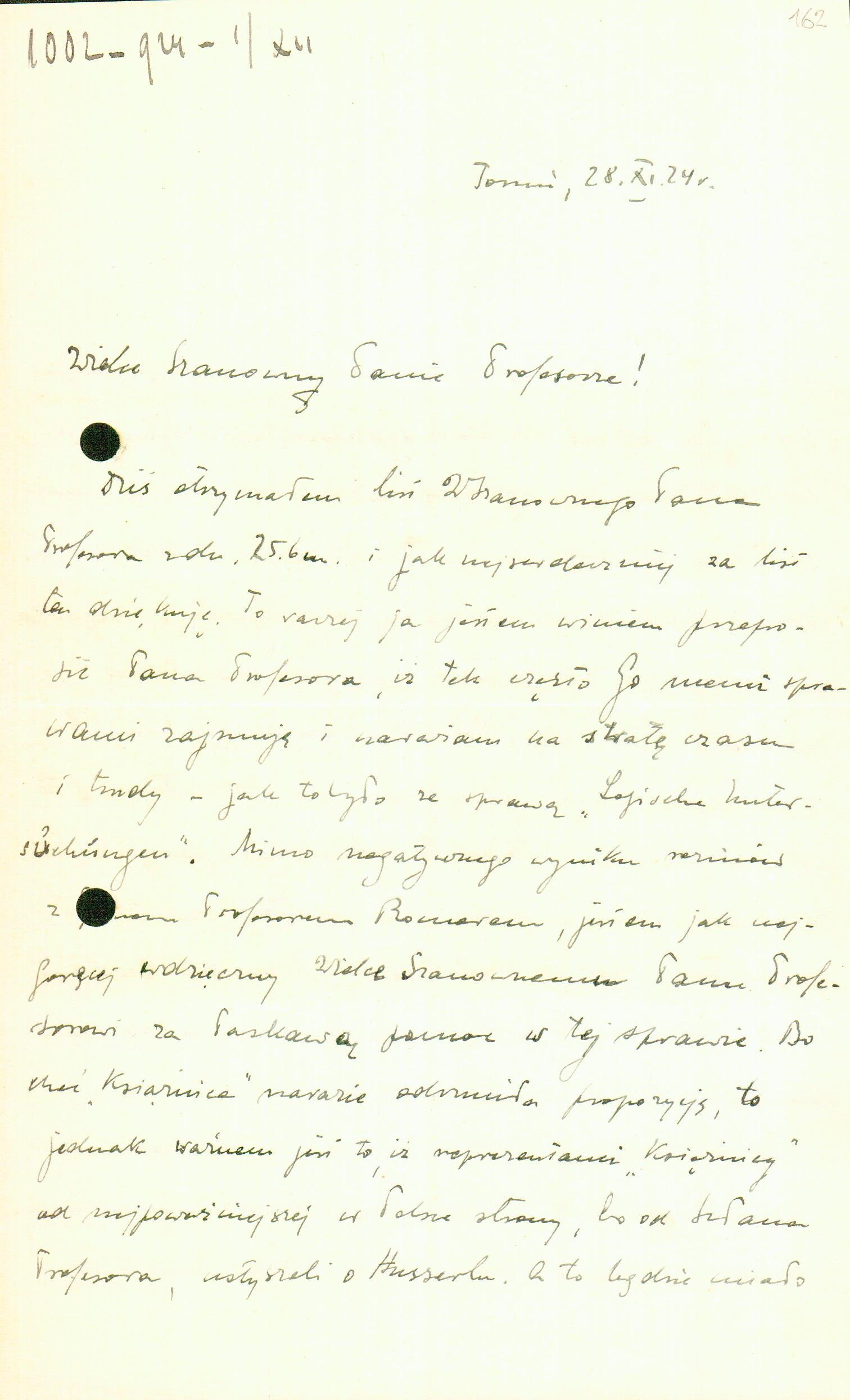 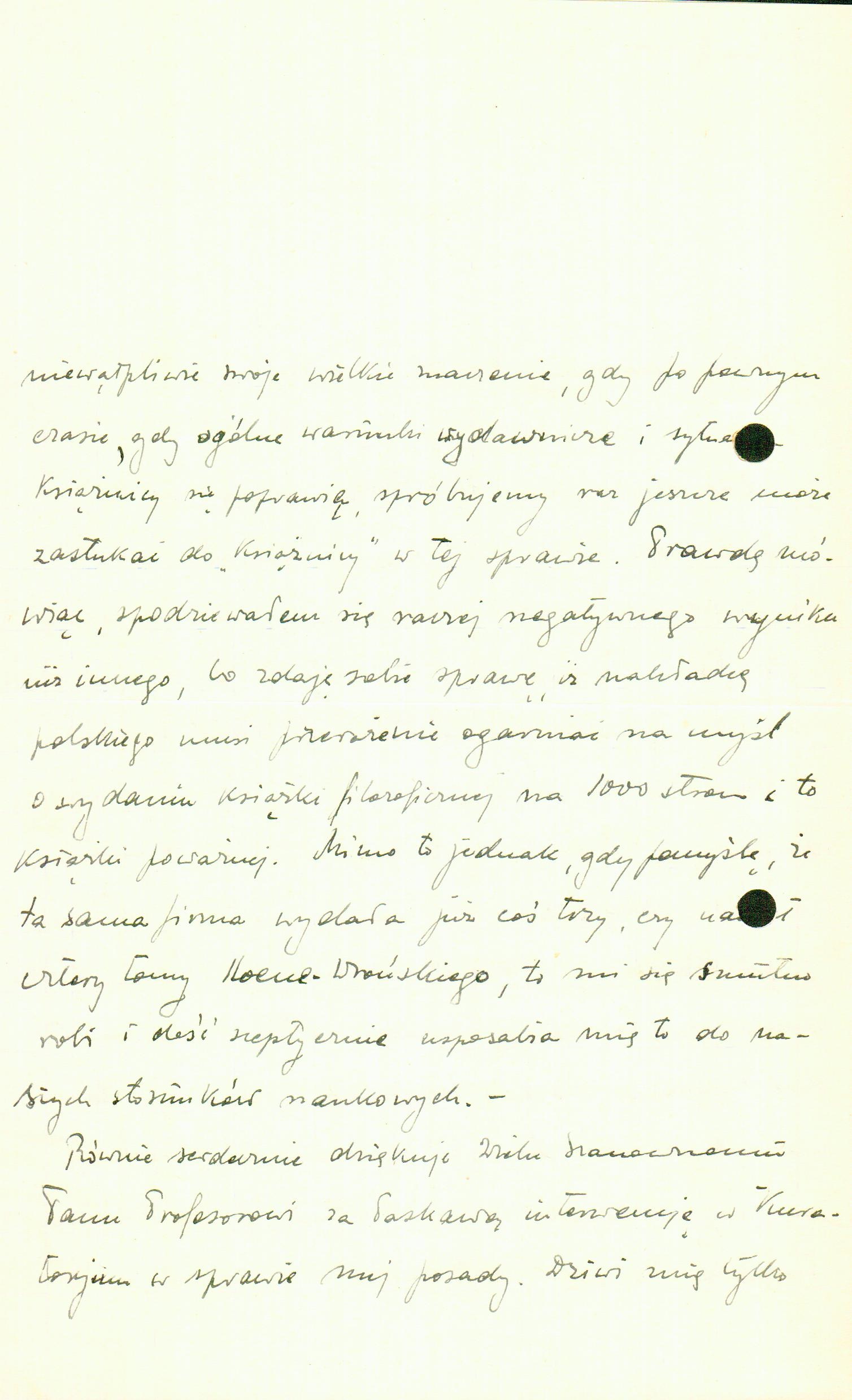 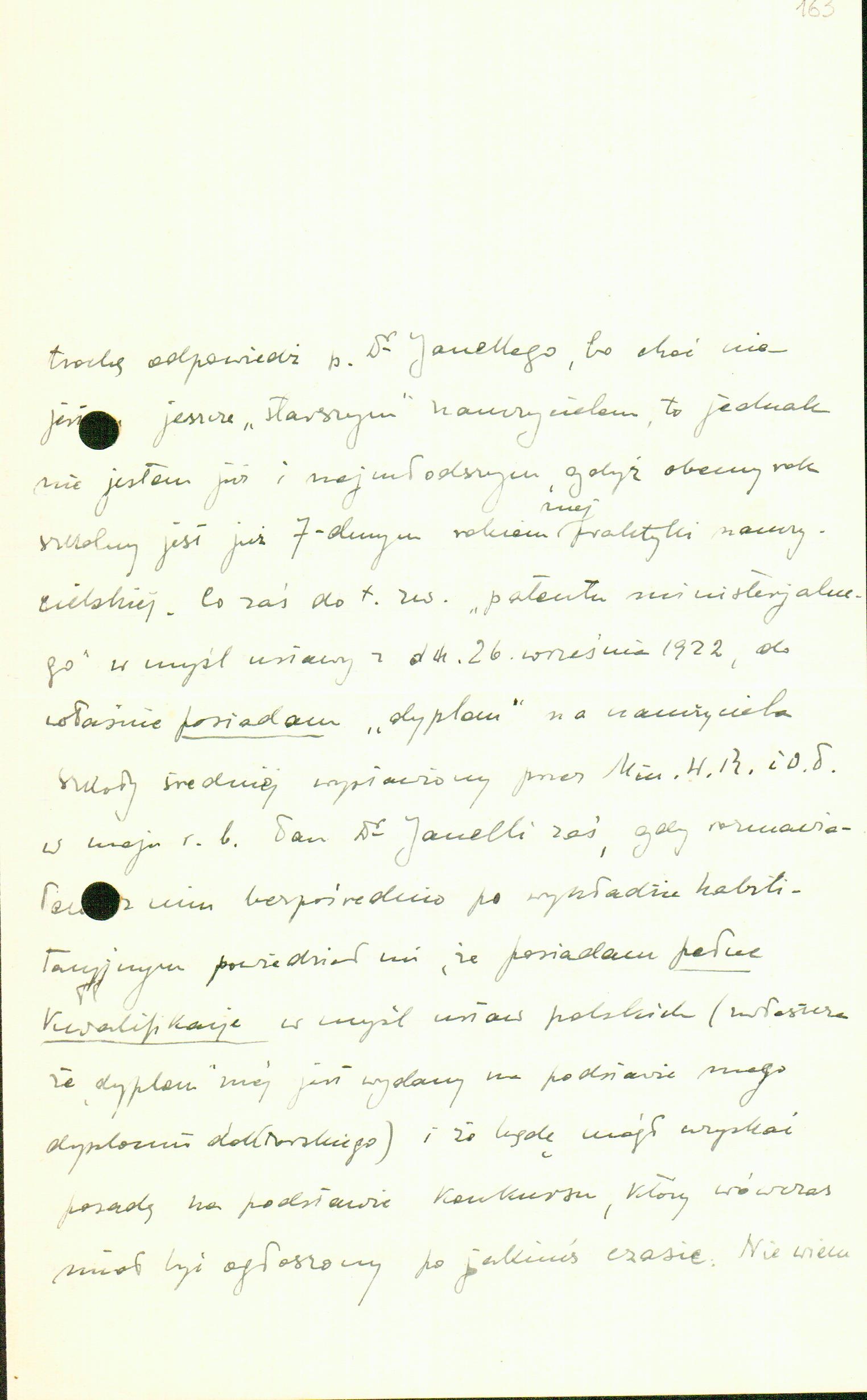 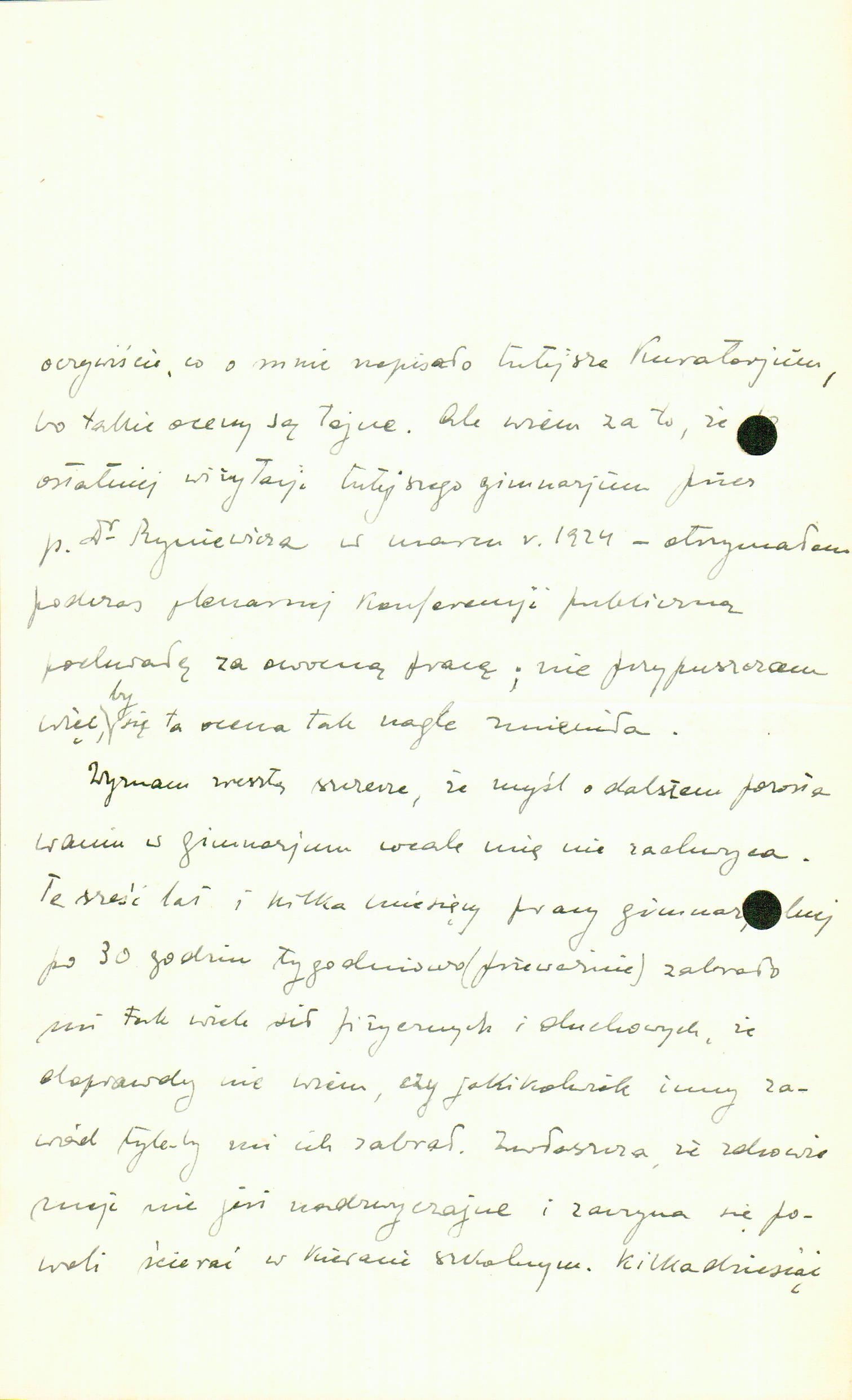 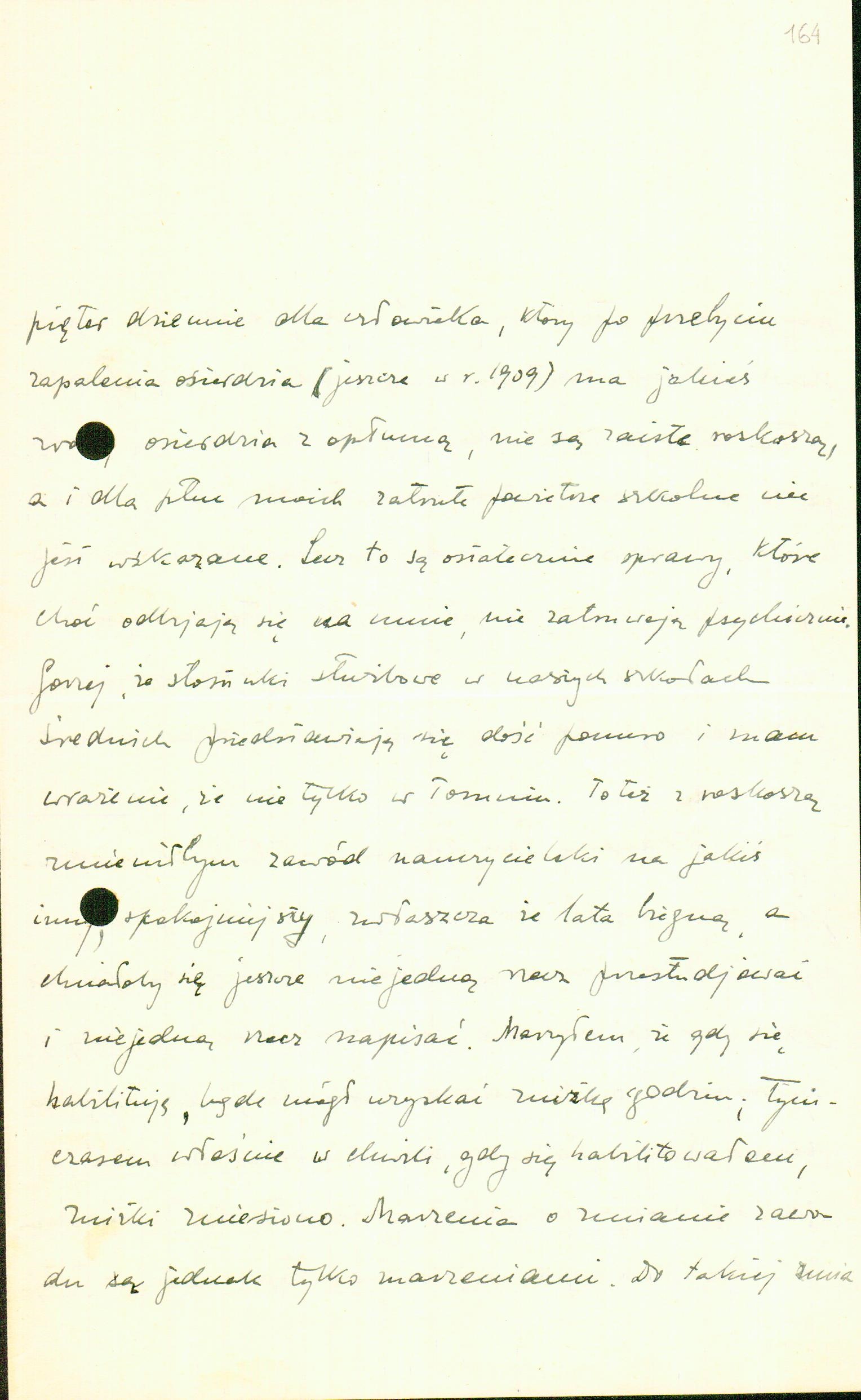 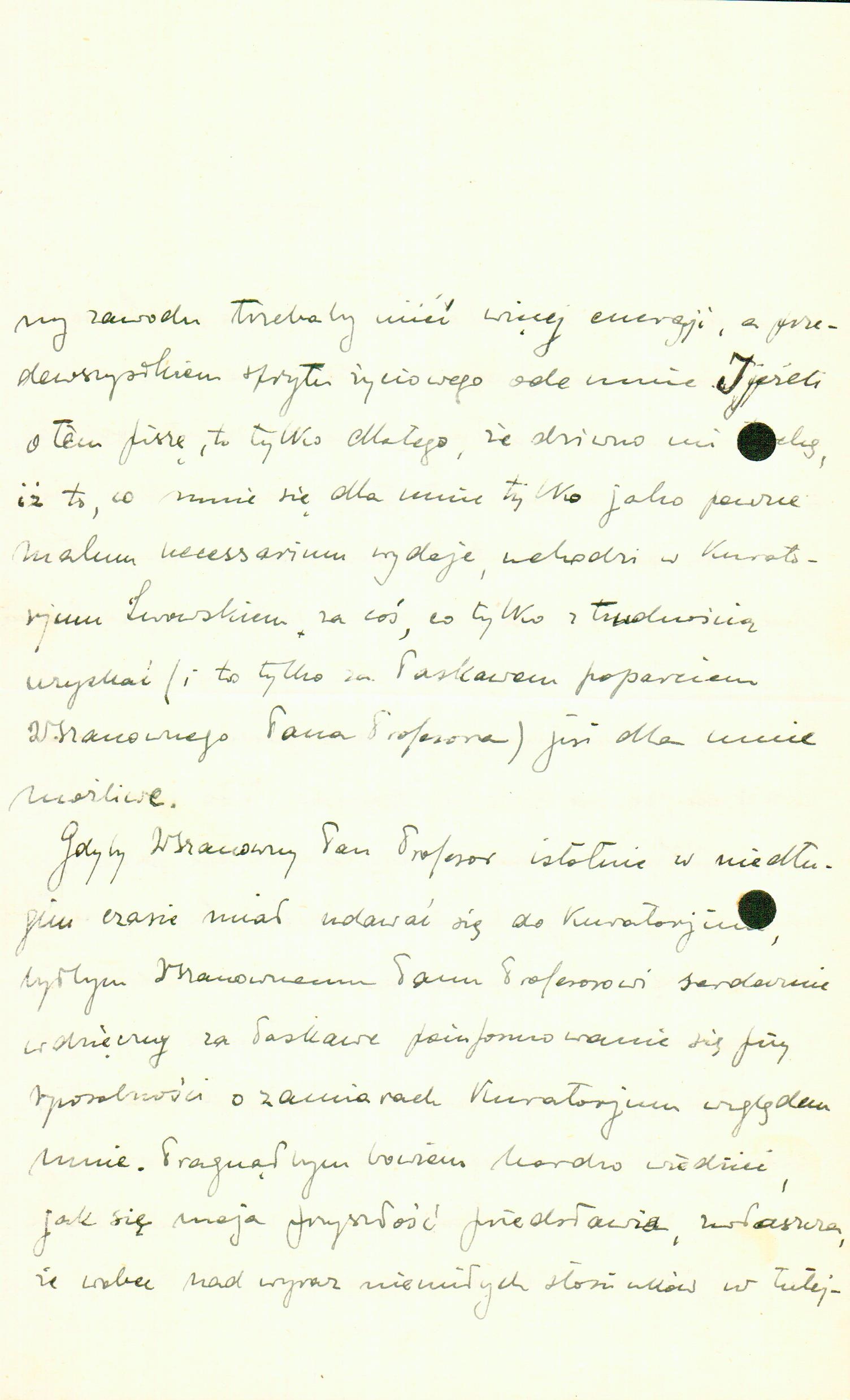 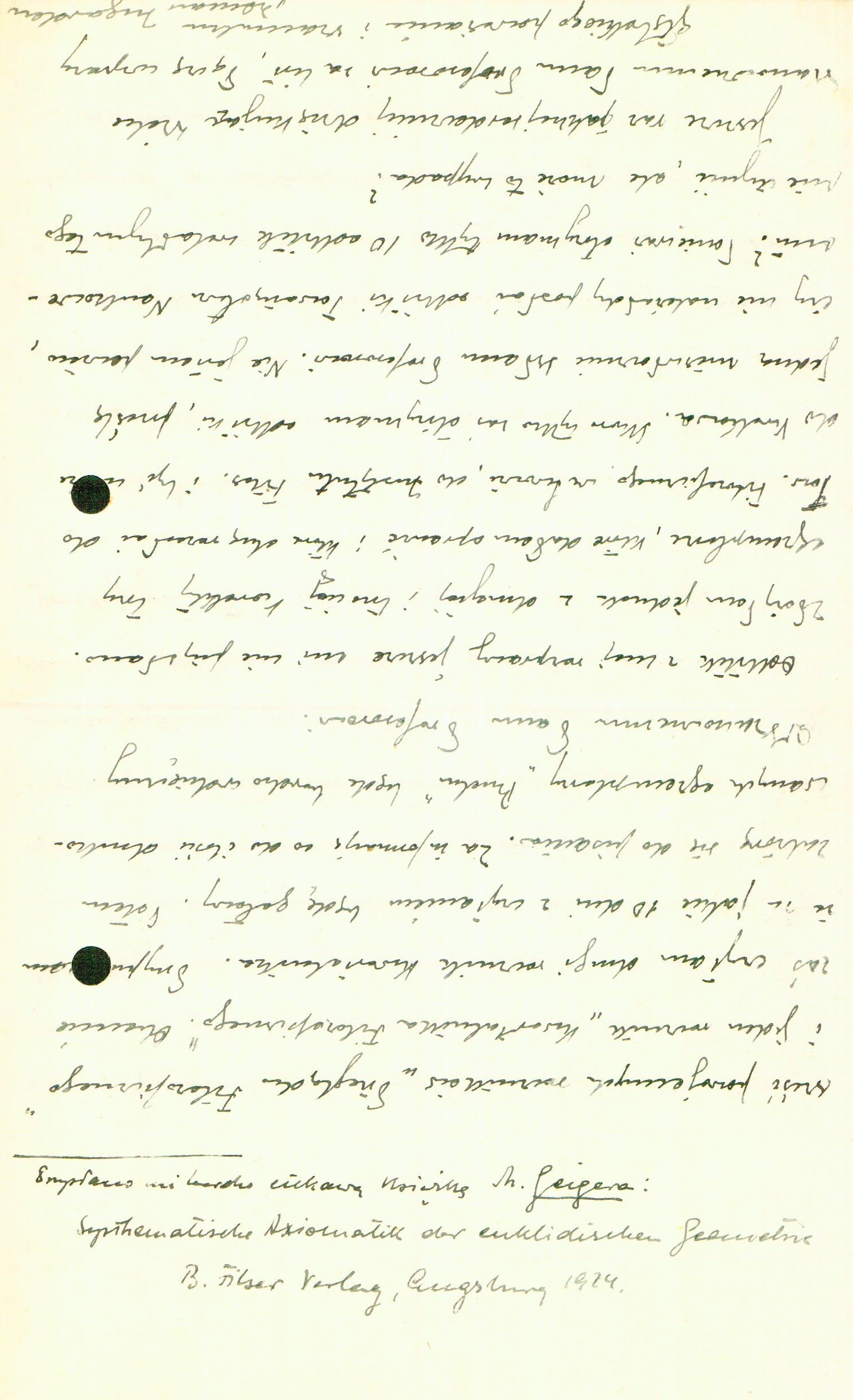 Today I received your letter of the 25th of this month, for which I most cordially thank you. It’s rather I who should apologise to you, for burdening you so often with my affairs and subjecting you to wasted time and trouble – as in the case of Logische Untersuchungen. Despite the negative result of your conversations with Professor Romer, I’m most fervently grateful to you for your gracious help in this matter, because even though Library has rejected the proposal, it’s nevertheless important that its representatives should hear about Husserl from the most serious source in Poland, i.e. yourself. And this will undoubtedly be of great importance, when, after some time, when general publishing conditions and Library’s situation improve, we make another attempt to knock on Library’s door in regard to this matter. To tell the truth, I was expecting a negative result rather than anything else, because I realise that a Polish publisher must be horrified at the thought of publishing a philosophical tome of 1,000 pages, and an important book at that. Nevertheless, when I think that the same firm has already issued something like three or even four of Hoene-Wroński’s books, it makes me sad, and predisposes me to be rather sceptical as to our academic situation. ‒

I also cordially thank you for your gracious intervention with the Board regarding my position. I’m only a bit surprised at Dr Janelli’s response, since, whereas I’m not yet an ‘older’ teacher, I’m no longer one of the youngest, given that the current school year is already the seventh of my teaching career. As for the ‘ministerial patent’ in accordance with the Act of 26 September 1922, I do indeed possess a ‘diploma’ for secondary school teachers, issued by the Ministry of Religious Denominations and Public Education in May of this year. Dr Janelli, when I talked to him immediately after the habilitation lecture, told me that I possessed full qualifications according to Polish law (especially since my ‘diploma’ was issued on the basis of my doctoral degree) and that I would be able to obtain a position based on the competition which, at that point, was to be announced after some time. Of course, I don’t know what the local Board wrote about me, because such assessments are confidential. But I know that, following the last visit to the local middle school by Dr Ryniewicz [O1] in March 1924, I received, during a plenary conference, public praise for productive work; I don’t suppose, then, that this assessment would change so suddenly.

In any case, I sincerely confess that I’m not at all enchanted at the thought of remaining in middle school. These six years and several months of middle-school work, at 30 hours per week (for the most part) have taken so much of my physical and spiritual strength that I really don’t know if any other occupation would have taken as much. Especially given that my health is not especially good and is starting to wear down slowly on the school treadmill. Climbing dozens of flights of stairs a day for a man who, following a bout with pericarditis (as early as 1909), still has some pleuropericardial adhesions is no delight, and the poisoned school air is contraindicated for my lungs. But ultimately, these are issues that, while they affect me, do not poison me mentally. Worse than that, the working relationships in our middle schools are rather gloomy, and I have the impression that this is not only true of Toruń. It’d also be a pleasure to exchange the teaching profession for some other, calmer occupation, especially since the years are passing, and one might wish to study (and write) a few things. I had dreamed that once I achieved habilitation, I’d be able to get a reduction in hours; meanwhile, just at the point I was habilitated, reductions were discontinued. Dreams about changing professions are, however, only dreams. For such a change, it would be necessary to have more energy and, above all, shrewdness than I have. And if I’m writing about this, it’s just because I’m a bit surprised that what to me seems to be merely a malum necessarium [Latin: necessary evil] passes at the Lviv Board for something that I can obtain only with difficulty (and that only thanks to your gracious support).

If you go to the Board in the near future, I’d be sincerely grateful to you for taking the opportunity to graciously inform me of the Board’s intentions regarding me. I’d very much like to know how my future looks, especially since, in view of the extremely unpleasant situation in the local middle school, I would like in any case to get out of here, in any direction whatsoever. First and foremost, of course, I’d like to work in Lviv. However, if the authorities do not permit me to do so, I’ll have to relocate to some other ‒ any other ‒ big city, because I consider a longer stay, in a provincial city devoid of even the most primitive conditions for academic work and, moreover, in conditions that cause continual irritation, to be lethal.

As for Philosophical Movement, only the number of copies printed would be important to me (as far as I know, Movement prints only as many copies as it distributes). That the financial situation isn’t rosy is something that I, knowing a bit about our situation, can well imagine myself. I’m continuing to develop the article about our philosophical journals. I’ve already read six years of the post-war Philosophical Review and one year of Philosophical Quarterly. At present I’m reading the second year of Quarterly. I suppose that after about 10 days of reading I’ll be ready. Then I’ll start writing. I’d be very grateful to you for information on the number of copies of Movement printed.

The offprints of my dissertation haven’t been sent to me yet. However, I’ve made three copies from the second and third proofs, which I’ve sent to be bound and which I want to send to the Philosophical Soc. in Lviv, to the Phil. Institute, and possibly to Cracow. As soon as I receive the offprints, however, I’ll send you one without delay. I’m not sure whether offprints shouldn’t be sent to the Scientific Society. Since I’m going to receive only 10 offprints, I’d prefer not to ‒ but maybe I should?

Once again, in thanking you most cordially for your letter, I enclose expressions of profound esteem and respect

Letter to the Committee of the Library of Classics of Philosophy written 30.09.1952

Letter to the Committee of the Library of Classics of Philosophy written 18.07.1951