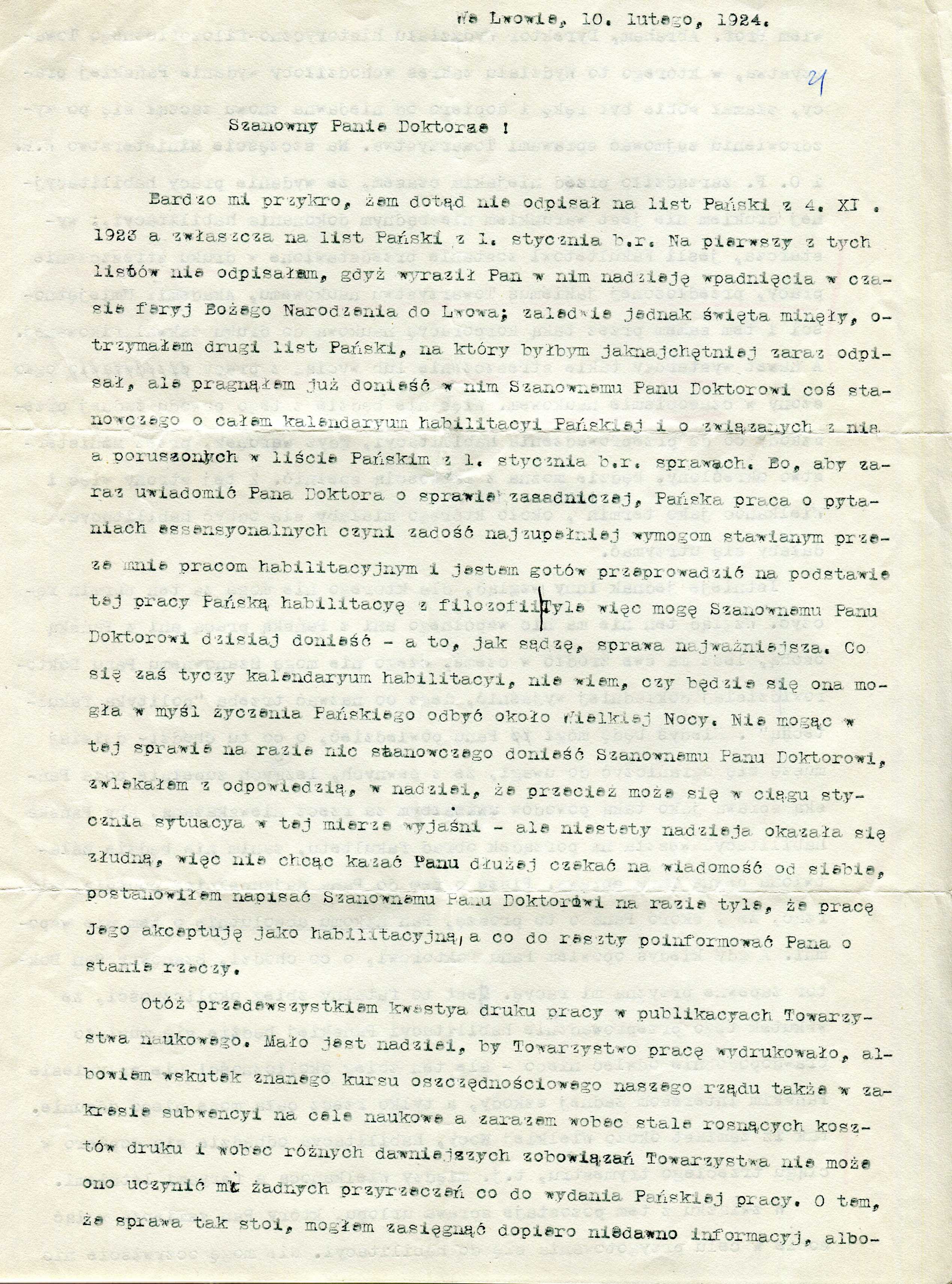 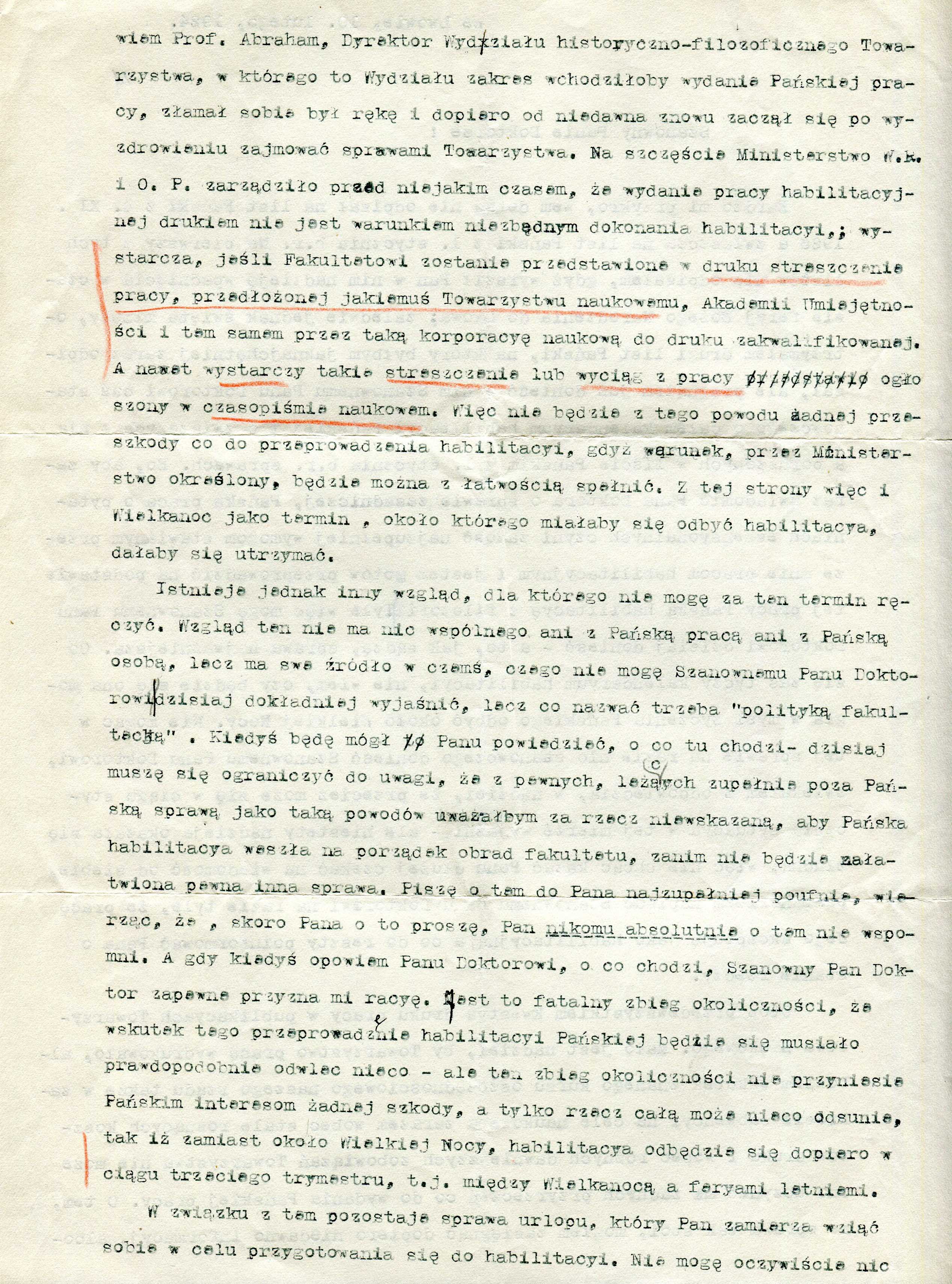 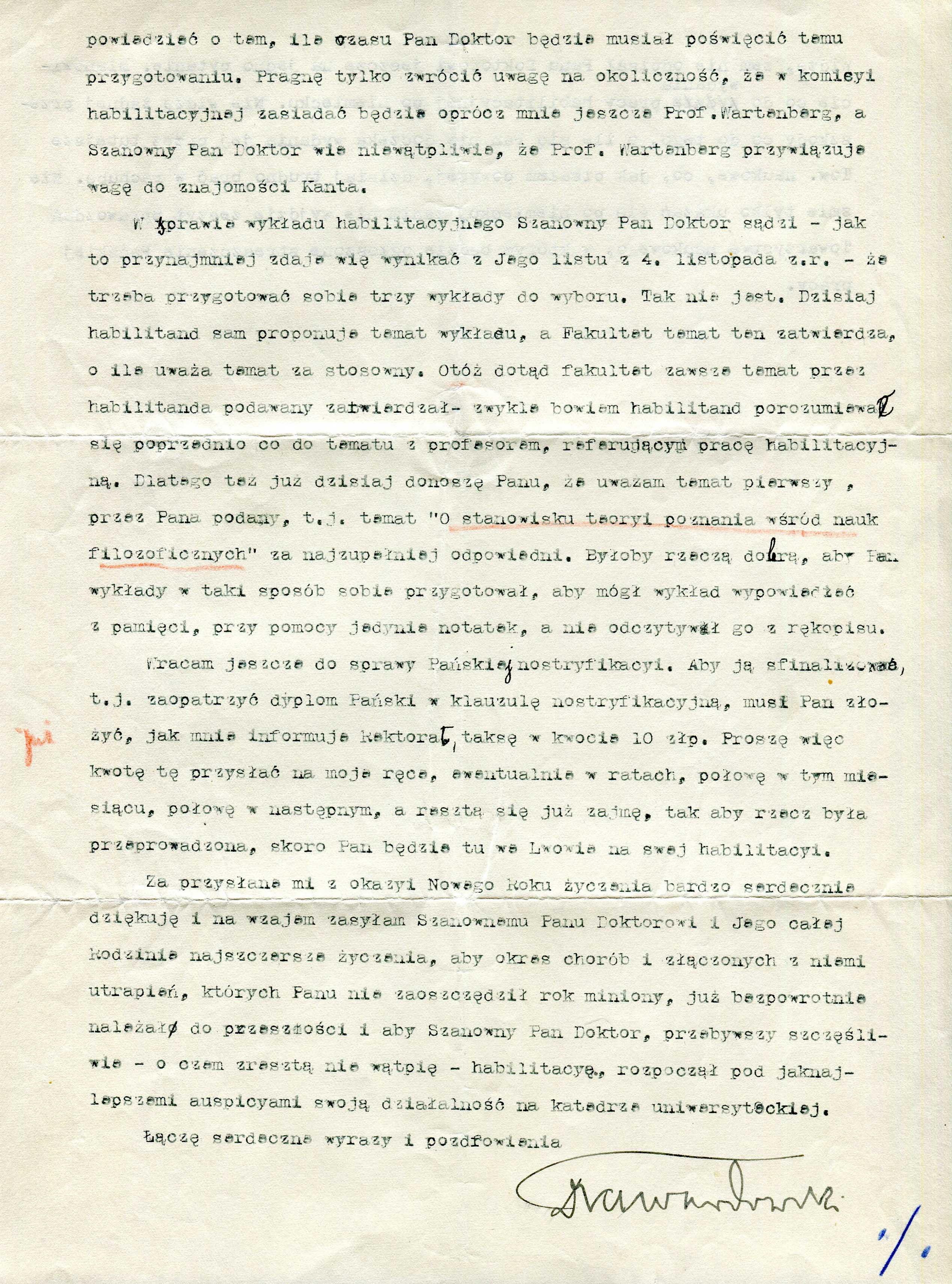 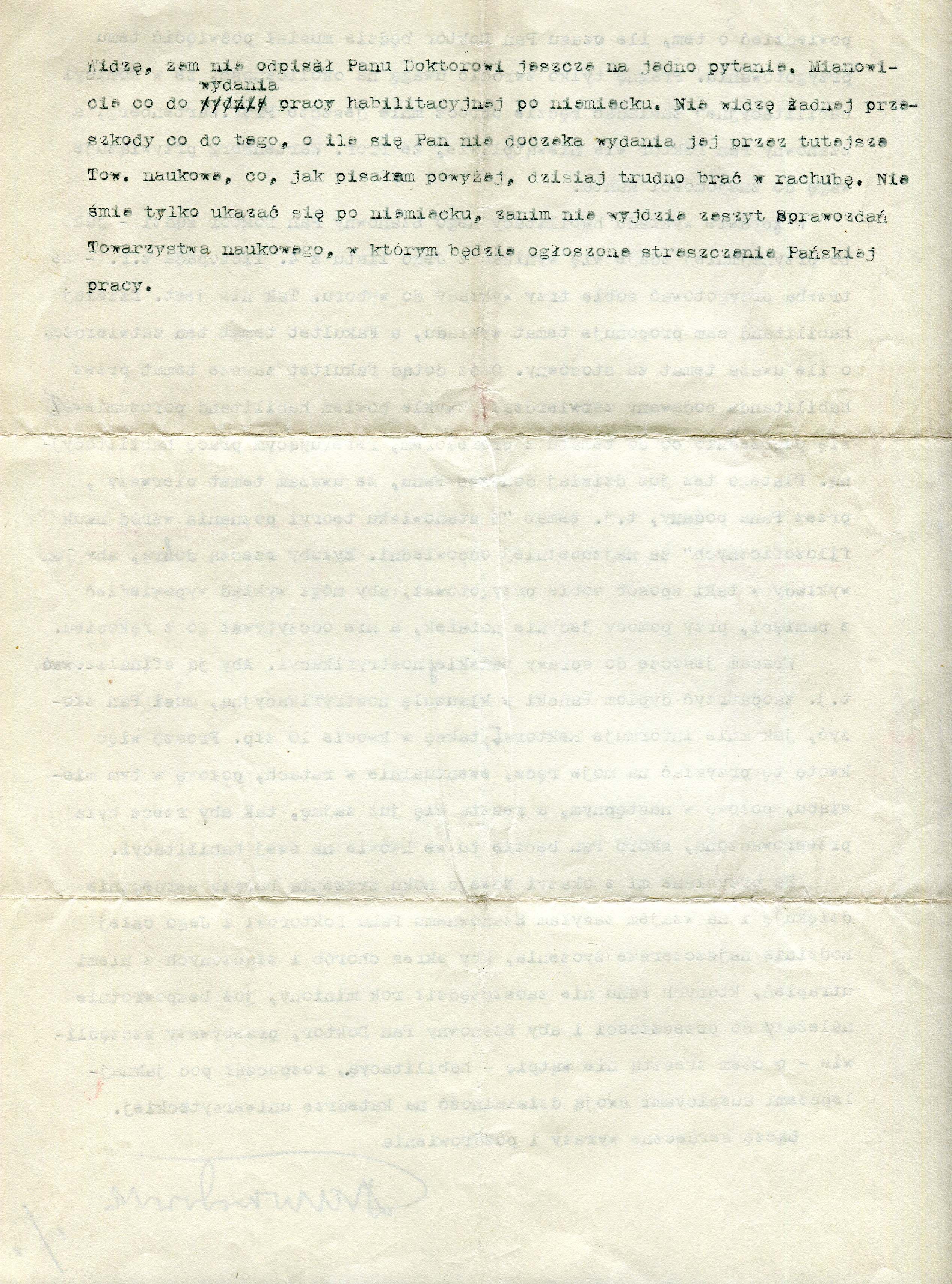 I’m very sorry for not replying to your letter of 4 November 1923 and especially to your letter of 1 January of this year. I didn’t reply to the first of these letters because in it you’d expressed the hope of stopping in Lviv at the time of the Christmas break; hardly had the holidays passed, however, when I received your second letter, to which I would have most willingly replied at once, but I wished to immediately give you some solid information about your habilitation schedule and about the matters related thereto raised in your letter of 1 January. For (to promptly inform you about the essence of the matter), your paper on essential[O1]  questions complies most fully with the requirements I’ve established for a habilitation thesis, and, based on this paper, I’m prepared to conduct your habilitation in philosophy. Of this much I can inform you today ‒ and this, I think, is the most important matter. As for the habilitation schedule, I don’t know whether it can take place around Easter in accordance with your wishes. Being unable to inform you any further in this matter, I delayed my response, hoping that perhaps during January the situation would clarify itself to some extent ‒ but unfortunately that hope proved illusory; thus, not wanting to condemn you to waiting any longer for news from me, I decided to write, for now, only that I accept your paper as a habilitation thesis, and as for the rest, to inform you about the state of affairs.

Well, first of all, the issue of printing the paper in the publications of the scientific Society. There is little hope that the Society will print the paper, because, as a result of our government’s well-known policy of austerity in the field of subsidies for scientific purposes, and, at the same time, given ever-increasing printing costs and its various previous commitments, the Society can’t promise me anything in regard to the publication of your paper. I learned that matters stood thus only recently, as Prof. Abraham[O2] , Director of the historical-philosophical Department of the Society, within whose purview your paper would fall, broke his arm and only recently, following his recuperation, began once again to concern himself with the Society’s affairs. Fortunately, the Ministry of Religious Denominations and Public Education decreed some time ago that publication of a habilitation thesis is not a necessary condition for habilitation; it is sufficient that a summary of the paper is presented to the Faculty in print, having been submitted to some scientific Society, Academy of Learning, and thus certified by such an academic body for printing. And even publication of such a summary or extract from the paper in an academic journal is sufficient. Thus there is no obstacle to habilitation in this regard, since the condition set by the Ministry can be easily fulfilled. In this respect, therefore, Easter could be maintained as the approximate date of the habilitation process.

However, there is another consideration due to which I can’t vouch for this date, which has nothing to do with either your paper or you personally, but has its source in something I can’t explain to you precisely today, but what has to be called ‘faculty politics’. One day I’ll be able to tell you what this is all about; today I have to limit myself to the observation that for certain reasons, completely unconnected with your case as such, I’d consider it inadvisable for your habilitation to be placed on the faculty agenda before a certain other matter is settled. I’m writing this to you in complete confidence, in the belief that, since I so request, you’ll mention it to absolutely no one. And when, someday, I tell you what it’s all about, you’ll probably agree that I was right. It’s a terrible coincidence that as a result your habilitation will probably have to be postponed to some extent ‒ but this coincidence will not damage your interests, and will only push the whole thing back a bit, so that instead of around Easter, the habilitation will take place only during the third trimester, i.e. between Easter and the summer holiday.

In this connection, there remains the question of the leave which you intend to take in order to prepare for habilitation. Of course, I can’t say anything about how much time you’ll need to devote to this preparation. I just wish to draw attention to the fact that, in addition to myself, the habilitation committee includes Prof. Wartenberg[O3] , who, as you doubtless are aware, attaches importance to acquaintance with Kant.

As regards the matter of the habilitation lecture, you believe – as seems to follow, at least, from your letter of 4 November of last year – that it’s necessary to prepare a selection of three lectures. This is not true. Today the candidate himself proposes the topic of the lecture, and the Faculty approves it, provided it considers the topic appropriate. So far the faculty has always approved the topic proposed by the candidate – since usually the candidate has spoken beforehand about the topic with the professor reading the habilitation thesis. Therefore I’m informing you today that I consider the first topic you mentioned, i.e. the topic ‘On the position of the theory of cognition among philosophical sciences’ as perfectly suitable. It would be a good thing for you to prepare yourself to deliver the lecture from memory, using only notes, rather than reading it from the manuscript.

To return to the matter of your nostrification: in order to finalise it, i.e. to furnish your diploma with the nostrification clause, the Rector informs me that you have to submit a fee of 10 zlotys. So please send this amount to me personally ‒ in instalments, if desired, half this month, half next ‒ and I’ll see to the rest, so that the thing will be taken care of, since you’re going to be here in Lviv for your habilitation.

I thank you cordially for the New Year’s wishes you sent and in return, I send you and your whole family most sincere wishes that the period of sickness and associated afflictions which beset you over the past year are now irrevocably part of the past, and that, having successfully completed your habilitation – about which I have no doubt ‒ you’ll commence your activities at a university faculty under the most favourable auspices.

I enclose cordial regards and greetings

I see that I still haven’t responded to one of your questions, namely, as to publishing your habilitation thesis in German. I don’t see any obstacles, as long as you don’t wait to be published by the local scientific Soc., which, as I wrote above, is difficult to count on these days. Don’t risk publishing solely in German prior to the publication of the issue of the Reports of the scientific Society containing the summary of your paper.