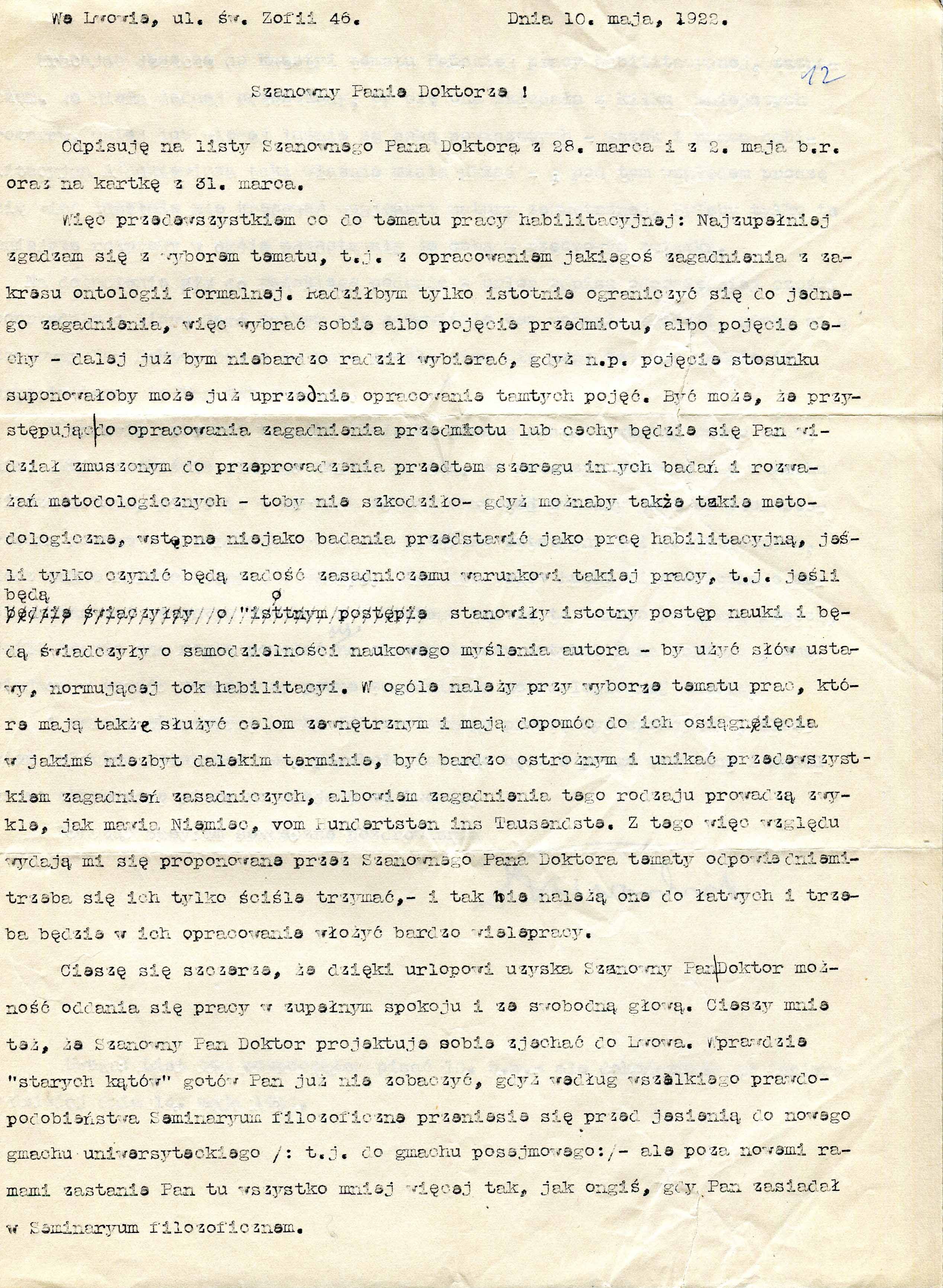 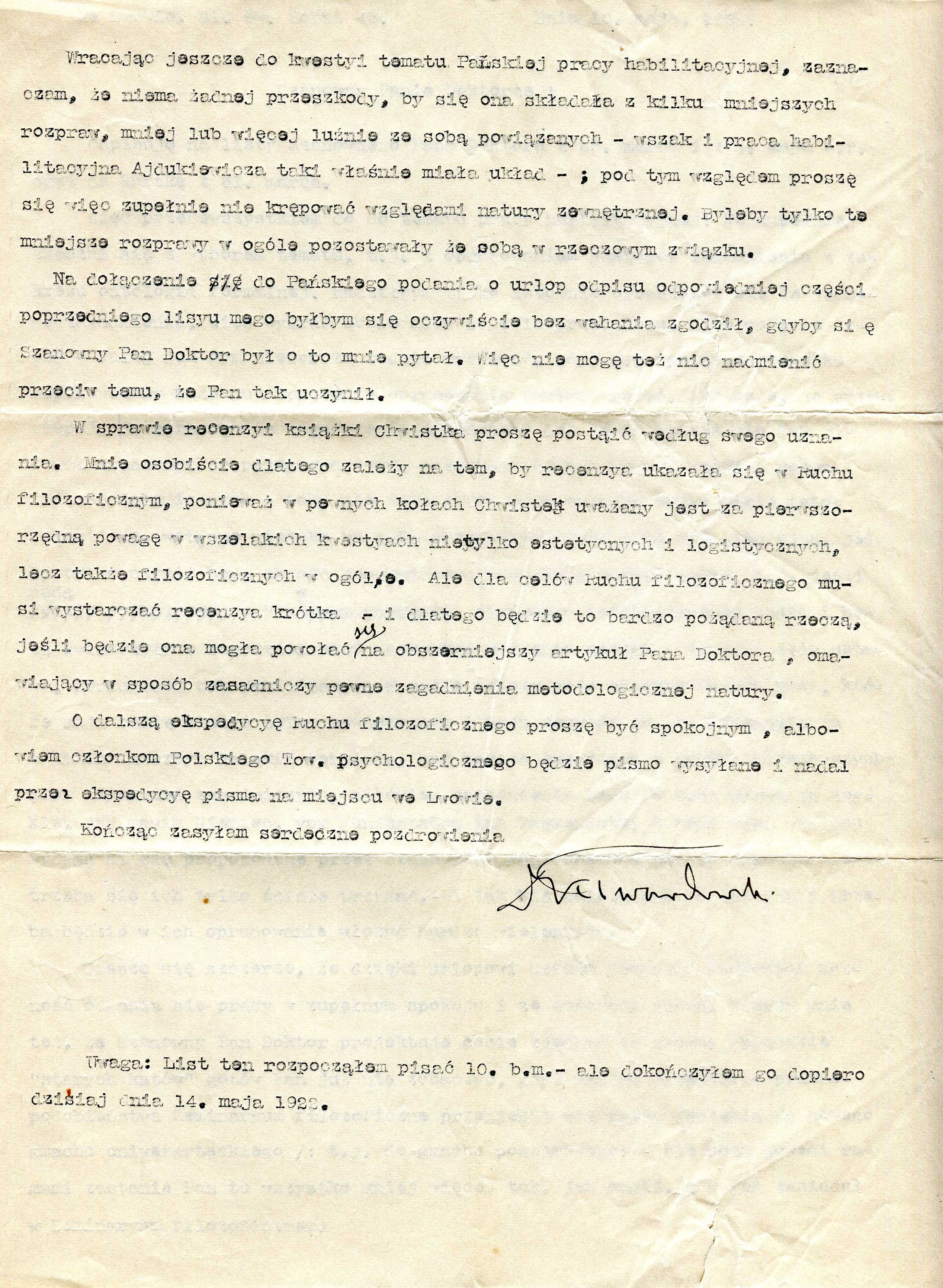 I’m responding to your letters of 28 March and 2 May of this year, as well as to your card of 31 March.

Thus, first of all, as to the subject of the habilitation thesis: I completely agree with the choice of topic, i.e. with the elaboration of some issue in the field of formal ontology. I would advise you only to essentially limit yourself to one issue, and thus to choose either the concept of the subject or the concept of the attribute – I wouldn’t advise you to choose any further, since e.g. the concept of a relationship may have already superseded the prior elaboration of these concepts. Perhaps, in proceeding to develop the issue of the subject or its attributes, you’ll find yourself forced to first carry out a number of other investigations and methodological considerations ‒ which wouldn’t hurt – since it would be possible to present several methodological preliminary studies as a habilitation thesis, as long as they satisfy the basic condition for such a paper, i.e. if they constitute a significant scientific advance and testify to the independence of the author’s scientific thinking ‒ to use the words of the law regulating the habilitation process. In general, when choosing the topics of papers which are also intended for external purposes and are supposed to help in their fulfilment within a not very distant period of time, one should be very careful and avoid above all the essential issues, for issues of that kind usually lead, as the German says: vom Hundertsten ins Tausendste [from the hundredth to the thousandth]. Thus, it seems to me that the topics you suggest are appropriate ‒ you just have to stick to them strictly – and even so they’re not among the easiest, and you’ll have to put in a lot of work to develop them.

I’m glad that thanks to the leave of absence you’re gaining the opportunity to devote yourself to work in complete peace and with an easy mind. I’m also glad that you’re planning to come down to Lviv. Indeed, you’re not likely to see the ‘old haunts’ any more, since in all probability the philosophical Seminarium will be re-located before the autumn to the new university building (i.e. to the old Sejm building) but apart from the new framework, you’ll find everything here more or less as it was when you took your seat in the philosophical Seminarium.

Returning to the topic of your habilitation thesis, I note that there are no obstacles to its being made up of several shorter, more or less loosely related dissertations – after all, Ajdukiewicz’s habilitation thesis was arranged in just that way ‒ in this respect, please, don’t let yourself be inhibited by external considerations, provided only that these shorter dissertations maintain a material relationship with one another.

As an attachment to your application for a leave of absence I would, of course, have agreed without hesitation to copying the relevant part of my previous letter, if you were to ask me about it. So I can’t say anything against your having done it.

Regarding the review of Chwistek’s book, please act according to your discretion. For me personally, it’s important for a review to appear in Philosophical Movement, since in some circles Chwistek is considered as a high-ranking authority not only in aesthetic and logical, but also generally in philosophical matters. But for the purposes of Philosophical Movement, a short review must suffice – and thus it’d be very desirable for it to refer to your more comprehensive article discussing, in a fundamental manner, certain issues of a methodological character.

As for the shipment of Philosophical Movement in the future, please don’t worry, since the publication will be sent to members of the Polish Psychological Society and will still be sent to the address in Lviv.

In closing, I send cordial greetings

Lecture of Roman Ingarden on the meeting of Lviv Scientific Society 15.06.1939

Minutes of the meeting of the Committee of the Library of Classics of Philosophy written 19.01.1953