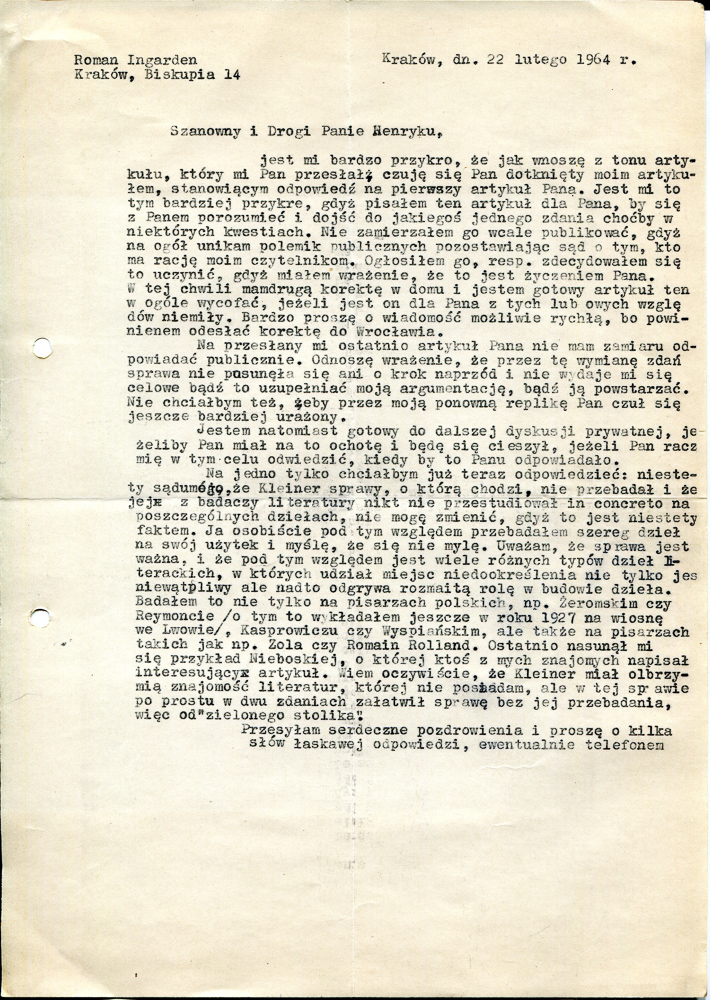 c                  c            I greatly regret that, as I take from the tone of the article that you sent me, you feel wounded by my article, which constitutes a response to your first article. This is all the more regrettable for me because I wrote this article for you, in order to reach an understanding with you and come to a single opinion of some kind, at least on several issues. I had no intention of publishing it at all, since generally I avoid public polemics, leaving the judgment as to who is right to my readers. I published it, or decided to do so, because I had the impression that this was your wish. At the moment I have the second set of proofs at home and am prepared to withdraw this article altogether, if it displeases you for these or other reasons. Please send me a message as soon as possible, because I’m supposed to send the proofs to Wrocław.
c            I have no intention of responding publicly to the article of yours that was recently sent to me. I have the impression that the issue hasn’t moved even one step forward through this exchange of opinions, and it doesn’t seem expedient to me either to supplement or to repeat my arguments. Nor would I wish you to feel still more wounded by my reiterated response.
c            However, I’m prepared for further private discussion, if you desire it, and would be happy if you’d consent to visit me for this purpose when it suits you.
c            I would like to respond to only one thing now: unfortunately, my judgment that Kleiner did not study the matter in question, and that, among researchers of the literature, no one has studied particular works in concreto [Latin: concretely], is something that I can’t change, since it is unfortunately a fact. In this respect, I personally examined a number of works for my own use, and I don’t believe I’m mistaken. I regard the matter as important, and that in this respect there are many different types of literary works in which the share of places of indeterminacy is not only indubitable but also plays various roles in the construction of the work. I’ve studied this in the cases not only of Polish writers, e.g. Żeromski or Reymont (on whom I lectured as early as spring 1927 in Lviv), Kasprowicz or Wyspiański, but also of writers such as Zola or Romain Rolland. Recently, I came across the example of Nieboska [evidently Nie-Boska Komedia (Undivine comedy), by Zygmunt Krasiński], about which one of my acquaintances has written an interesting article. I know, of course, that Kleiner possessed a great knowledge of literature, which I lack, but in this matter, he simply settled the matter in two sentences without examining it, i.e. from the ‘umpire’s chair’.

I send cordial greetings and ask for a few words by way of gracious reply, or possibly a phone call