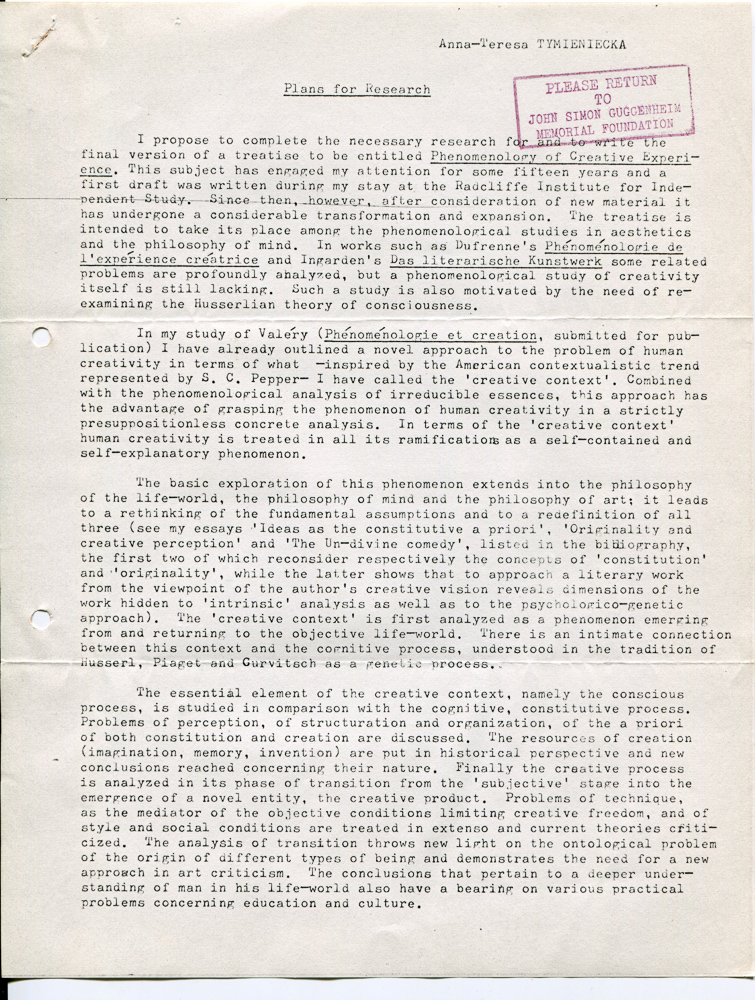 v       I propose to complete the necessary research for and to write the final version of a treatise to be entitled Phenomenology of Creative Experience. This subject has engaged my attention for some fifteen years and a first draft was written during my stay at the Radcliff Institute for Independent Study. Since then, however, after consideration of new materia it has undergone a considerable transformation and expansion. The treatise is intended to take its place among the phenomenological studies in aesthetics and the philosophy of mind. In works such as Dufrenne’s Phénoménologie de l’expérience créatrice and Ingarden’s Das literarische Kunstwerk some related problems are profoundly analyzed, but a phenomenological study of creativity itself is still lacking. Such a study is also motivated by the need of reexamining the Husserlian theory of consciousness.

v       In my study of Valéry (Phénoménologie et creation, submitted for publication) I have already outlined a novel approach to the problem of human crativity in terms of what –inspired by the American contextualistic trend represented by S. C. Pepper- I have called the ‘creative context’. Combined with the phenomenological analysis of irreducible essences, this approach has the advantage of grasping the phenomenon of human creativity in a strictly presupposintionless concret analysis. In terms of the ‘creative context’ human creativity is treated in all its ramifications as a self-contained and self-explanatory phenomenon.

v       The basic exploration of this phenomenon extends into the philosophy of the life-world, the philosophy of mind and the philosophy of art.; it leads to a rethinking of the fundamental assumptions and to a redefinition of all three (see my essays ‘Ideas as the constitutive a priori’, ‘Originality and creative perception’ and ‘The Un-divine comedy’, listed in the biography, the first two of which consider respectively the concepts of ‘constitution’ and ‘originality’, while the letter shows that to approach a literary work from the viewpoint of the author’s creative vision reveals dimensions of the work hidden to ‘intrinsic’ analysis as well as to the psychologico-genetic approach). The ‘creative context’ is first analyzed as a phenomenon emerging from and returning to the objective life-world. There is an intimate connection between this context and the cognitive proces, understood in the tradition of Husserl, Piaget and Gurvitsch as a genetic proces.

v       The essential element of the creative context, namely the conscious process, is studied in comparison with the cognitive, constitutive process. Problems of perception, of structuration and organization, of the a priori of both constitution and creation are discussed. The resources of creation (imagination, memory, invention) are put in historical perspective and new conclusions reached concerning their nature. Finally the creative process is analyzed in its phase of transition from the ‘subjective’ stage into the emergance of a novel entity, the creative product. Problems of technique, style and social conditions are treated in extenso and current theories criticized. The analysis of transition throws new light on the ontological problem of the origin of different types of being and demonstrates the need for a new approach in art criticism. The conclusions that pertain to a deeper understanding of man in his life-world also have a bearing on various practical problem concerning education and culture.