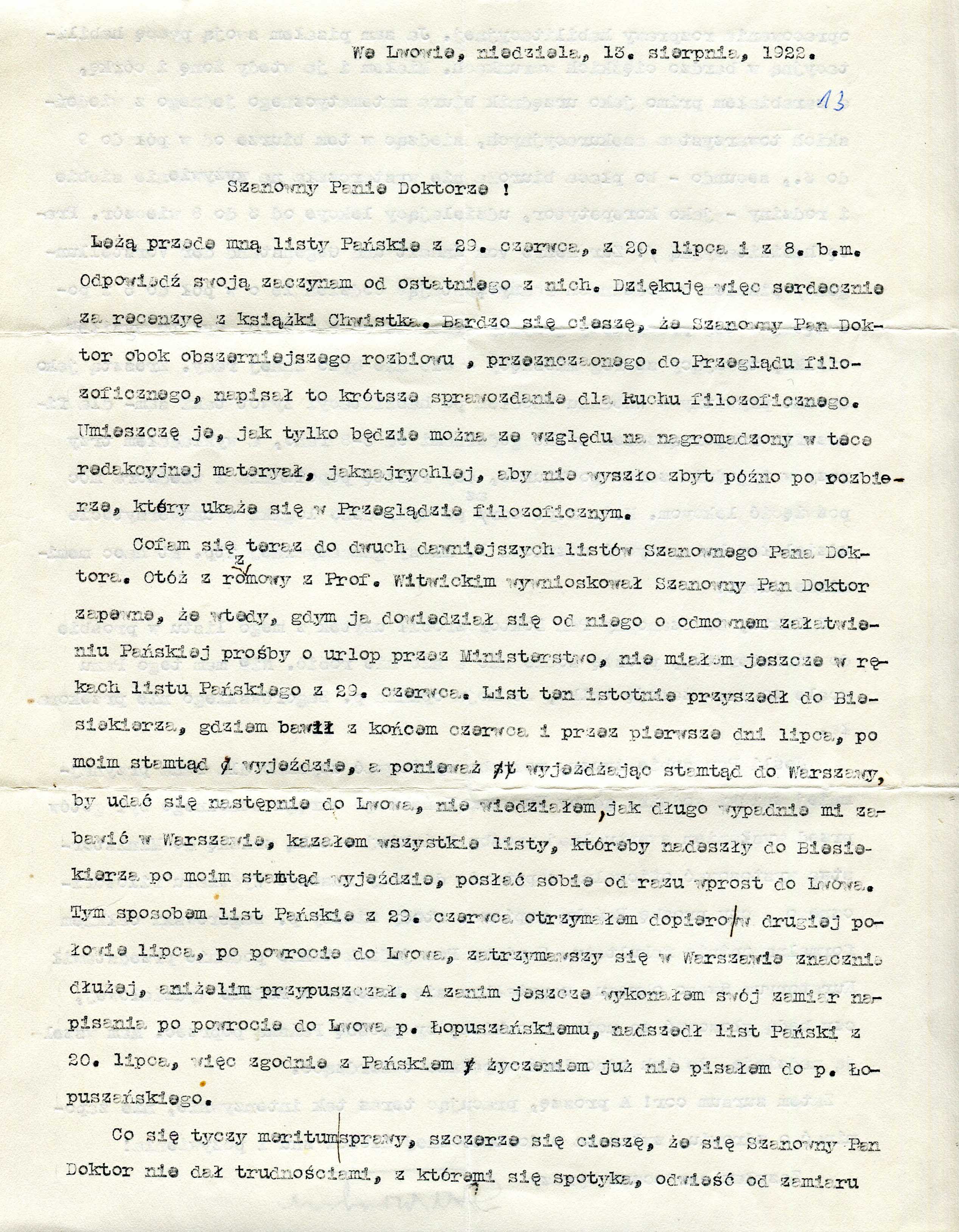 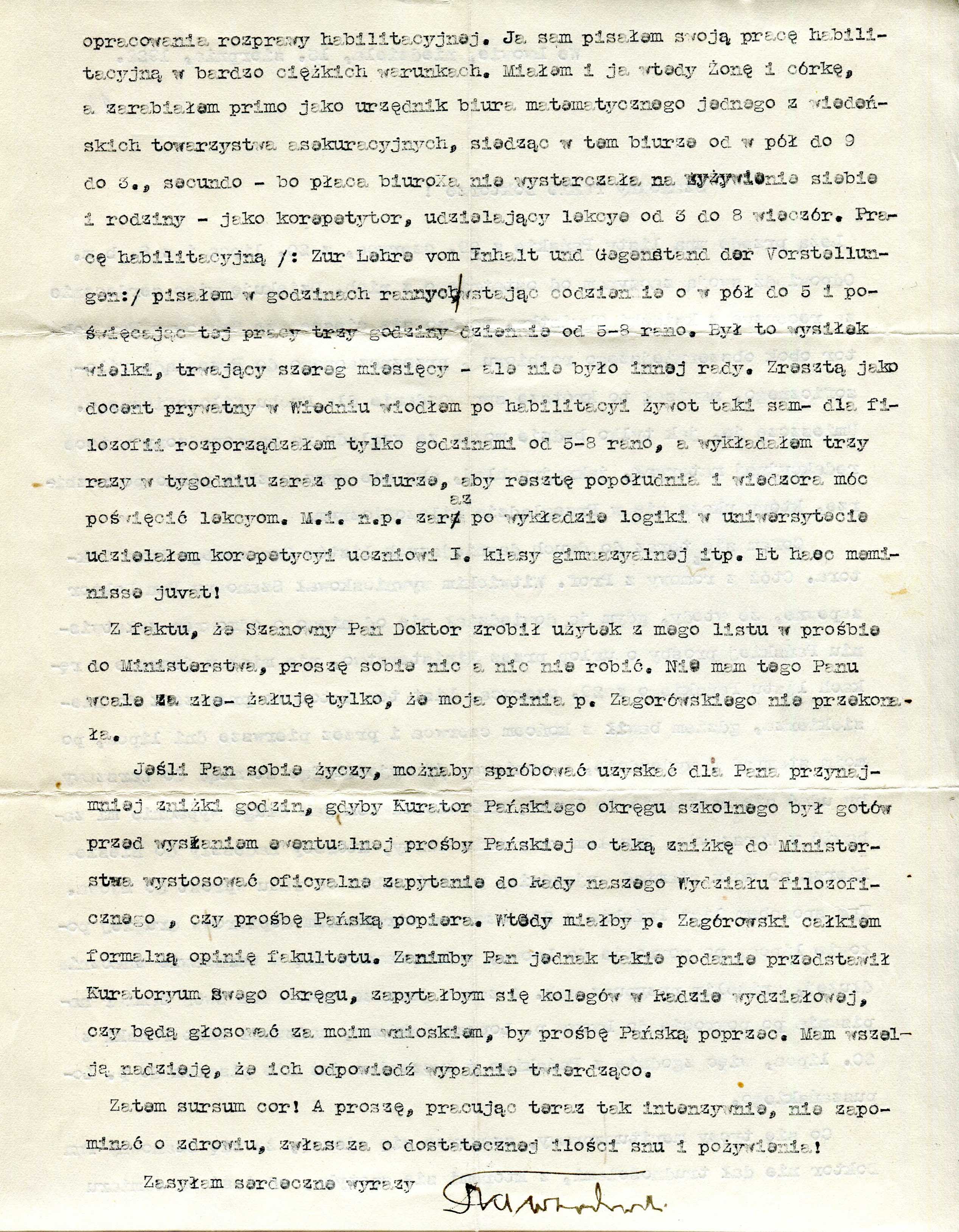 I have before me your letters of 29 June, 20 July, and the 8th of this month. I’ll start my response with the latest of them. Accordingly, I cordially thank you for the review of Chwistek’s book. I’m very glad that, along with the more extensive analysis destined for Philosophical Review, you’ve written a shorter report for Philosophical Movement. I’ll place it as soon as I can with reference to the material accumulated in the editorial file ‒ as soon as possible, so that it won’t come out too long after the analysis which will appear in Philosophical Review.

Now I’ll go back to your two earlier letters. Well, from your conversation with Prof. Witwicki, you probably concluded that at the time I learned from him about the Ministry’s refusal to honour your request for a leave of absence, your letter of 29 June hadn’t reached me yet. Indeed, this letter arrived in Biesiekierz (where I’d been enjoying myself at the end of June and for the first few days of July) after my departure, and because, while on my way from there to Warsaw in order to proceed to Lviv, I didn’t know how long I’d be able to enjoy myself in Warsaw, I ordered all letters arriving in Biesiekierz after my departure to be sent to me directly in Lviv. Thus I didn’t receive your letter of 29 June until the second half of July, following my return to Lviv after having stayed in Warsaw for much longer than I expected. And before I had carried out my intention to write to Mr Łopuszański upon returning to Lviv, your letter of 20 July arrived; thus, in accordance with your wishes, I didn’t write to him.

As for the merits of the situation, I’m sincerely glad that you haven’t permitted the difficulties which you’ve encountered to dissuade you from your intention to work on your habilitation dissertation. I myself wrote my habilitation thesis in very difficult conditions. I had a wife and a daughter then, and earned my living, primo, as a clerk in the mathematics office of one of Vienna’s insurance companies, sitting in that office from half eight to three; secundo, because the pay at this office was not enough to feed myself and the family, as a tutor, giving lessons from 3 to 8 in the evening. I wrote my habilitation thesis, Zur Lehre vom Inhalt und Gegenstand der Vorstellungen [On the Content and Object of Presentations], in the morning hours, getting up every day at half four and devoting three hours a day to this paper, from 5 to 8 in the morning. It was an enormous effort, lasting several months, but there was no other way. Besides, as a private docent in Vienna, I led the same life after habilitation: for philosophy, I only had the hours 5‒8 in the morning, and I lectured three times a week right after the office job, so that I could devote the rest of the afternoon and evening to lessons, e.g., immediately after lecturing on logic at the university, I tutored a student in the first class of middle school, etc. Et haec meminisse juvat! [Latin: And pleasant it is to remember this]

As for the use you made of my letter in a request to the Ministry, there’s no need to worry. I don’t hold anything against you in this regard – I’m only sorry that my opinion failed to convince Mr Zagórowski.

If you wish, it might be possible to try to obtain at least a reduction in hours for you, if the Inspector of your school district were prepared, prior to sending your request for such a discount to the Ministry, to address an official inquiry to the Council of our Philosophy Department as to whether it supports your request. Then, Mr Zagórowski would have the completely formal opinion of the faculty. But before you present such an application to the Board of your district, I’ll ask my colleagues on the faculty council whether they’d vote in favour of my proposal to support your request. I hope their answers will be in the affirmative.