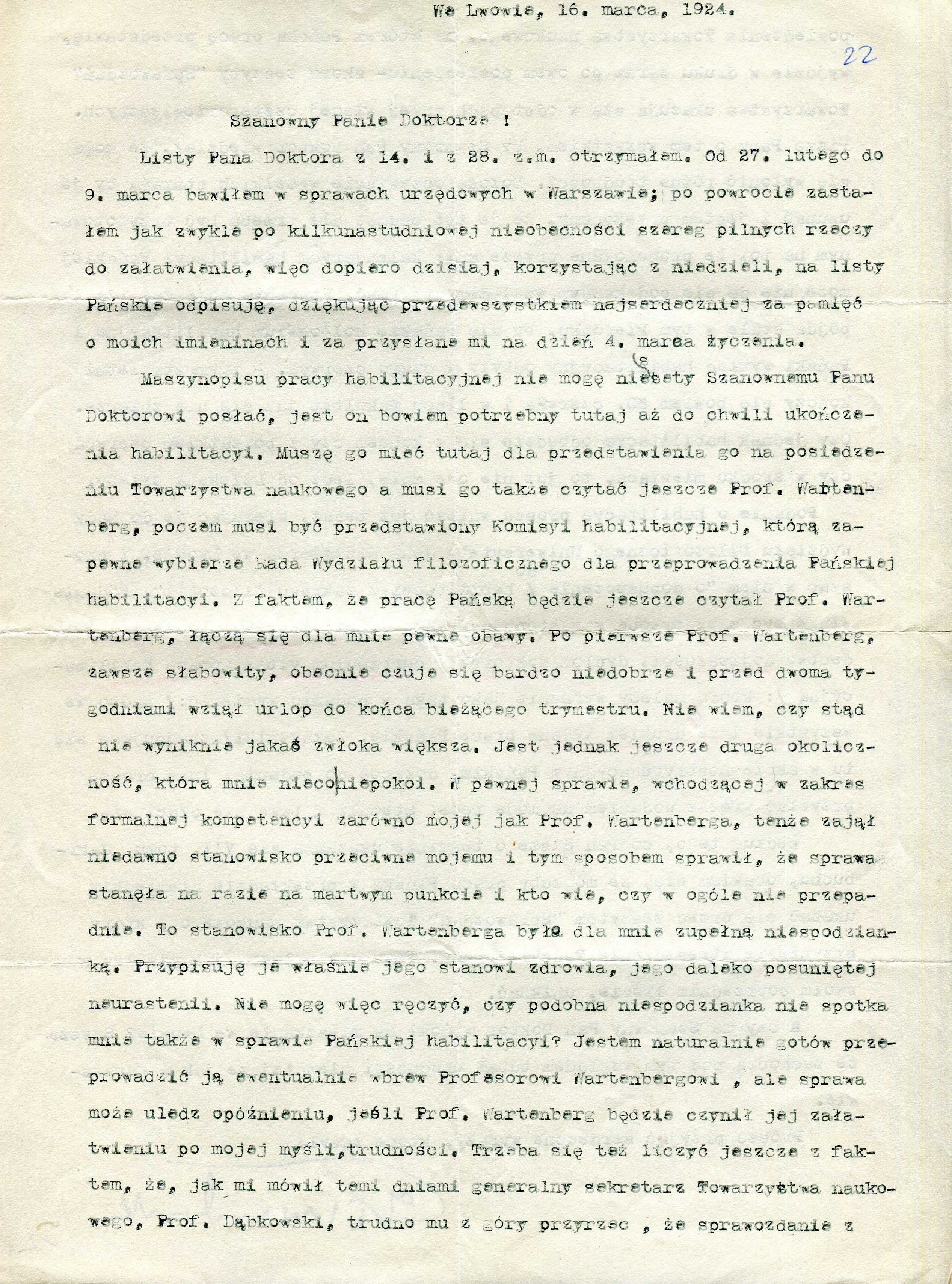 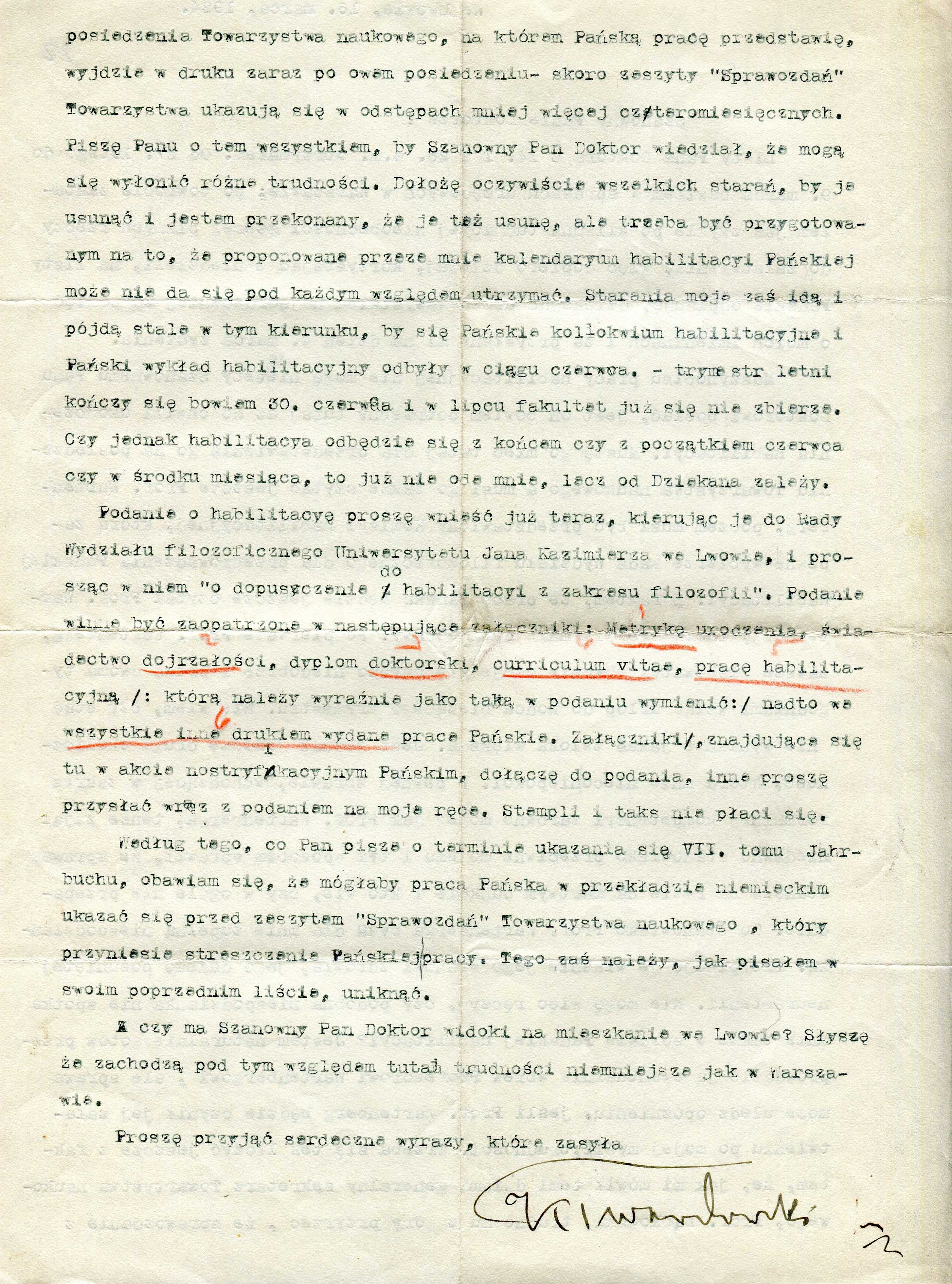 I’ve received your letters of the 14th and 28th of last month. From 27 February to 9 March I was amusing myself with official matters in Warsaw; upon my return I found, as usual after an absence of several days, a number of urgent things to see to; thus it’s only today, taking advantage of Sunday, that I’m replying to your letters, first of all thanking you most cordially for remembering my name-day and for the wishes you sent for 4 March.

Unfortunately, I can’t send you the typed manuscript of your habilitation thesis, because it’s needed here until the conclusion of the habilitation process. I must have it here in order to present it at a meeting of the Scientific Society, and it must also be read by Prof. Wartenberg and subsequently presented to the habilitation Commission, which will probably choose the Council of the Department of Philosophy to conduct your habilitation. For me, certain misgivings are connected with the fact that your paper is to be read by Prof. Wartenberg. First of all, Prof. Wartenberg, always frail, is feeling very unwell at present and two weeks ago took a leave of absence until the end of the current trimester. I don’t know whether that is going to result in a longer delay of some kind. There is, however, still another circumstance which disturbs me somewhat. On a certain matter that falls within the scope of the formal competence of both myself and Prof. Wartenberg, he recently took a position opposed to mine, and thus the issue was left at a standstill ‒ and who knows whether it’ll fall through completely? This position of Prof. Wartenberg’s came as a complete surprise to me. I attribute it to the state of his health, his advanced neurasthenia. Thus I can’t be sure I won’t be similarly surprised in the matter of your habilitation. I am naturally willing to conduct it, even, possibly, in opposition to Prof. Wartenberg, but the matter may be delayed if he makes it difficult (as I suspect) to arrange. It’s also necessary to reckon with the fact that ‒ as Prof. Dąbkowski[O1] , the general secretary of the scientific Society, told me recently ‒ it’s difficult for him to promise in advance that the report from the scientific Society meeting at which I’ll present your paper will be printed immediately following that meeting – since issues of the Society’s Reports appear at (more or less) four-month intervals. I’m writing to you all about this, so that you’ll know that various difficulties may arise. Of course, I’ll make every effort to overcome them, and I’m convinced that I’ll succeed, but it’s necessary to be prepared, as it may not be possible to adhere to the schedule I’ve proposed for your habilitation in every respect. My efforts, then, are proceeding and will proceed such that your habilitation colloquium and lecture will take place in June ‒ the summer trimester ends on 30 June and as of July the faculty will meet no longer. However, whether habilitation takes place at the end or beginning of June or in the middle of the month no longer depends on me, but on the Dean.

Please submit your application for habilitation at once, addressing it to the Council of the Faculty of philosophy at Jan Kazimierz University in Lviv, and asking therein ‘for admission to habilitation in philosophy’. The application should be accompanied by the following attachments: 1. birth certificate, 2. secondary school-leaving certificate, 3. doctoral diploma, 4. curriculum vitae, 5. habilitation thesis (which should be clearly identified as such in the application), and moreover, 6. all of your other published papers. I’ll attach the documents that are here in your nostrification file to the application; please send the others to me personally, along with the application. The stamps and fees need not be paid.

According to what you’ve written concerning the date of the appearance of Volume VII of [Philosophical] Yearbook, I’m afraid that the German translation of your paper may appear before the issue of the scientific Society’s Reports containing the summary of your paper. This, as I wrote in my previous letter, should be avoided.

Do you have any prospects regarding a flat in Lviv? I hear that there are difficulties here in this respect, no less than in Warsaw.