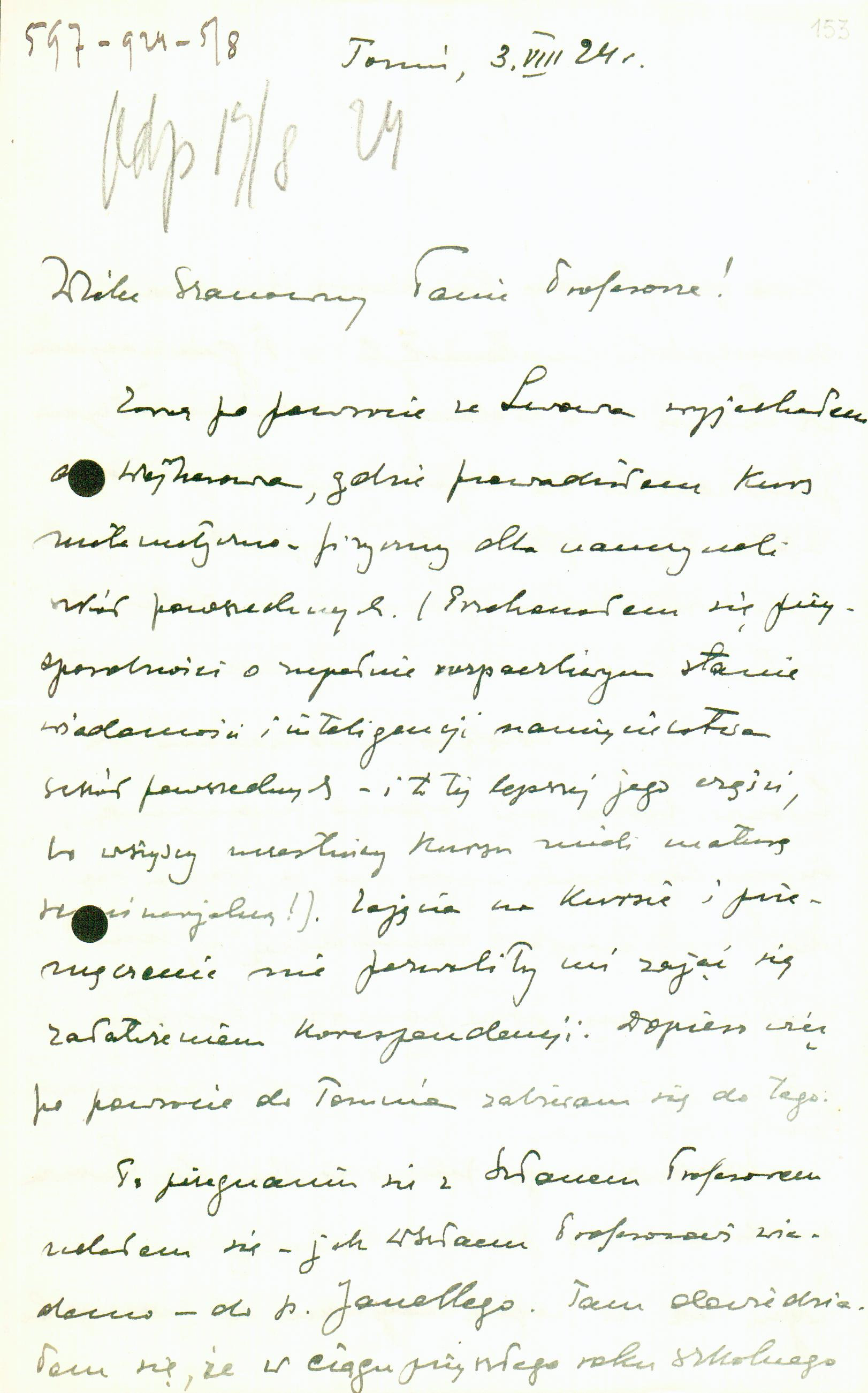 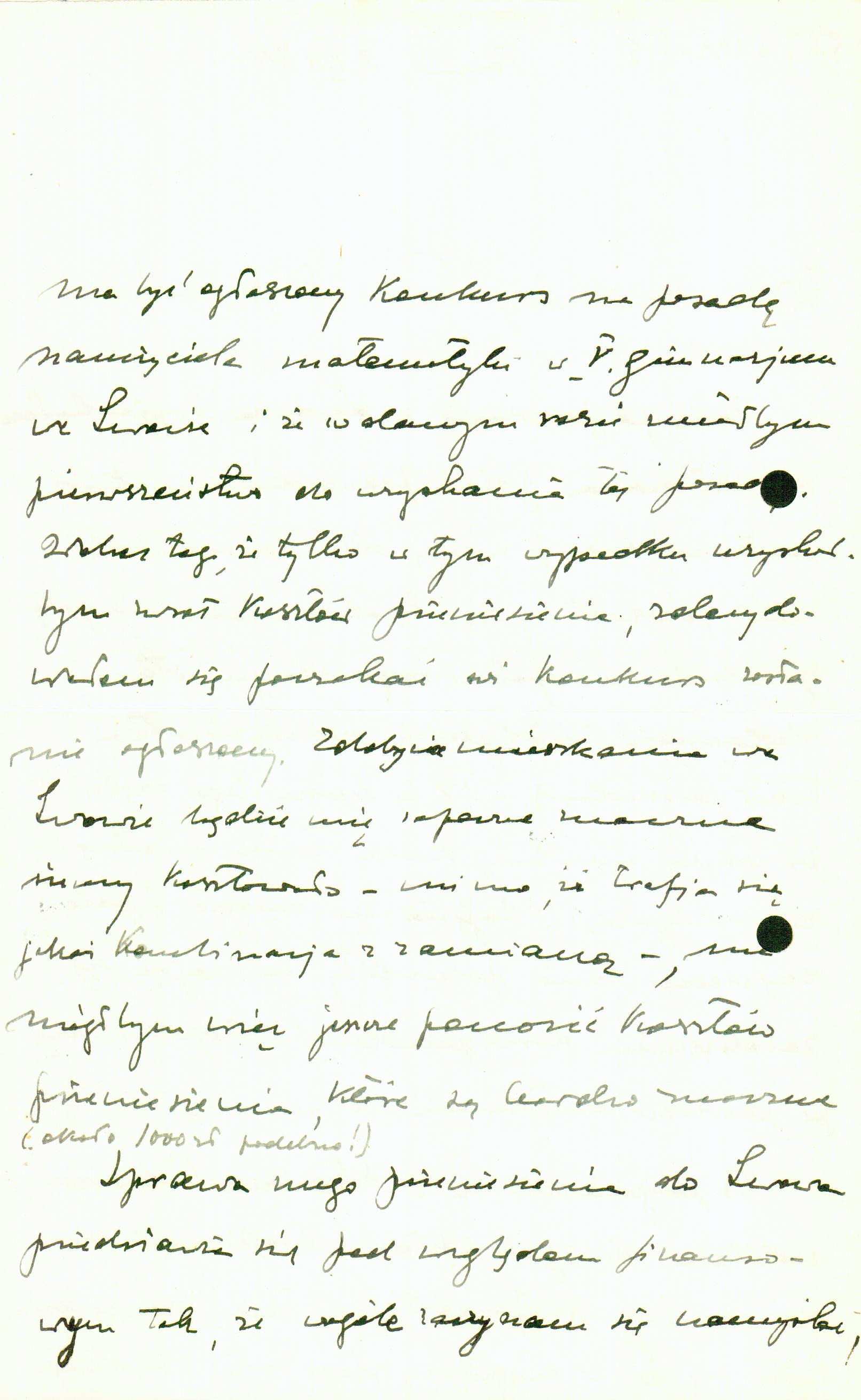 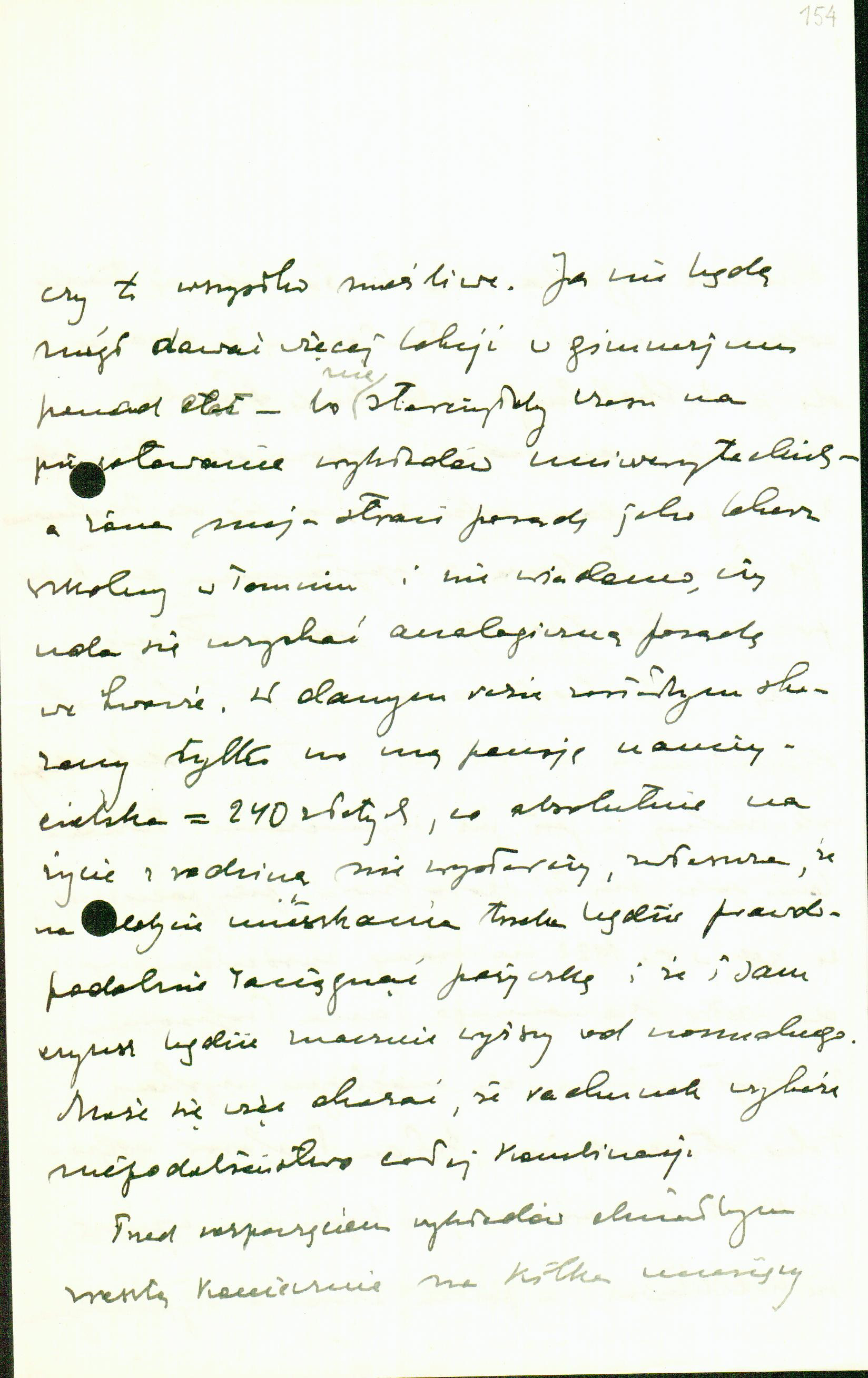 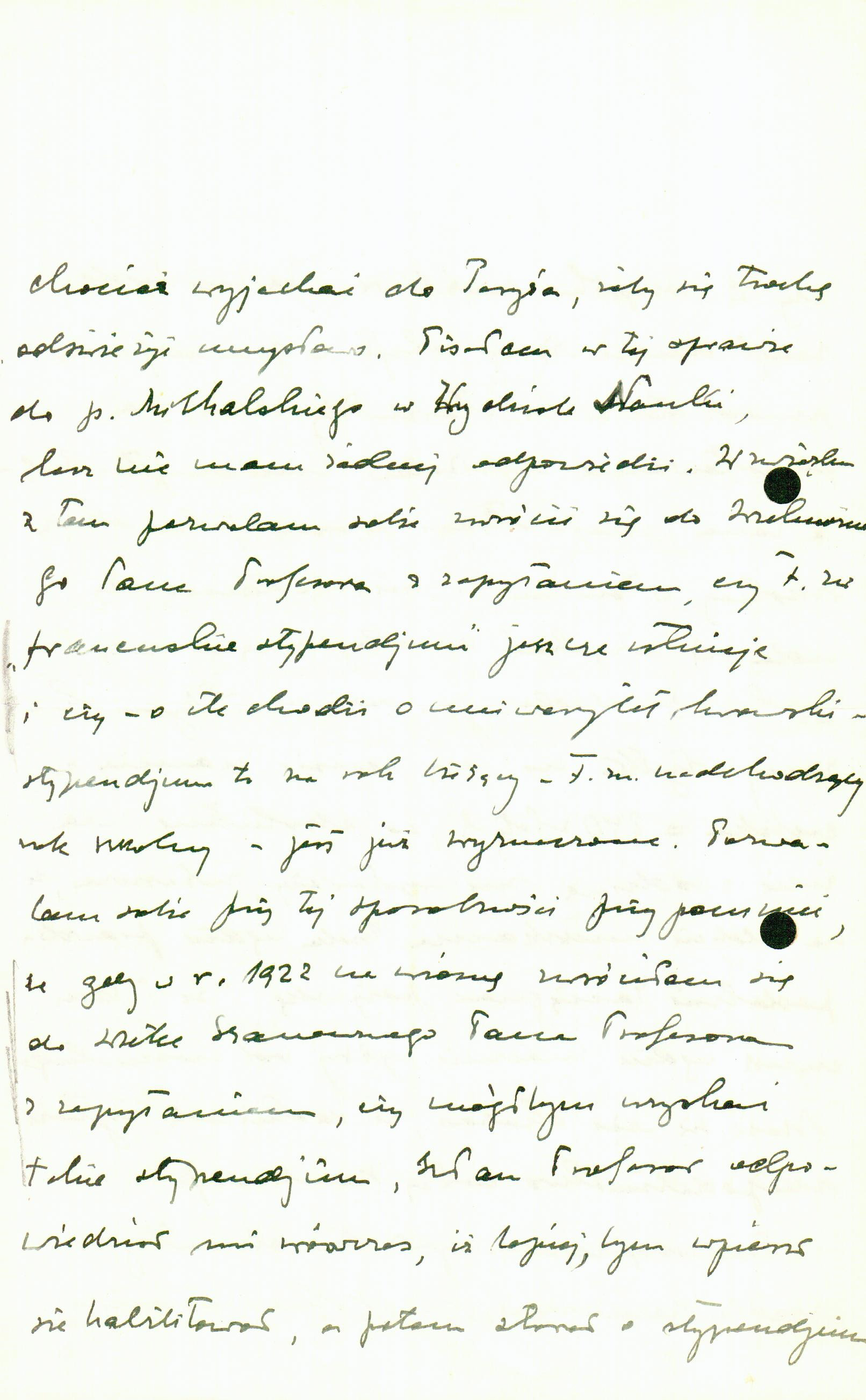 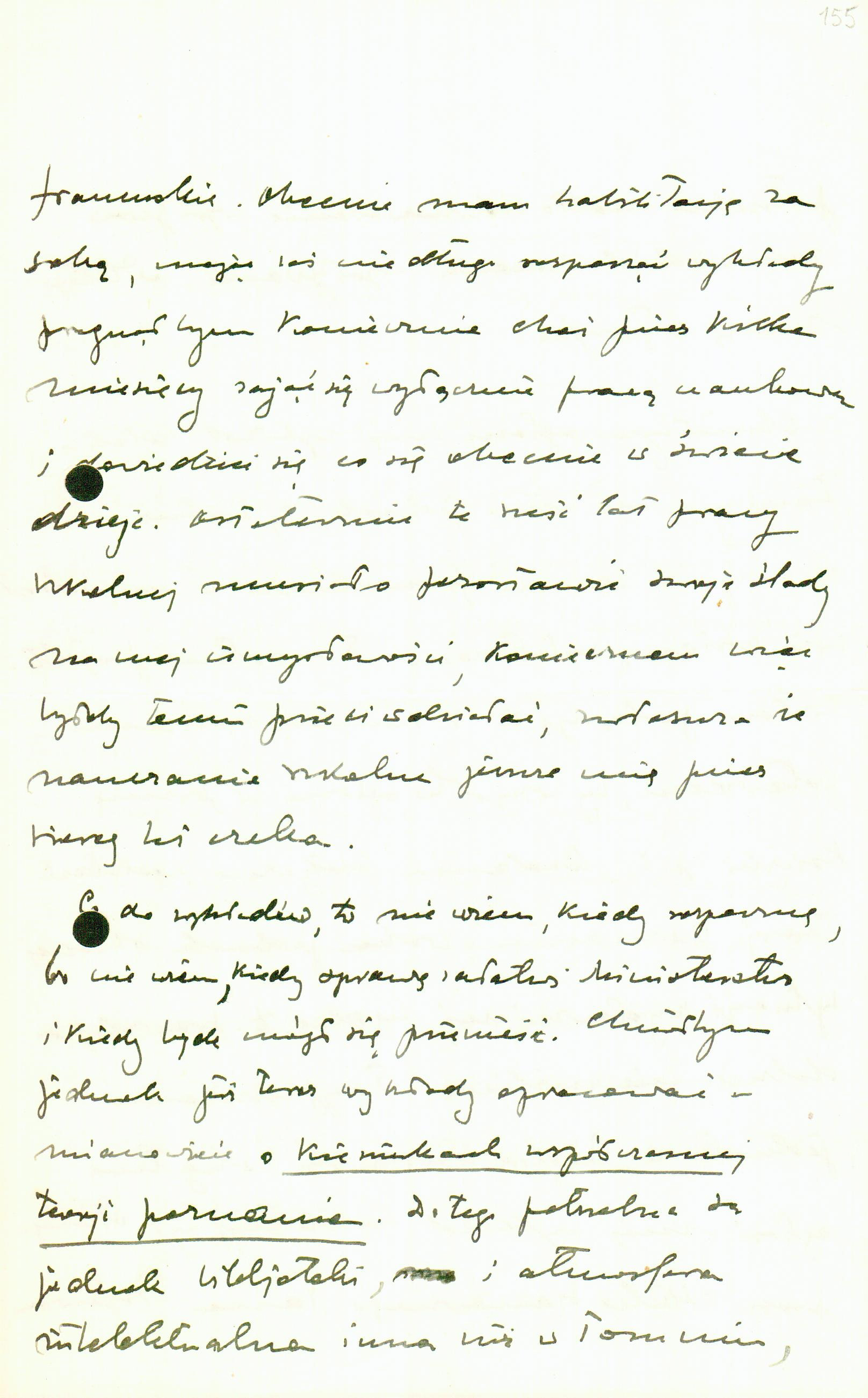 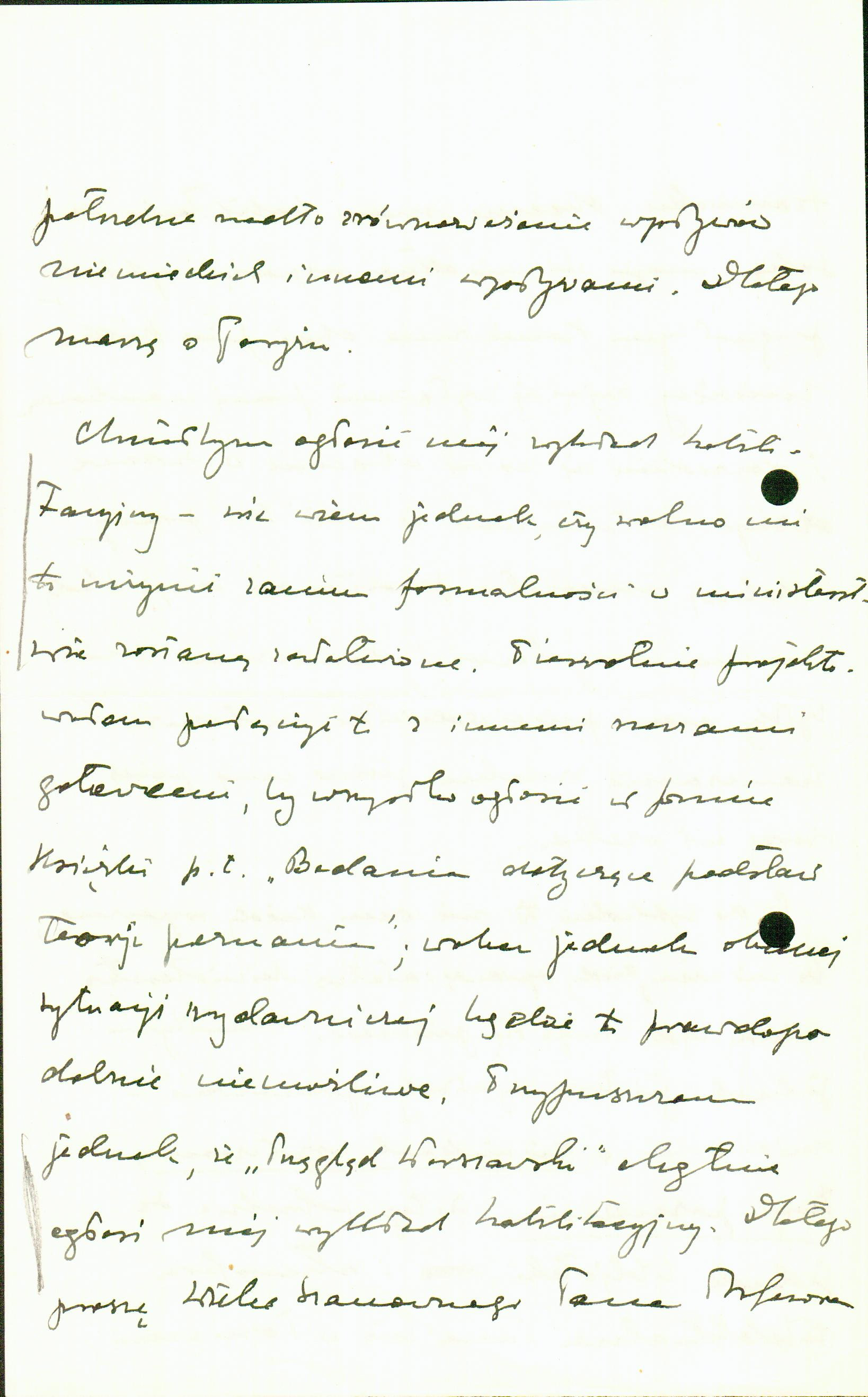 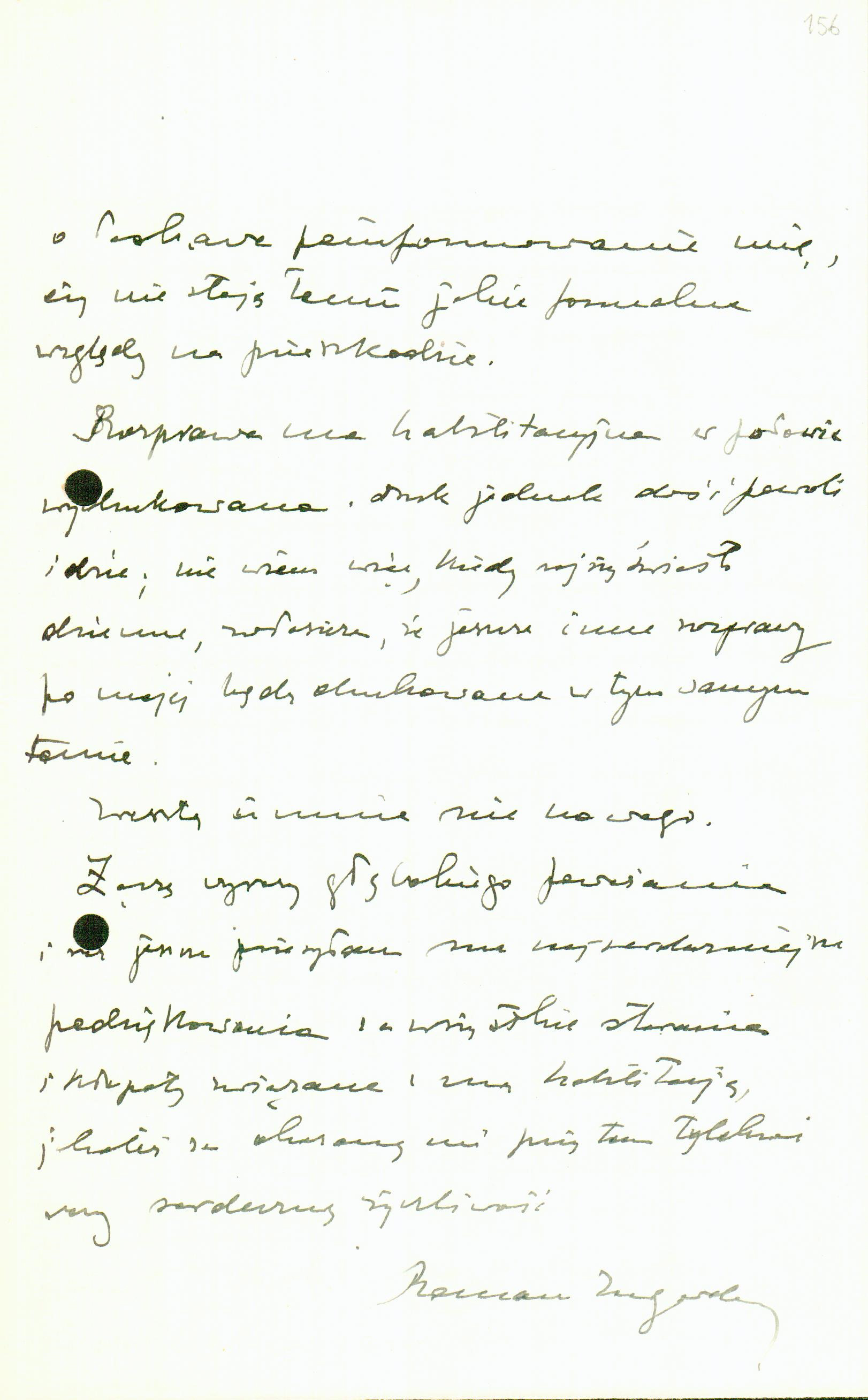 Immediately after returning from Lviv, I left for Wejherowo, where I conducted a mathematics-physics course for public-school teachers. (On this occasion I became convinced of the completely desperate state of knowledge and intelligence of public-school teachers – and this represented the cream of the crop, as all of the participants in the course had passed the seminarial matura[O1] ! ) The course lessons and exhaustion prevented me from dealing with my correspondence; thus it’s only now, following my return to Toruń, that I’m getting to it.

After saying goodbye to you, I went, as you know, to see Mr Janelli. There, I learned that during the coming school year a competition for the position of mathematics teacher at middle school no. 5 in Lviv is to be announced and that in this case I’d have priority in obtaining this position. Since it’s only in this case that I’d receive reimbursement for relocation costs, I’ve decided to wait until the competition is announced. Getting a flat in Lviv will probably cost me a significant sum – even if it were possible to work out some kind of exchange, I wouldn’t be able to bear the costs of relocation, which are very substantial (evidently around 1000 zlotys!).

The matter of my relocation to Lviv presents itself, in financial terms, such that generally I’m starting to wonder whether the whole thing is possible. I won’t be able to give any more extra lessons in middle school – because there’d be no time to prepare university lectures – whereas my wife is going to lose her job as a school doctor in Toruń and we don’t know whether she’ll manage to obtain an analogous position in Lviv. In that case, I would be condemned to my teacher’s salary (= 240 zlotys) alone, which is absolutely insufficient to support a family, especially since it’ll probably be necessary to take out a loan to get a flat and since the rent itself will be significantly higher than normal. It may turn out, then, that the costs will demonstrate the impracticality of the entire scenario.

Before beginning the lectures, I’d very much like to go to Paris, for a few months, at least, to refresh myself mentally a bit. I wrote to Mr Michalski [O2] at the Department of Science concerning this matter, but I’ve received no answer. In this connection, I’m taking the liberty of turning to you with a question as to whether the so-called ‘French scholarship’ still exists and whether, as far as the University of Lviv is concerned, the scholarship for the current year – meaning the coming school year ‒ has already been awarded. Given this opportunity, I’m permitting myself to recall that when, in the spring of 1922, I addressed myself to you with a question as to whether I might obtain such a scholarship, you answered me then that it’d be better to first obtain habilitation, and then apply for the French scholarship. Now, I’ve obtained habilitation; since I’m shortly supposed to begin lectures, I’d very much like to occupy myself exclusively with original philosophical work, even for a few months, and find out what’s happening in the world these days. Ultimately, these six years of school work must have left their traces on my mind; thus it’s necessary to counteract them, especially since there are still a number of years of school teaching in store for me.

As for the lectures, I don’t know when I’m going to start, because I don’t know when the Ministry will settle the matter and when I can relocate. However, I’d like to prepare the lectures now ‒ namely, concerning the direction of the modern theory of cognition. For this, however, libraries are necessary, as well as a different intellectual atmosphere to the one prevailing in Toruń; it’s necessary, moreover, to balance the German influence with other influences. That’s why I’m dreaming of Paris.

I’d like to publish my habilitation lecture – I don’t know, however, whether I’m permitted do this before the formalities in the ministry have been arranged. Originally, I’d intended combining it with other things that I had ready, so as to publish everything in the form of a book entitled A Study of the Bases of a Theory of Cognition; however, given the present publishing situation, that will probably be impossible. I suppose, however, that Warsaw Review will be eager to publish my habilitation lecture. Therefore, I ask you to graciously inform me whether there are any formal considerations standing in the way of this.

Half of my habilitation dissertation has been printed. However, the printing is proceeding fairly slowly; thus I don’t know when it’ll see the light of day, especially since other dissertations besides mine are going to be printed in the same volume.

Otherwise, nothing new with me.

I enclose expressions of profound esteem and once again send my sincere thanks for all your efforts and trouble in connection with my habilitation, as well as for the cordial kindness you have shown towards me so many times.