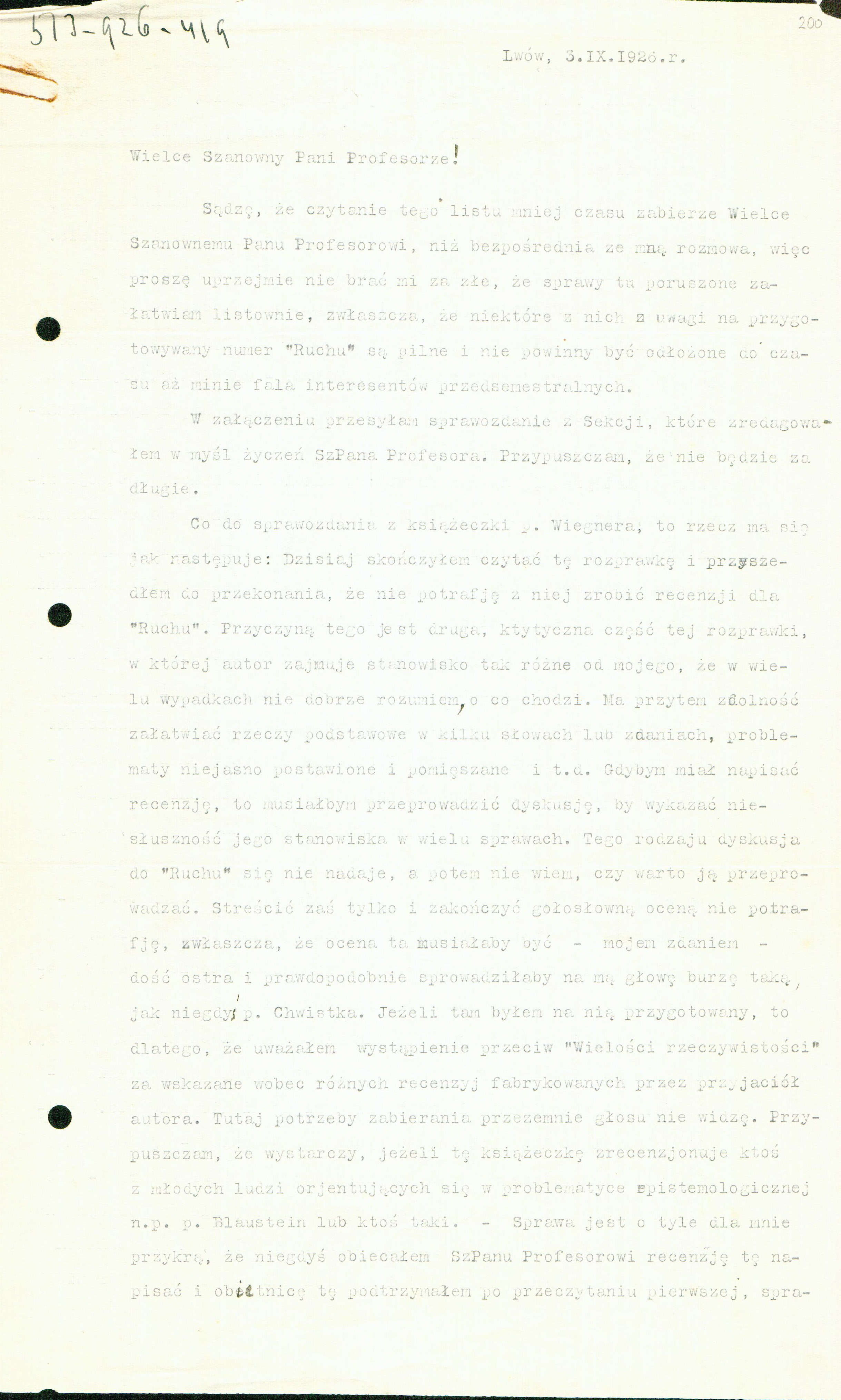 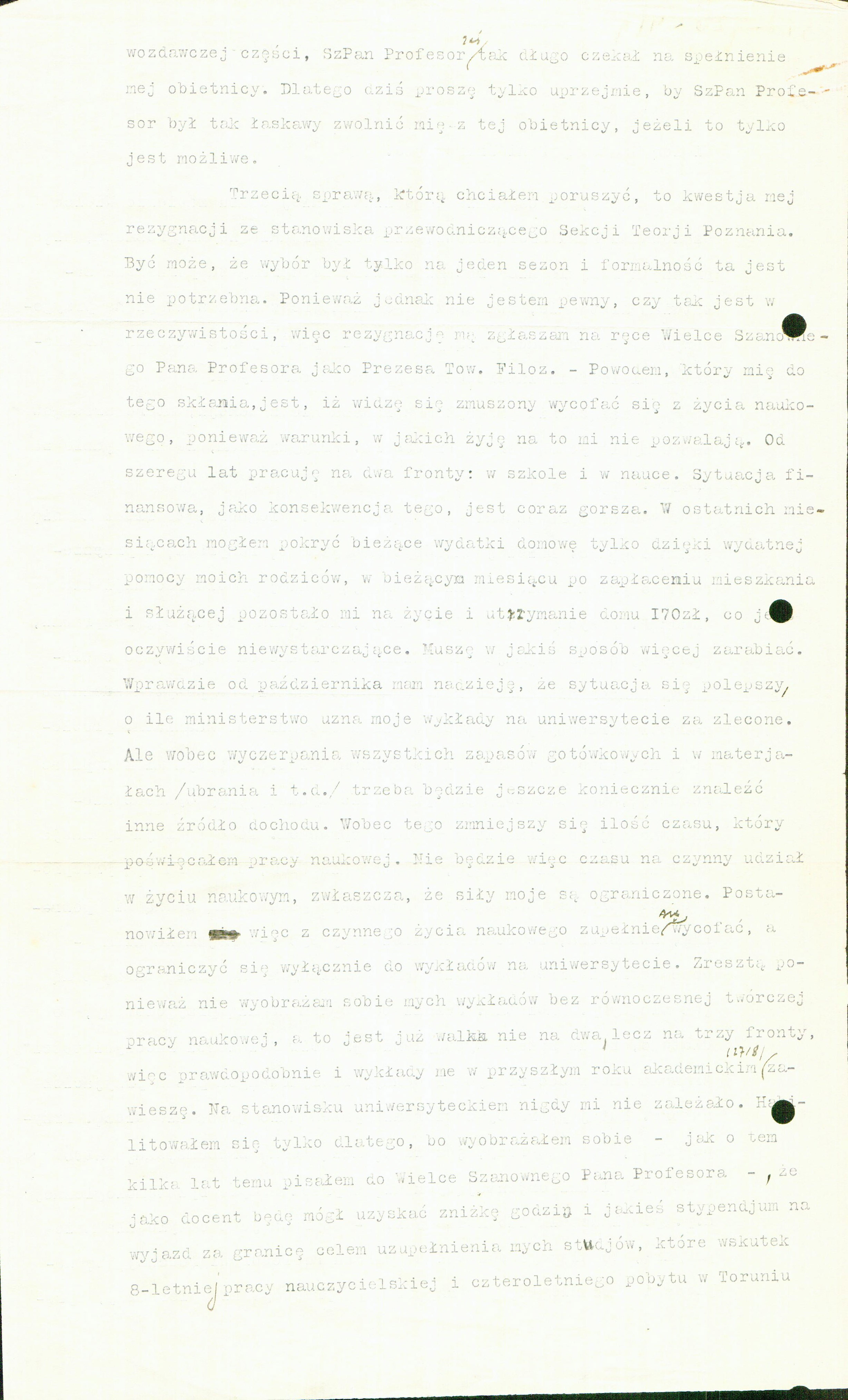 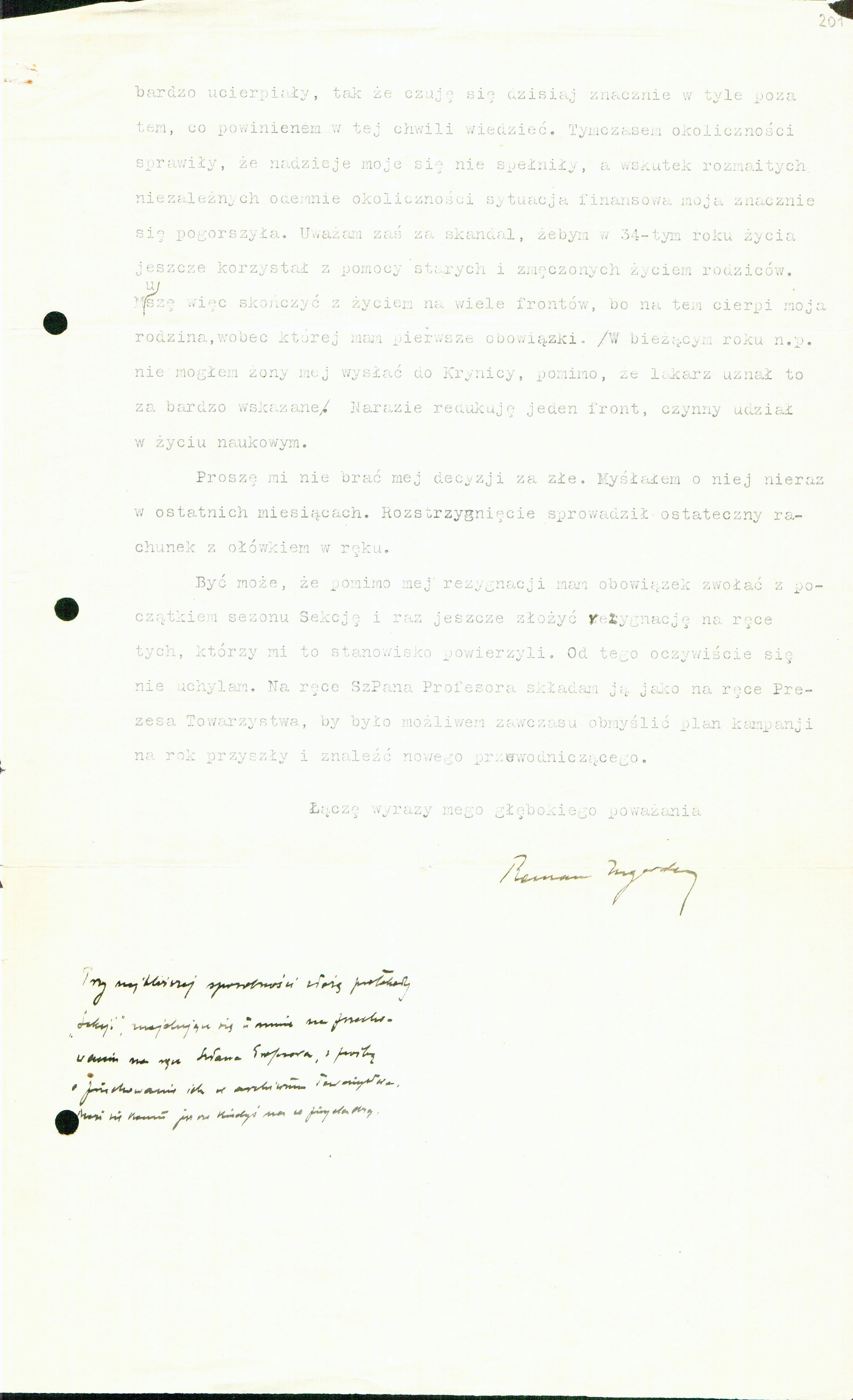 I think that reading this letter will take less of your time than a direct conversation with me, so please don’t be angry with me that I’m addressing the matters raised herein in letter form, especially since some of them, in regard to the issue of [Philosophical] Movement in preparation, are urgent and ought not to be postponed until the wave of pre-semester visitors has passed.

In the enclosure I’m sending the report on the Section, which I edited in accordance with your wishes. I don’t think it’ll be too long.

As for the report from Mr Wiegner’s[O1]  book, the matter stands as follows: today I finished reading this essay and arrived at the conviction that I won’t be able to review it for Movement. The reason for this is the second, critical part of this essay, in which the author occupies a position so different from my own that in many cases I don’t really understand what he is talking about. While he has the ability to settle basic things in a few words or sentences, problems are not presented clearly, are confused, and so on. If I were to write a review, I’d have to conduct a discussion demonstrating the incorrectness of his positions on many issues. This kind of discussion is unsuitable for Movement, and moreover, I don’t know if it’s worth conducting. I can’t merely sum up and end with a groundless evaluation, especially since that evaluation would have to be, in my opinion, quite harsh, and would probably kick up a storm, as happened once in the case of Mr Chwistek. If I was prepared for it in that case, it was because I considered it desirable to speak out against The Plurality of Realities in the face of various reviews fabricated by friends of the author. Here I see no need to speak out. I suppose that it would suffice if this booklet were reviewed by one of the young people who are conversant with epistemological issues, e.g. Mr Blaustein or someone like that. ‒ I consider the matter extremely regrettable, because at one point I promised you to write this review, and kept this promise after reading the first part (which has the character of a report), and you’ve waited so long for me to keep my promise. Therefore I ask you politely today to be so gracious as to release me, if at all possible, from this promise.

The third matter I wanted to raise is the question of my resignation from the post of chairman of the Section of the Theory of Cognition. Perhaps the election was for only one season and this formality is unnecessary. However, since I’m not sure that it actually is, I submit my resignation to you in your role as President of the Phil. Soc. ‒ The reason inclining me to this is that I see myself being forced to withdraw from academic life, as the conditions in which I live don’t allow it. For several years I’ve been working on two fronts: at school and in philosophy. The financial situation has consequently grown worse and worse. Over the last few months, I’ve been able to cover current household expenses only thanks to the generous help of my parents; this month, after paying for the flat and the maid, I was left with 170 zlotys to live on and to maintain the household, which is obviously insufficient. I need to earn more somehow. Admittedly, I hope that the situation will improve as of October, provided the ministry deems my lectures at the university as having been commissioned. But, having exhausted all of my reserves in terms of cash and material (clothing, etc.) it will still be necessary to find another source of income. In light of this, the amount of time that I devote to original philosophical work will be reduced. Accordingly, there won’t be any time for active participation in academic life, especially since my strength is limited. Thus I’ve decided to withdraw completely from active academic life, and limit myself exclusively to lectures at the university. Anyway, since I can’t imagine my lectures without simultaneous creative philosophical work, and since this is a fight not on two, but on three fronts, I’ll probably suspend my lectures over the next academic year (’27/’28). A university position was never important to me; I carried out my habilitation only because I imagined – as I wrote to you several years ago – that as a docent I would be able to obtain a reduction in hours and some kind of scholarship for a trip abroad with the aim of supplementing my studies, which, as a result of 8 years of teaching work and my 4-year stay in Toruń, had suffered so badly that I feel myself today lagging far behind what I ought to know by now. Meanwhile, circumstances have prevented my hopes from being fulfilled, and due to various circumstances beyond my control, my financial situation has deteriorated significantly. I consider it scandalous that, in my 34th year of life, I’m still taking advantage of help from my aged parents, who are already tired of life. So I have to bring life on many fronts to an end, because my family, which is my first responsibility, is suffering from it. (This year, for example I was unable to send my wife to Krynica, although the doctor considered it highly advisable.) For now, I’m withdrawing from one front: active participation in academic life.

Please don’t be angry with my decision. I’ve thought about it several times over the past few months. The latest bill provoked my conclusion, made with pencil in hand.

Perhaps, despite my resignation, I have the responsibility of convening the Section at the beginning of the season and of once again submitting my resignation to those who entrusted this position to me. Of course, I won’t evade this responsibility. I’m submitting it to you as President of the Society, so that it might be possible to think ahead about the campaign plan for the coming year and to find a new chairman.

At the earliest opportunity, I’ll submit the ‘Section’ minutes,
which are with me for safekeeping, to you with a request to
keep them in the Society’s archives. Perhaps they’ll be useful
to someone else at some point.