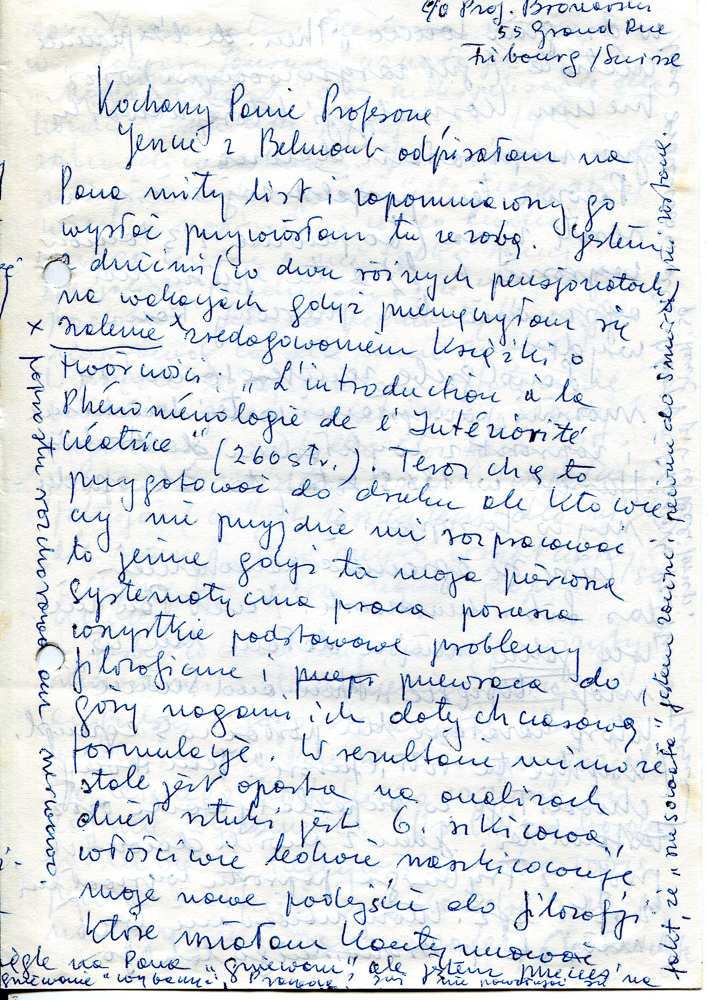 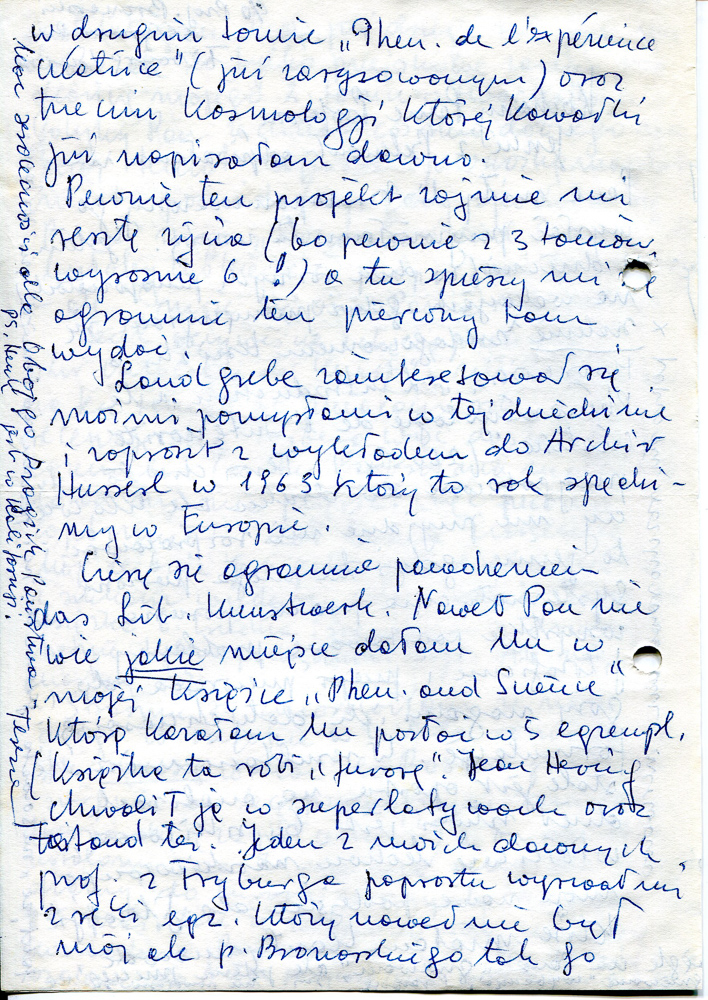 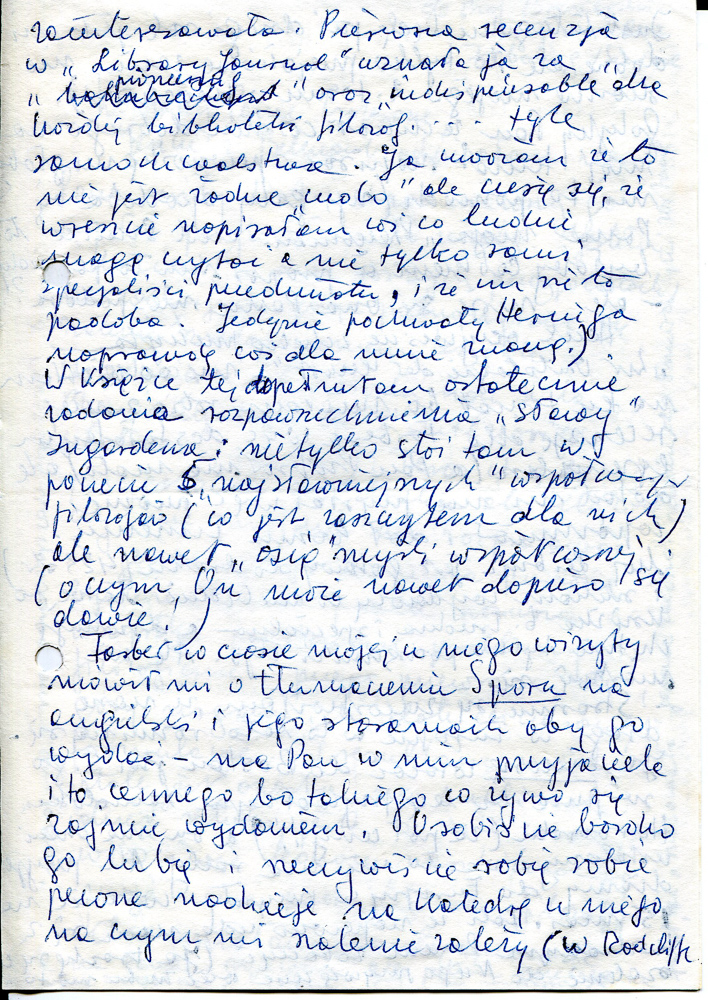 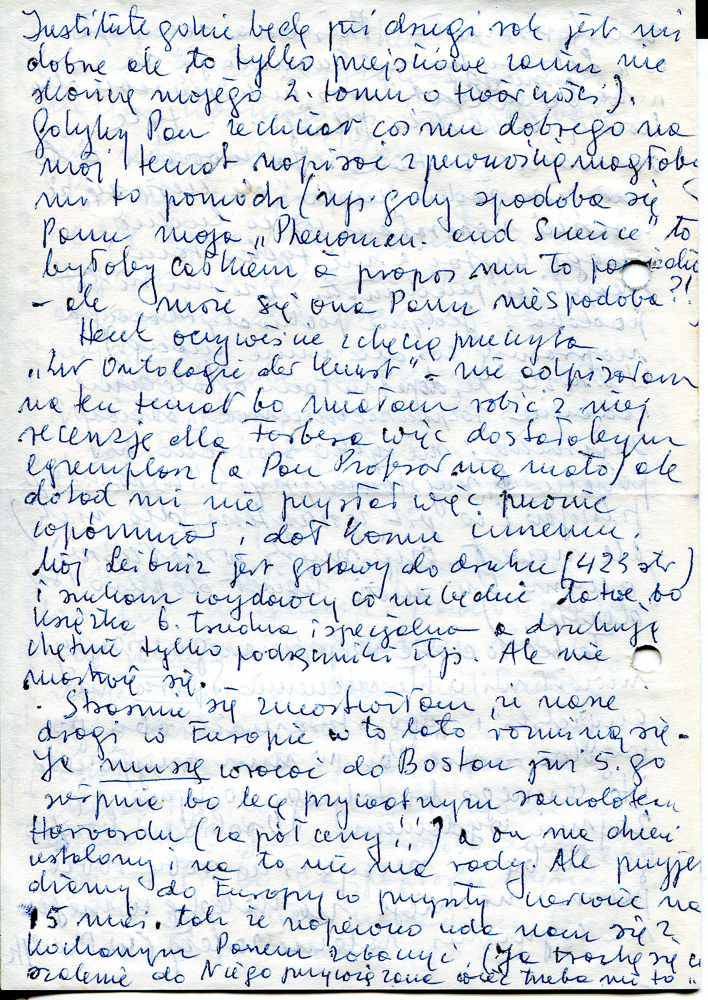 x     I wrote a reply to your kind letter while still in Belmont and, having forgotten to send it, I brought it here with me. I am on vacation with my children (in two different guesthouses), because I was insanely exhausted (just nervously sick) after writing a book on creativity: “L’introduction à la Phénoménologie de l’Intériorité créatrice” (260 p.). Now I want to prepare it for printing, but who knows if I will not have to work more on it, as this first systematic work of mine raises all basic philosophical issues and turns their current formulation upside down. As a result, despite the fact that it is consistently based on analyses of works of art, it is very rough, it barely manages to outline my new approach to philosophy which I was supposed to continue in the second volume of Phen. de l’expérience créatrice” (already outlined) and the third of cosmology – some element of which I wrote a long time ago.
x     Finishing this project will brobably take the rest of my life (because the three volumes will probably turn out to be six!), and here I am so eager to publish this first one.
x     Landgrebe became interested in my ideas in this field and invited me to the Archiv Husserl in 1963, which year we will be spending in Europe.
x     I am truly happy about the success of das Lit. Kunstwerk. You do have no idea what kind of review I gave it in my book “Phen. and Science” which I asked to be sent to you in 5 copies. (This book is a “sensation.” Jean Hering praised it in superlatives, as did and Fatand. One of my former professors from Freiburg simply snatched a copy from my hand that was not even mine but Mr. Bronarski’s – that is how much it interested him. The first review in the “Library Journal” recognized it as “pioneering” and “indispensable” to every philosophical library. … so much praise. I do not think it to be any “wonder”, but I am glad that I finally wrote something that people besides the specialists on the subject can read, and that they enjoy it. Only Hering’s praise really means something to me.) In this book, I finally completed the task of spreading Ingarden’s “fame”: not only is he counted there among 5 most famous contemporary philosophers (which is an honor for them), but even described as the “core” of contemporary thought (which perhaps he still has to find out!)
x     During my visit with Farber he told me about the translation of the Controversy into English and his efforts to publish it – you have a friend in him, and a valuable one, since he is very engaged in the process. Personally, I like him a lot and I really have some hopes for a professorial positon at his institution, which I honestly want very badly (I feel good at the Radcliff Institute where I will be completing my second year, but it is only temporary until I finish my second volume on creativity). If you would like to write something good to him about me, it could certainly help me (for example, if you like my “Phenomen. And Science”, it would be quite appropriate to tell him – but maybe you won’t like it?!)
x     Henk, of course, will read “Der Ontologie der Kunst” with pleasure – I did not write about it, as I was supposed to prepare a review of it for Farber so I would get a copy (and you only have a few), but so far they have not sent me one, so he probably forgot and gave it to someone else. My Leibniz is ready for printing (423 pages) and I am looking for a publisher, which will not be easy because the book is very difficult and special – and they only readily print textbooks, etc. But I am not worried.
x     It really upset me that we will miss each other in Europe this summer. I have to go back to Boston on the 5th of August, because I am flying a private Harvard plane (for half the price!!) and it has a fixed flight plan and there is nothing I can do about it. But we will come to Europe next June for 5 months, so we will definitely meet. (I am still a little “angry” with you, but I am madly attached to as well, so you have to “forgive” my anger. Right? Not to mention that I am always “unhinged”, and will probably remain this way until the day I die. Cordial greetings for the both of you – Teresa

PS. Henk is in California.