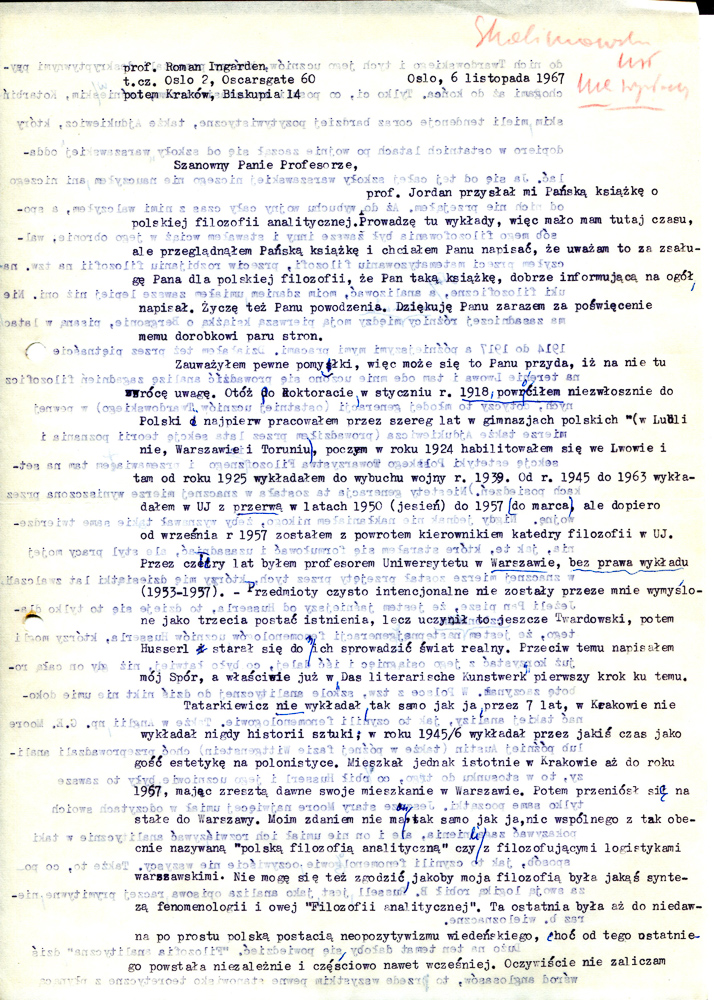 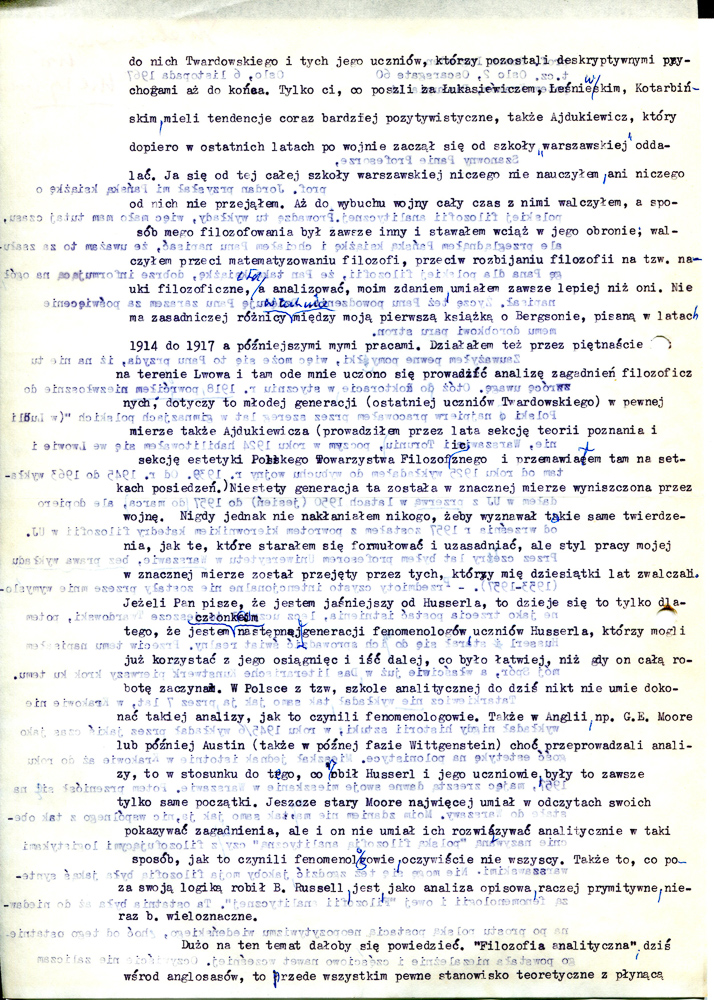 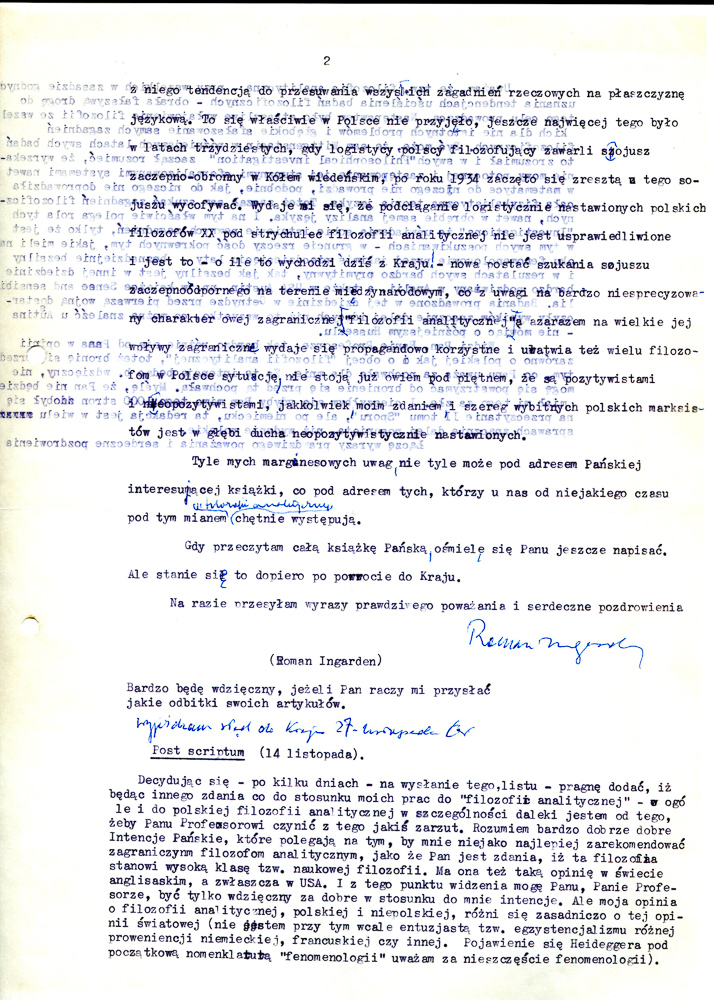 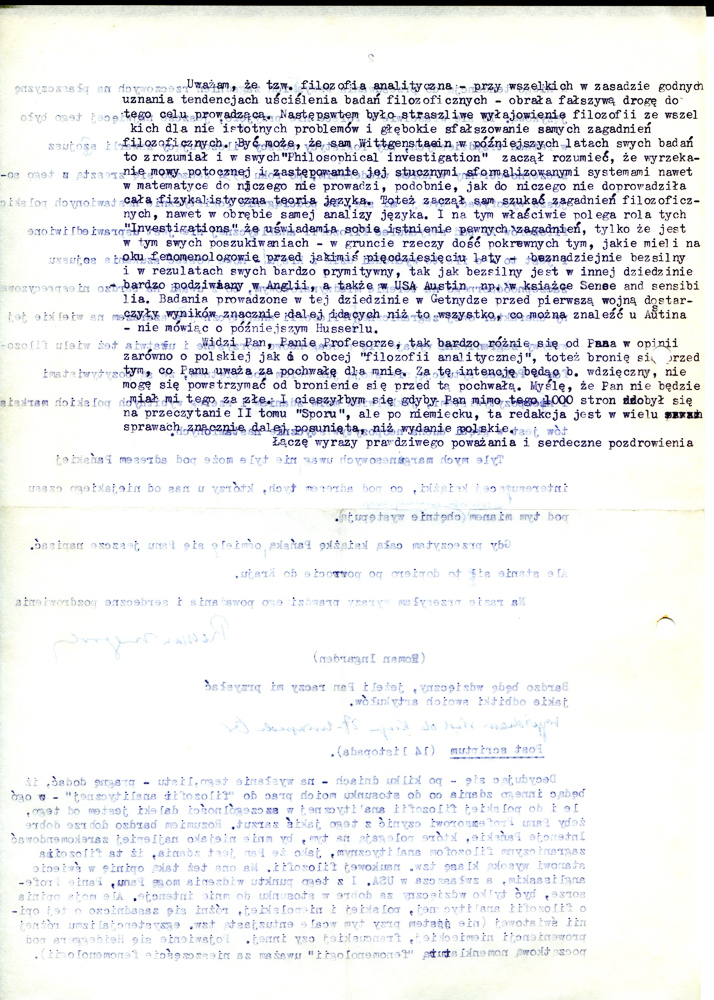 I’d be very grateful if you wouldn’t mind sending me offprints of your articles.

I’m leaving for Poland on 27 November of this year.

n  In deciding – after a few days – to send this letter, I’d like to add that – being of a different opinion regarding the relationship of my work to ‘analytical philosophy’ in general, and to Polish analytical philosophy in particular – I’m by no means making any accusations against you. I understand very well your good intentions, which consist of recommending me in some way to analytical philosophers abroad, as you’re of the opinion that this philosophy constitutes so-called academic philosophy of the highest class. It also has such a reputation in the Anglo-Saxon world, especially in the USA. And from this point of view, I can only thank you for your good intentions in relation to me. However, my opinion about analytical philosophy, both Polish and non-Polish, differs fundamentally from this global opinion (in this regard, I’m not at all enthusiastic about the so-called existentialism of different provenance, German, French or other. I consider the appearance of Heidegger under the initial nomenclature of ‘phenomenology’ a misfortune for phenomenology.).
n    I believe that so-called analytical philosophy – with all its tendencies, which are fundamentally worthy of recognition, to refine philosophical research – has chosen a false path to this goal. The consequence was a terrible evisceration of philosophy, stripping it of all the problems essential to it, and a profound falsification of philosophical issues themselves. It’s possible that Wittgenstein himself, in the later years of his research, understood this, and in his Philosophical Investigation he began to understand that renouncing colloquial speech and replacing it with artificial formalised systems, leads nowhere, even in mathematics, just as the whole physicalist theory of language led nowhere. So he himself began to seek philosophical issues, even within the field of analysis of language. And the role of these Investigations actually depends on its realisation of the existence of certain issues; it’s only that in his search – which is in fact very closely related to what phenomenologists had had their eyes on for some fifty years – he’s hopelessly powerless, and extremely primitive in his results, just as, in another field, Austin, who is very much admired in England as well as in the USA, is powerless, e.g. in the book Sense and Sensibilia. Research conducted in this area in Göttingen before the first war supplied results that went much further than everything that can be found in Austin, let alone, later, Husserl.
n    You see, sir, how greatly I differ from you in my opinion of both Polish and foreign ‘analytical philosophy’, and thus I defend myself against what you regard as praise for me. Although very grateful for this intention, I can’t resist defending myself against this praise. I don’t think you’ll hold this against me. And I’d be glad if you would undertake the reading of the second volume, despite its 1,000 pages, of Spór – but in German, as this edition is in many xxxxx matters significantly more advanced than the Polish edition.

I enclose expressions of genuine esteem and cordial greetings

Letter from Władysław Witwicki, n/d B