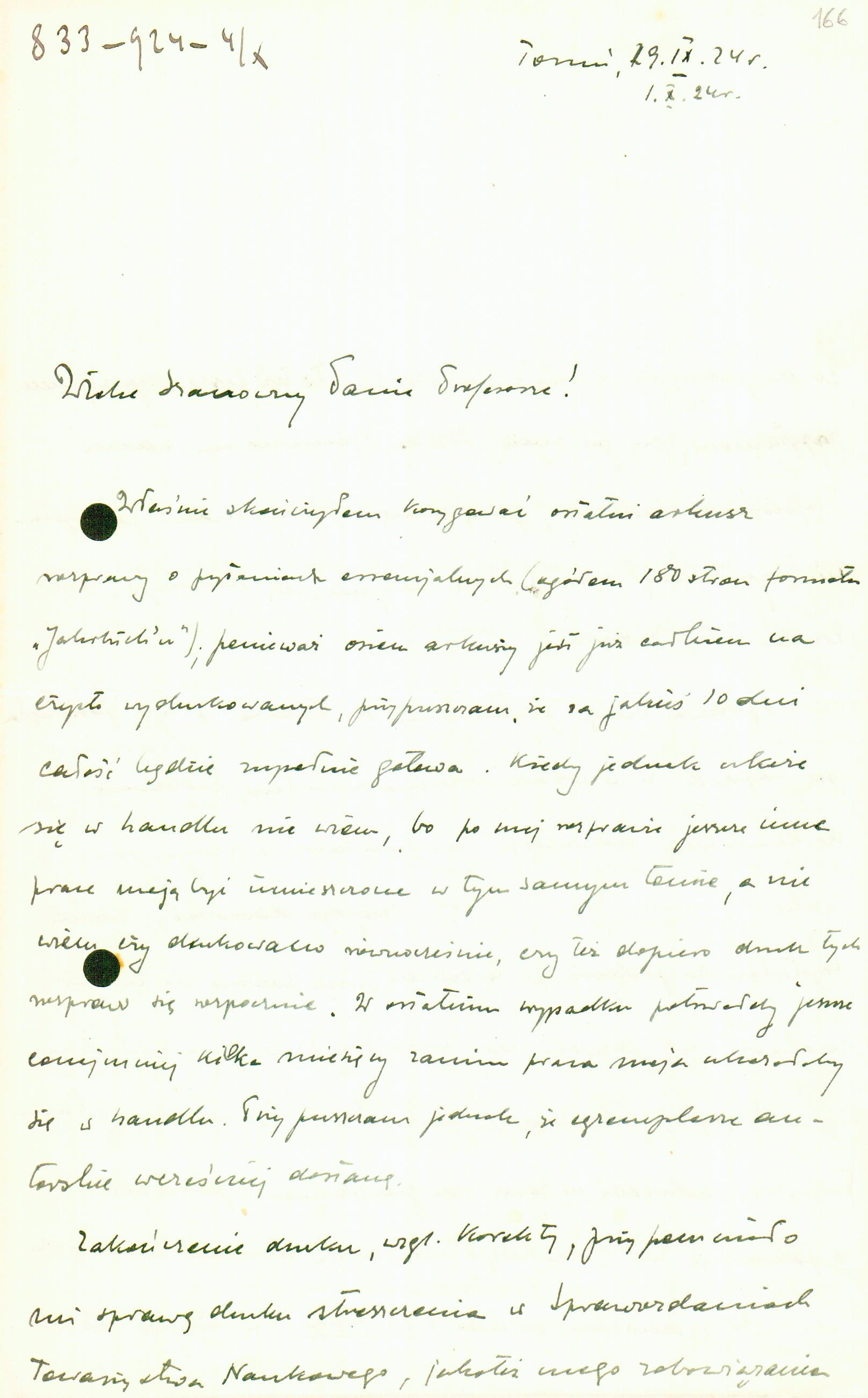 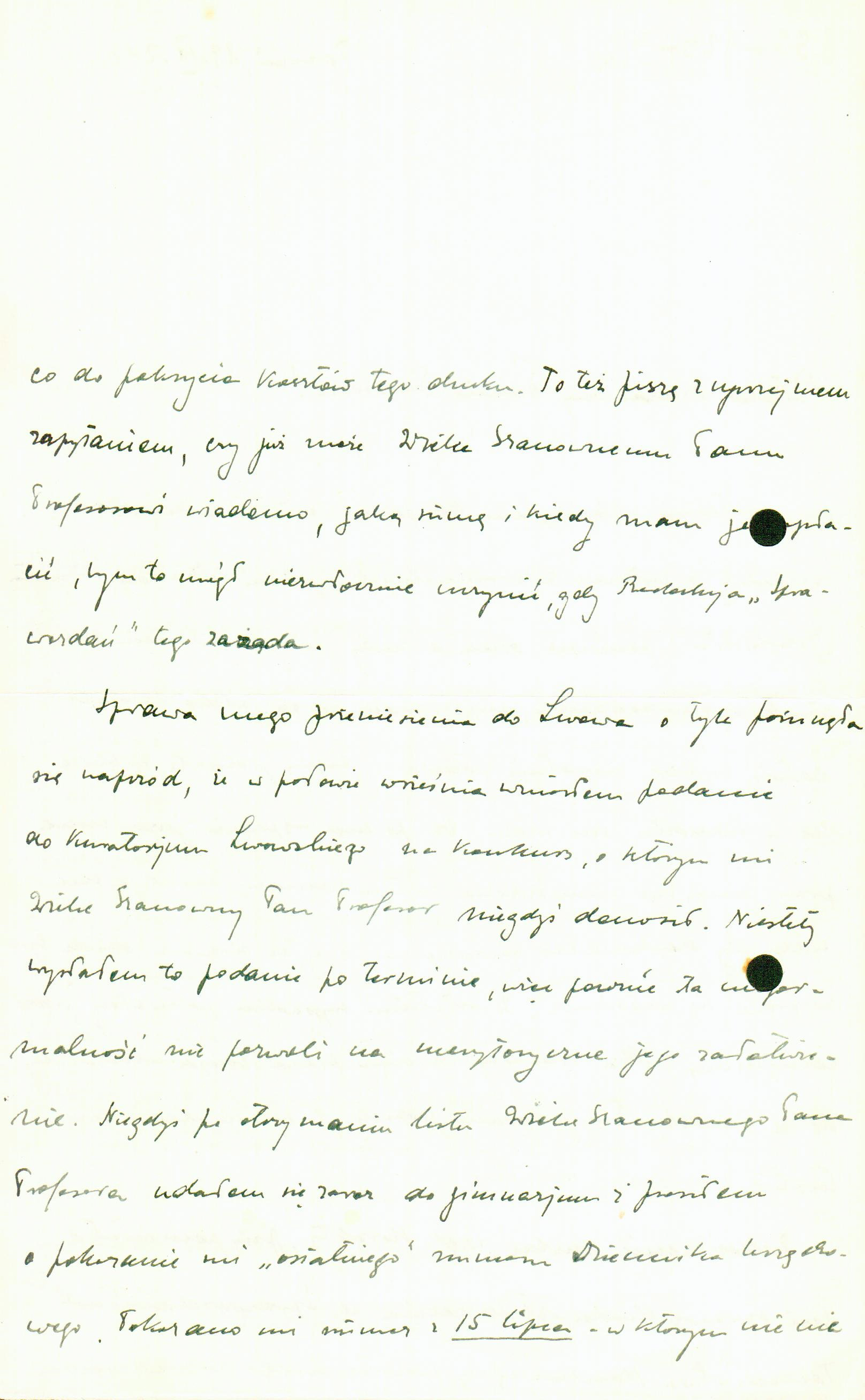 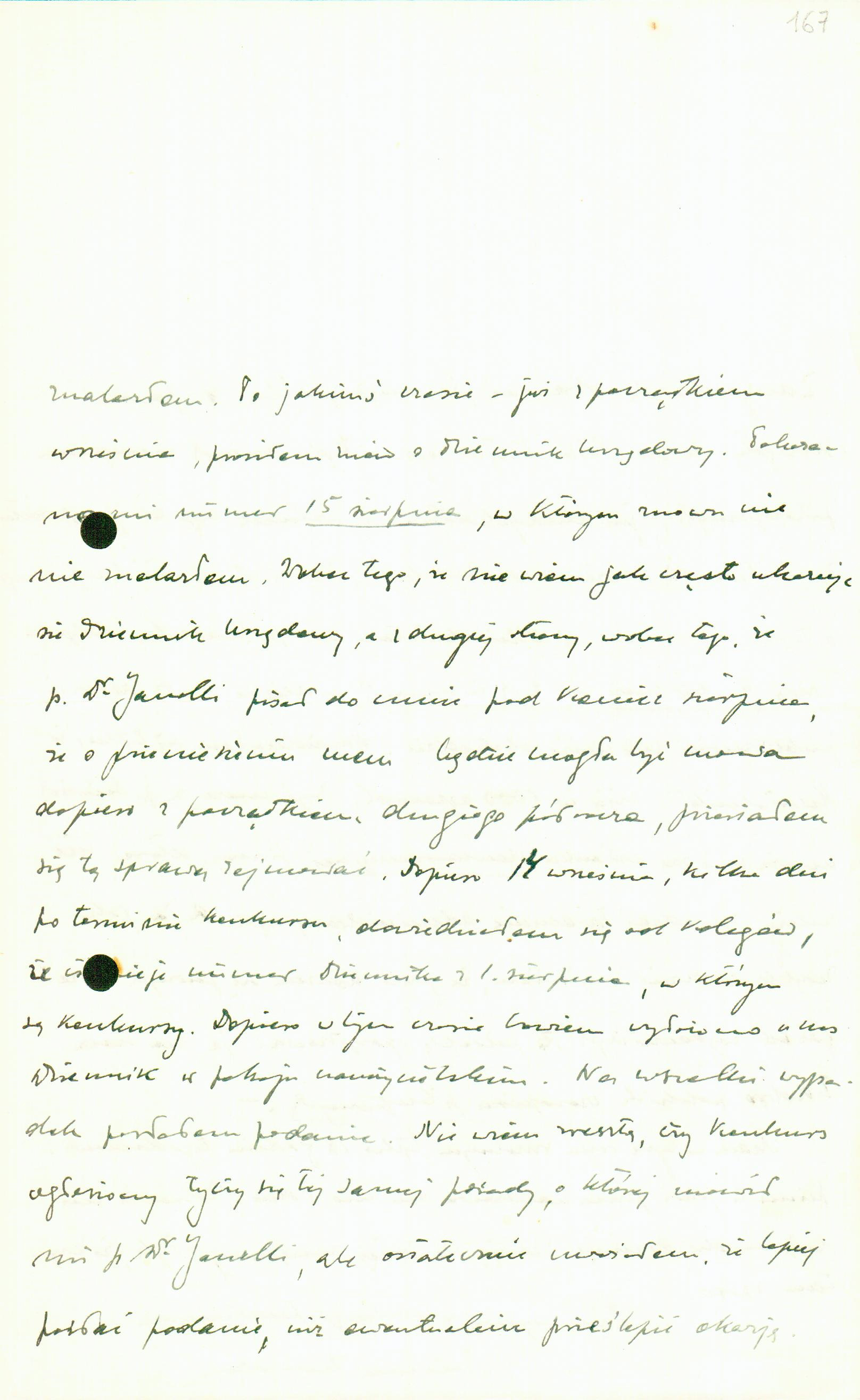 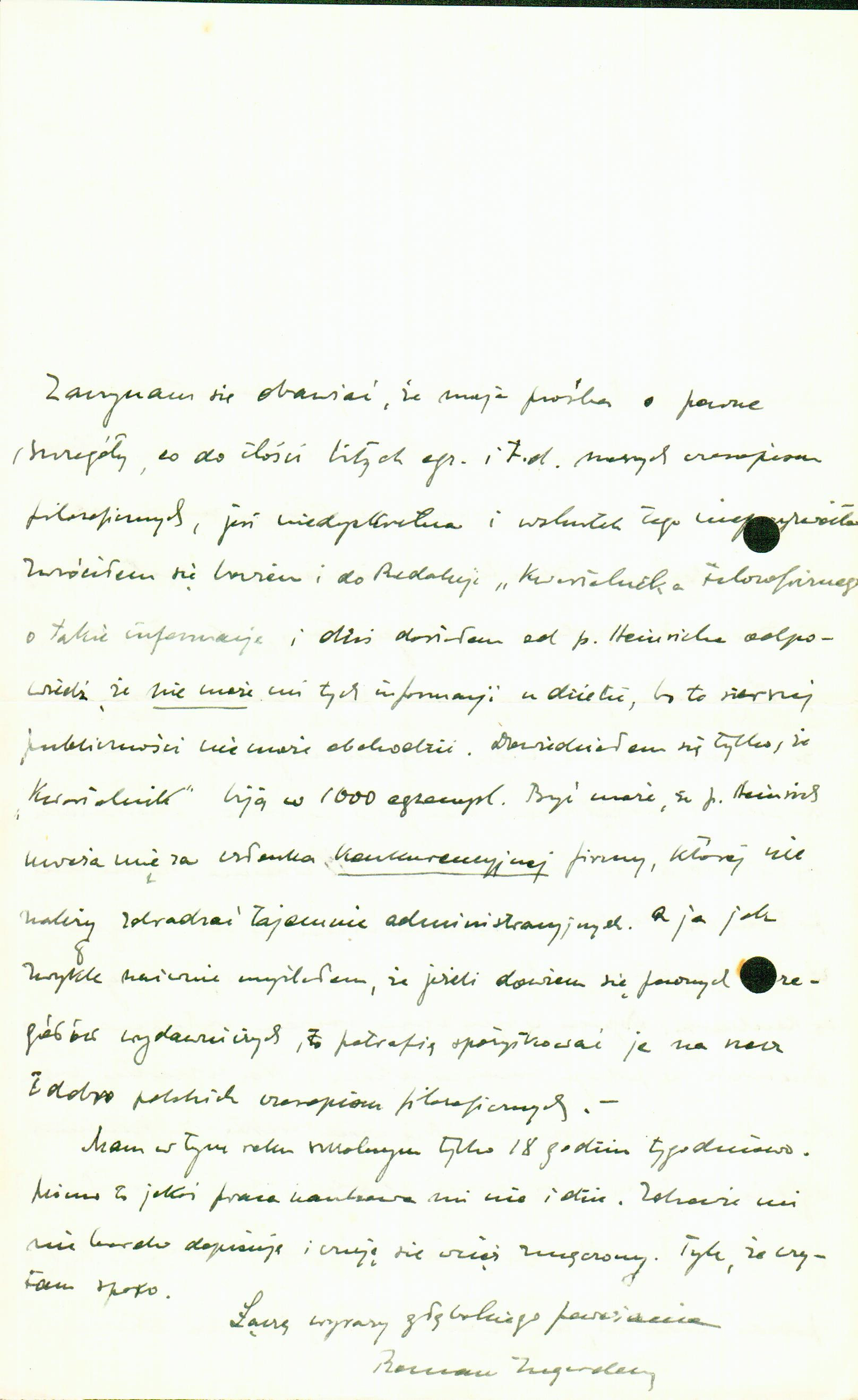 I’ve just finished correcting the last arkusz of the thesis on essential questions (a total of 180 pages in the [Philosophical] Yearbook format); given that eight arkuszy are already completely printed, I suppose that in about 10 days the whole thing will be completely ready. However, I don’t know when it’ll go on sale, since other papers are supposed to be placed in the same volume following my dissertation, and I don’t know whether they were printed at the same time, or whether the printing of these dissertations is only about to begin. In the latter case, it’ll still be at least a few months before my paper appears on the market. I suppose, however, that I’ll receive my author’s copies.

The completion of printing, or of the proof stage, reminded me of the issue of printing the summary in the Reports of the Scientific Society, as well as my obligation to cover the costs of this printing. I’m also writing to ask politely whether you know yet what the total is and when I’m supposed to pay it, so that I’ll be able to so without delay when the Editorial Staff of Reports requests it.

The matter of my relocation to Lviv has moved ahead insofar as that in mid-September I applied to the Lviv Board for the competition you once told me about. Unfortunately, I sent this application after the deadline, so probably this formality[O1]  will prevent it from being settled on merit. At some point after receiving your letter, I went straight to the middle school and asked to be shown the ‘latest’ issue of the Official Journal. I was shown the issue of 15 July, in which I found nothing. After some time, at the beginning of September, I asked again for the Official Journal. They showed me the issue of 15 August, in which I again found nothing. Given that I don’t know how often the Official Journal appears, and that, on the other hand, Dr Janelli wrote to me at the end of August that my relocation would be possible only at the beginning of the second semester, I stopped concerning myself with this matter. It was not until 14 September, a few days after the deadline for the competition, that I learned from my colleagues that there was an issue of the Journal from 1 August which included the competitions. Indeed, it was only at that time that the Journal was left with us in the teachers’ room. Just in case, I sent an application. However, I don’t know whether the announced competition concerns the same position Dr Janelli spoke to me about. But ultimately I thought it better to send an application than to potentially waste the opportunity.

I’m beginning to fear that my request for certain details as to the number of copies printed, etc. of our philosophical journals is indiscreet and thus inappropriate. I turned to the editors of Philosophical Quarterly for information of this type, and today I received a reply from Mr Heinrich [O2] to the effect that he can’t give me this information, because it’s not a matter of concern to the wider public. I learned only that they print 1,000 copies of Quarterly. Perhaps Mr Heinrich considers me a member of a competitive firm to whom administrative secrets ought not be betrayed. Whereas I, naively as always, thought that if I were to learn some details concerning publishing, I could use them on behalf of and to the benefit of Polish philosophical journals. ‒

This school year, I have only 18 hours per week. Even so, somehow the competition effort isn’t going well for me. My health isn’t very good and I constantly feel tired. At least I read a lot.