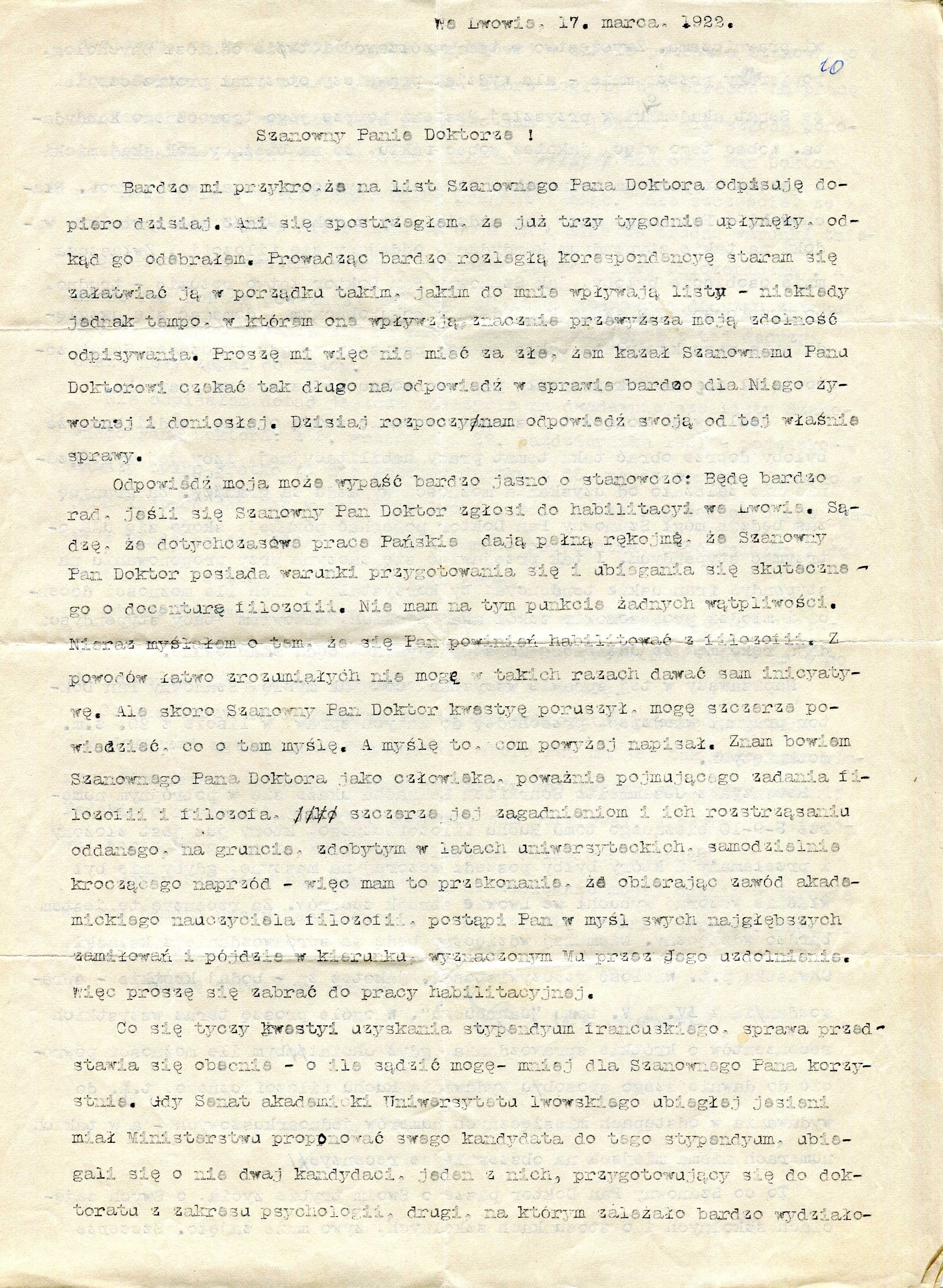 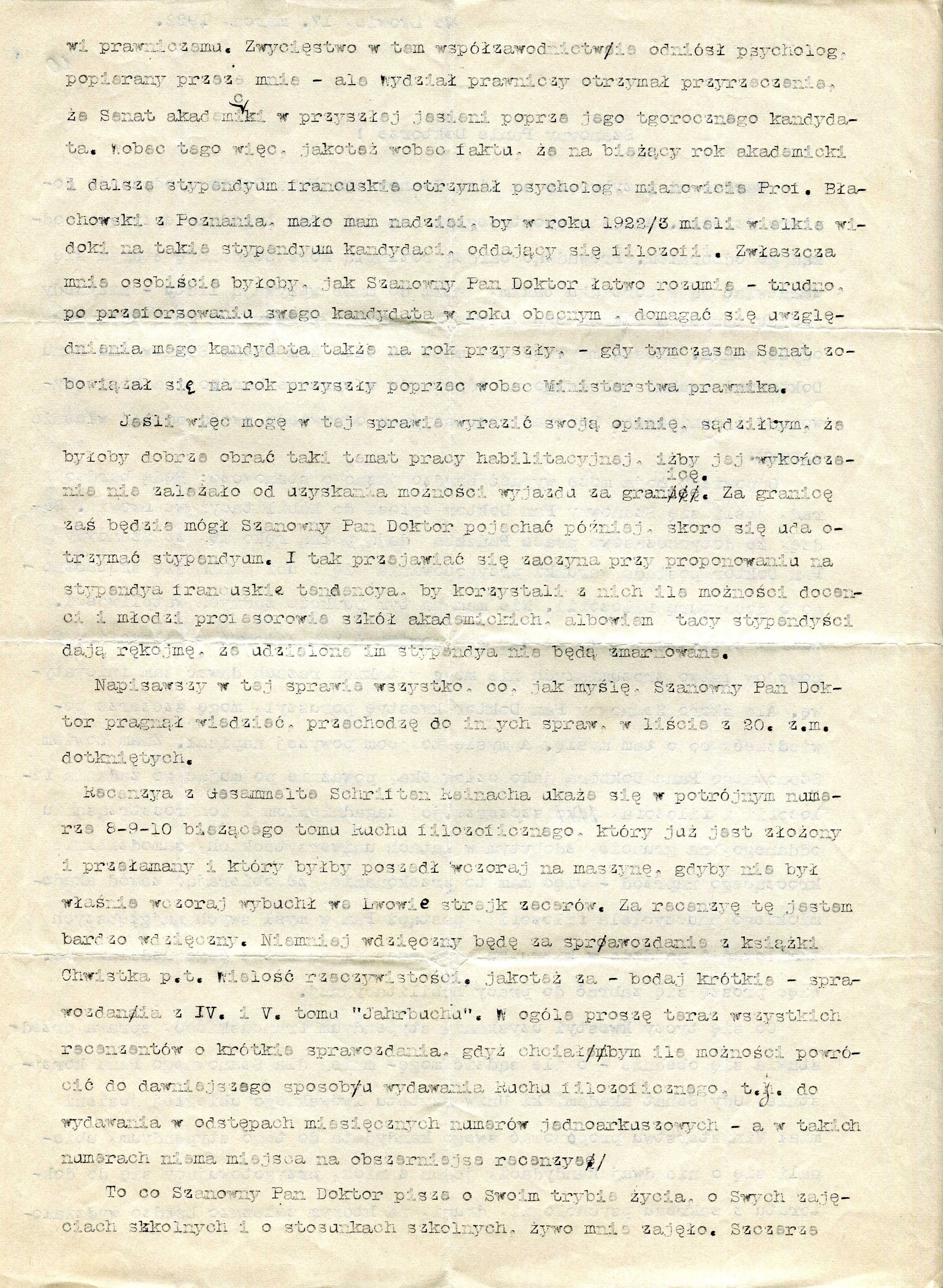 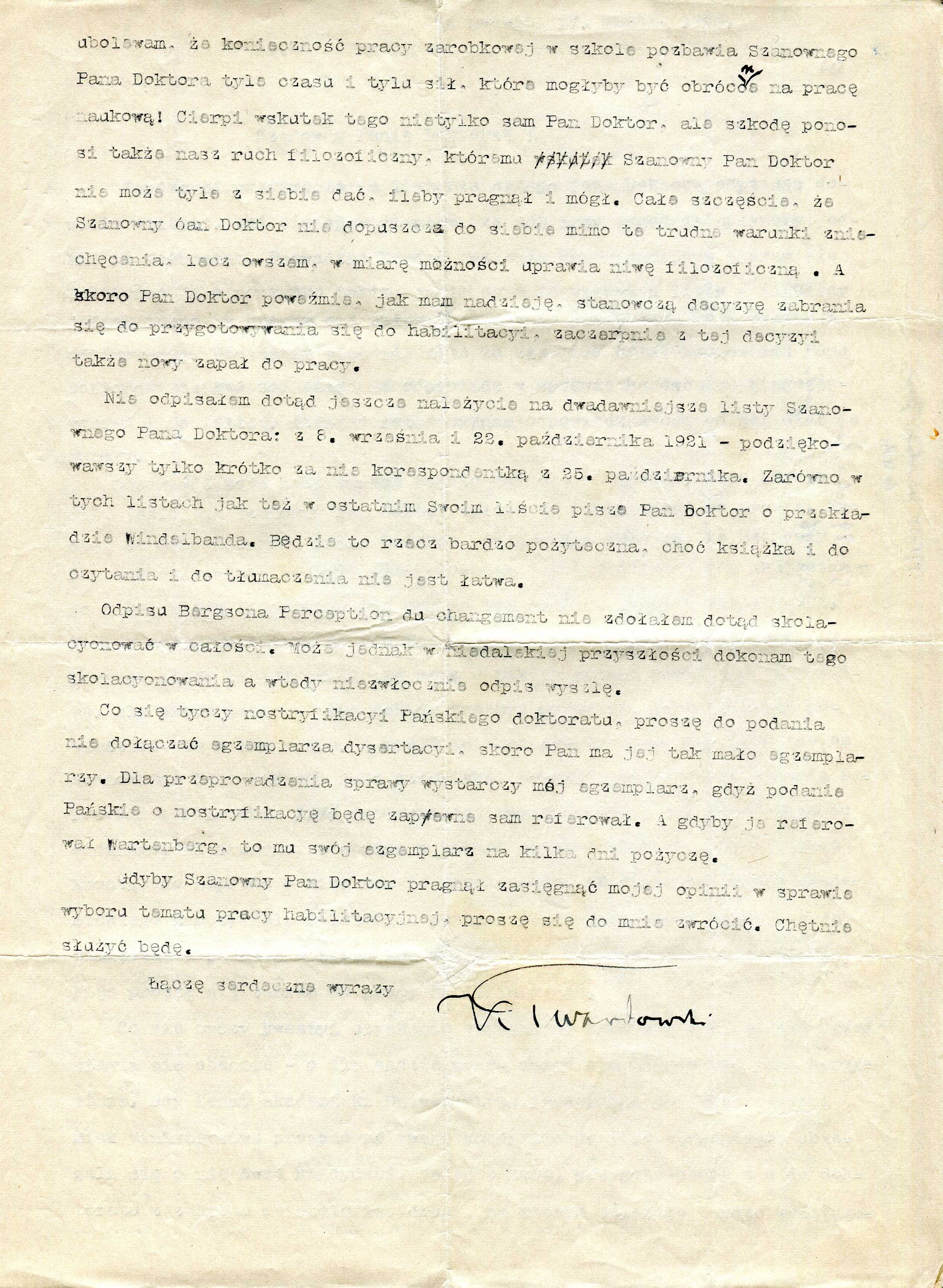 I’m very sorry that I’m replying to your letter only today. I hadn’t realised that three weeks had already gone by since I received it. In conducting my very extensive correspondence, I try to take care of it in the order the letters come to me. Sometimes, however, the rate at which they come in significantly exceeds my capacity to answer them. So please don’t hold it against me that I’ve made you wait so long for a response in a matter that is extremely vital and momentous for you. It’s with this matter that I’ll begin my reply today.

My response can be stated very clearly and firmly: I’ll be very glad if you apply for habilitation in Lviv. I believe that your papers to date provide a full guarantee that you possess the capacity to effectively prepare and apply for a docenture in philosophy. On this point, I have no doubts. More than once I have thought that you should become habilitated in philosophy. For reasons that are easily understood, I can’t provide the initiative myself in such situations. But since you’ve raised the issue, I can say honestly what I think about it. And what I think is what I’ve written above. For I know you as an individual who takes the task of philosophy and the philosopher seriously, who’s sincerely devoted to unravelling its enigmas, who is, on the foundation acquired during university years, independently moving forward – thus I’m convinced that by choosing the profession of an academic teacher of philosophy, you’ll be acting in accordance with your deepest passions and moving in the direction your talent has destined for you. Accordingly, I invite you to begin work on your habilitation thesis.

As regards the issue of obtaining the French scholarship, at the moment the matter presents itself ‒ to the extent that I can judge ‒ less favourably for you. When the Academic Senate of the University of Lviv was to propose its candidate for the scholarship to the Ministry this past autumn, two candidates applied; one was preparing for a PhD in psychology; the law department had great hopes for the other. Victory in this competition went to the psychologist, who was supported by myself; but the law department obtained a pledge that the Academic Senate would support this year’s candidate next autumn. In view of that, then, as well as in view of the fact that the psychologist, namely, Prof. Błachowski[O1]  from Poznań, received the scholarship for the current academic year and beyond, I have little hope that candidates devoted to philosophy would enjoy great prospects for this scholarship in 1922/3. In any case, for me personally ‒ as you’ll readily understand ‒ it would be difficult, after pushing through my own candidate this year, to demand that my candidate be considered next year as well ‒ when meanwhile the Senate has committed itself to the Ministry to support the lawyer next year.

If, then, I may express my own opinion in this matter, I’d think it’d be a good idea to choose a topic for your habilitation thesis, provided that its completion doesn’t depend on obtaining an opportunity to go abroad. You’ll be able to go abroad later, provided that you succeed in getting a scholarship. And, in terms of the French scholarships, the trend is becoming apparent that they’re to be used by as many docents and young professors from academic schools as possible, since the granting of scholarships to recipients of this kind guarantee that they won’t be wasted.

Having addressed everything (I think) that you wished to know about this matter, I’ll move on to other issues addressed in your list of the 20th of last month.

The review of Reinach’s Gesammelte Schriften [Collected Writings] will appear in the triple issue 8/9/10 of the current volume of Philosophical Movement, which has already been laid out and which would have been set yesterday, if not for the typesetters’ strike called yesterday in Lviv. I’m very grateful for this review. Nevertheless, I’d be grateful for a report on Chwistek’s book Wielość rzeczywistości [The Plurality of Realities] as well as (at least brief) reports on Volumes IV and V of [Phenomenological] Yearbook. Generally, I’m asking all reviewers for brief reports now, since I’d like to go back to the old way of publishing Philosophical Movement, that is, to publishing single-arkusz[O2]  issues on a monthly basis ‒ and in those issues there’s no room for more extensive reviews.

What you write about your mode of life, about your school lessons and situation, concerned me greatly. I sincerely regret that the necessity of gainful employment at the school deprives you of so much time and strength that could be turned into original work! As a result, not only do you yourself suffer, but our philosophical progress, to which you’re unable to give as much as you’d like and are capable of, is likewise harmed. It’s fortunate that you don’t allow yourself, despite these difficult conditions, to become discouraged, but that instead you practise, insofar as possible, the cultivation of philosophy. And since you’re going to make, I hope, the firm decision to prepare yourself for habilitation, you’ll also gain new zeal for work from this decision.

I haven’t yet replied properly to your two previous letters, those of 8 September and 22 October 1921, having thanked you only briefly with my note of 25 October. Both in these and in your latest letter, you write about the Windelband translation. This will be a very useful thing, although the book is easy neither to read nor to translate.

I haven’t been able to fully compare the copy of Bergson’s Perception du changement [The Perception of Change] with the original. However, perhaps in the near future I’ll make this comparison, and then send a copy without delay.

As regards the nostrification of your doctorate, please don’t attach a copy of the dissertation to the application, since you have so few copies of it. To resolve this matter, my copy will suffice, since I’ll probably handle your application for nostrification myself. And if Wartenberg[O3]  handles it, I’ll lend him my copy for a few days.

If you’d like to seek my opinion on the choice of a topic for the habilitation thesis, please contact me. I’ll be happy to help.