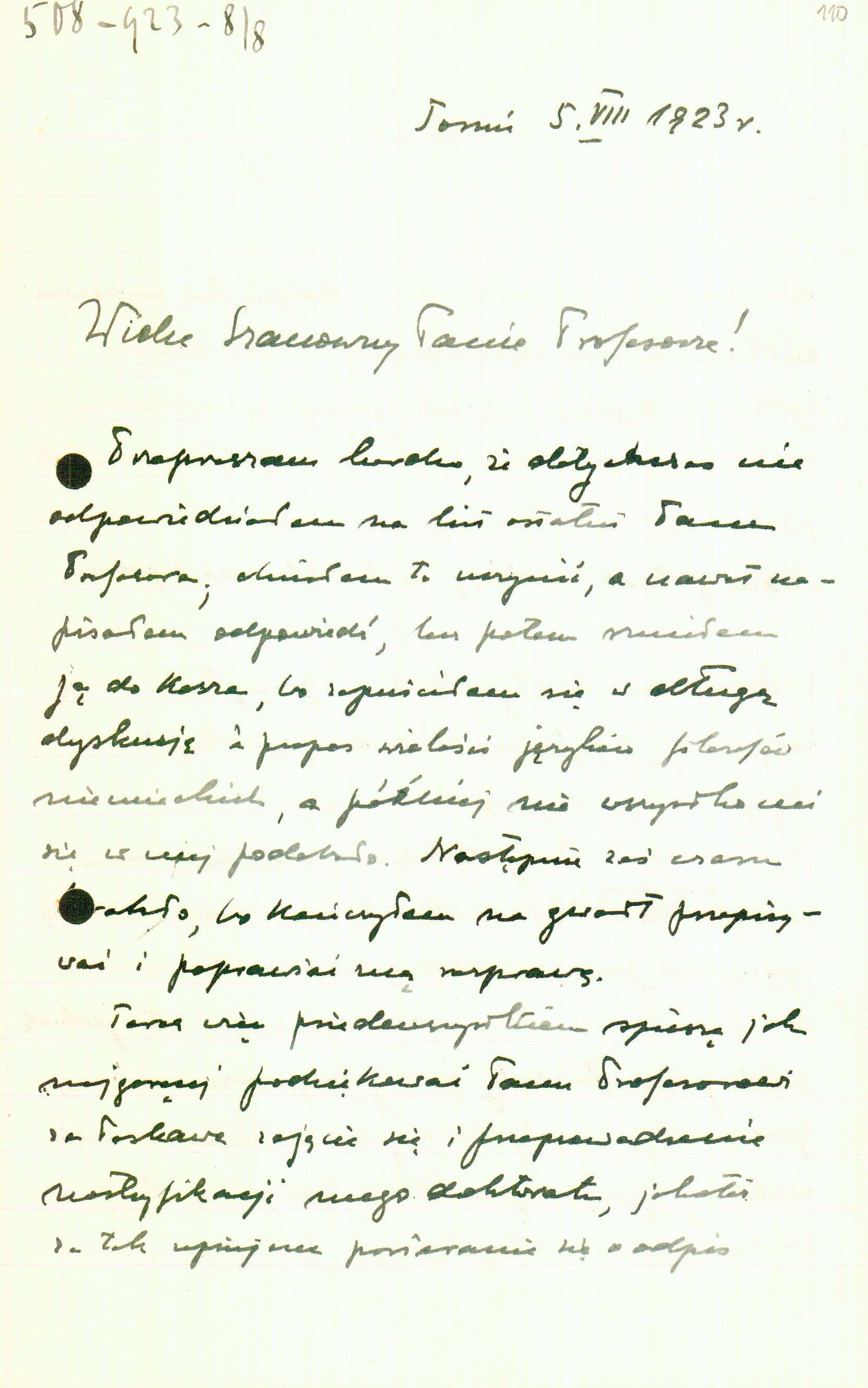 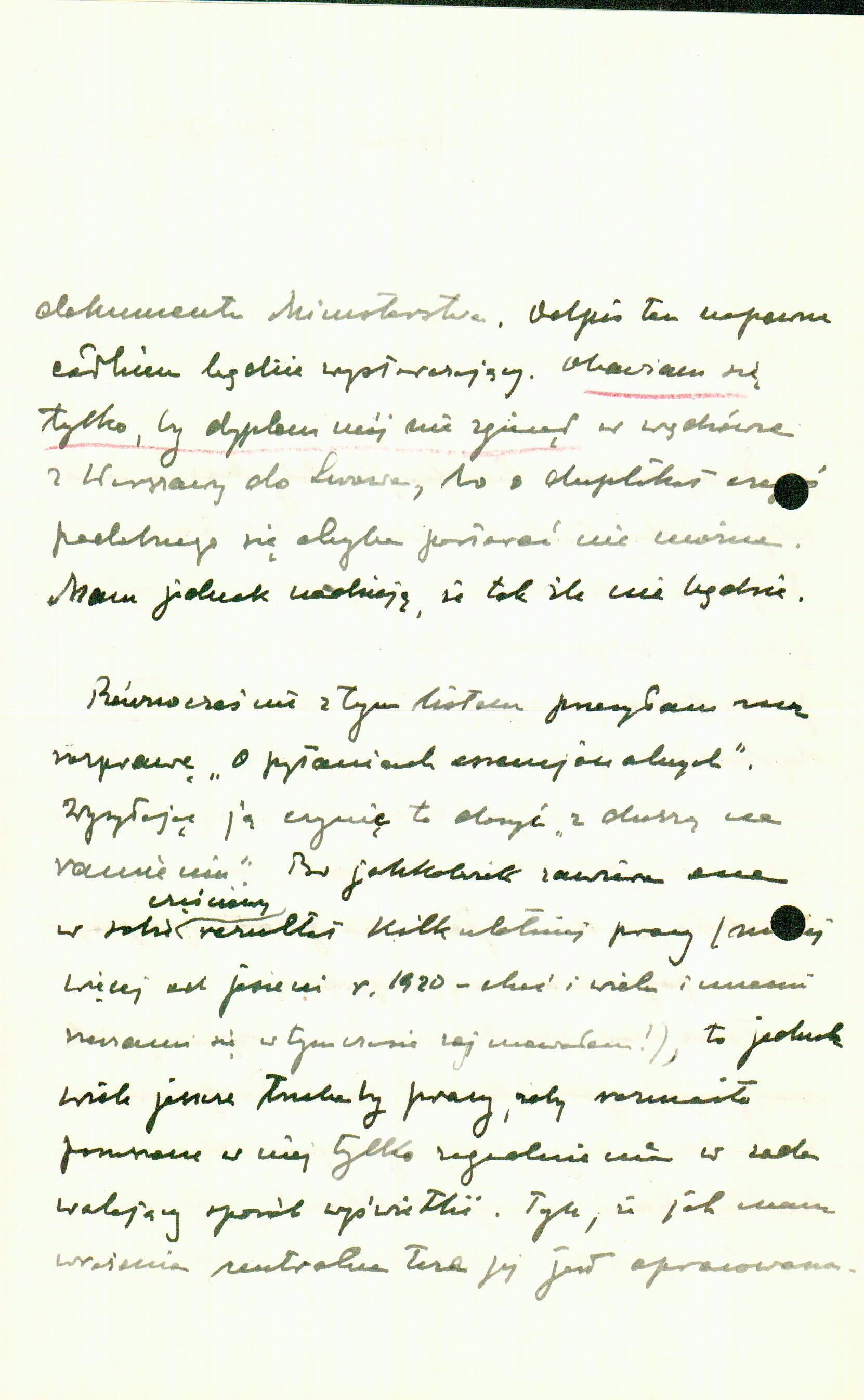 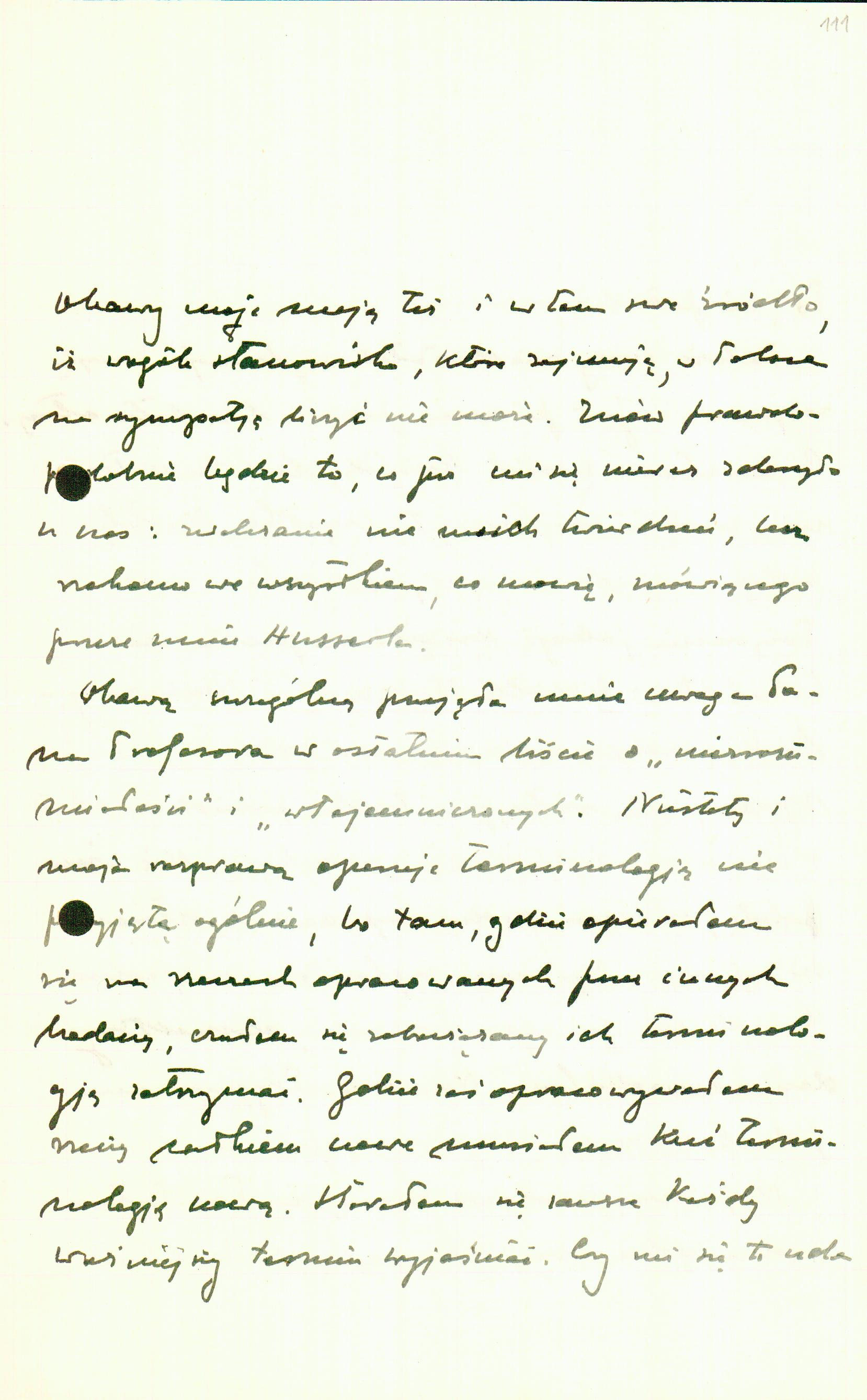 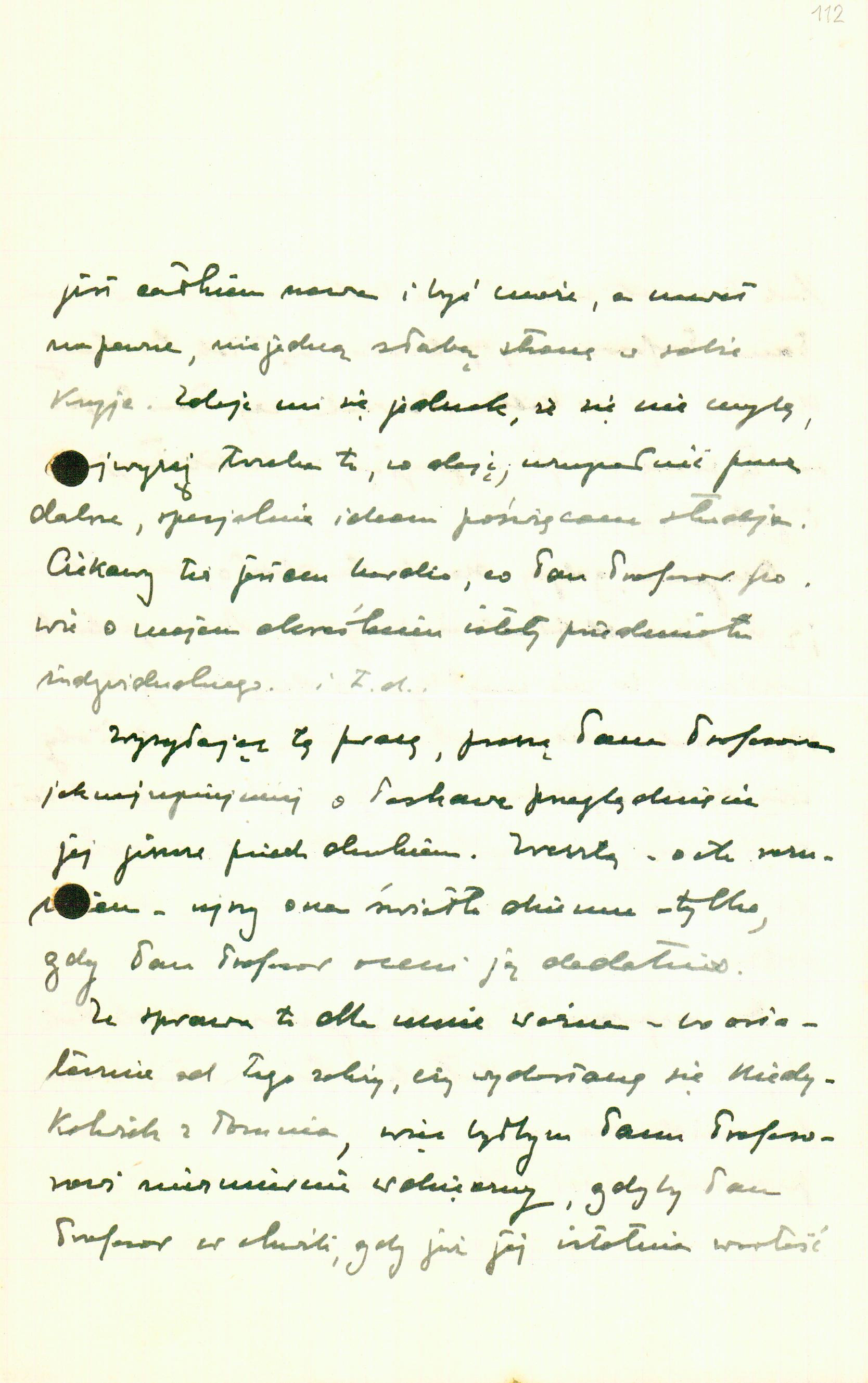 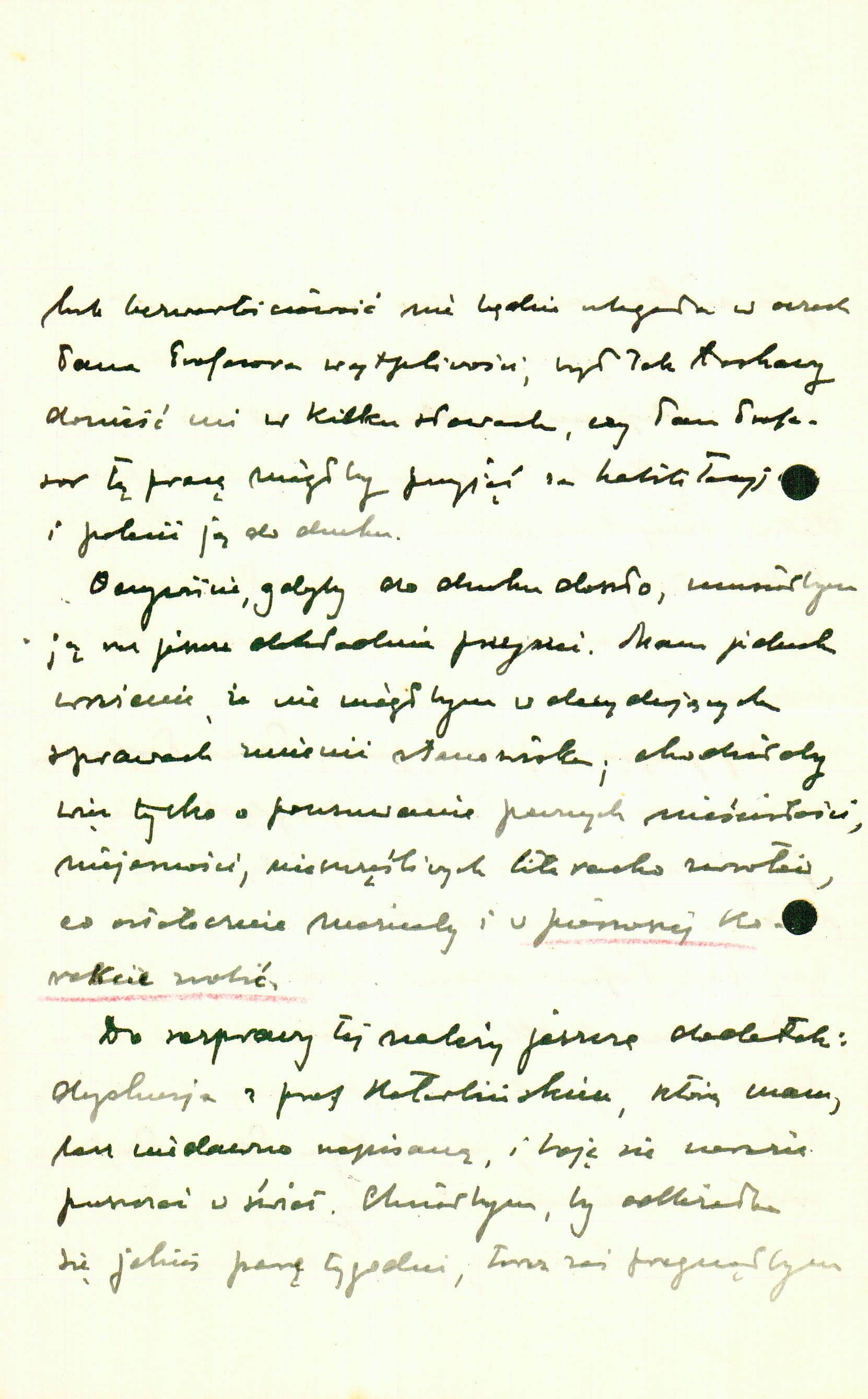 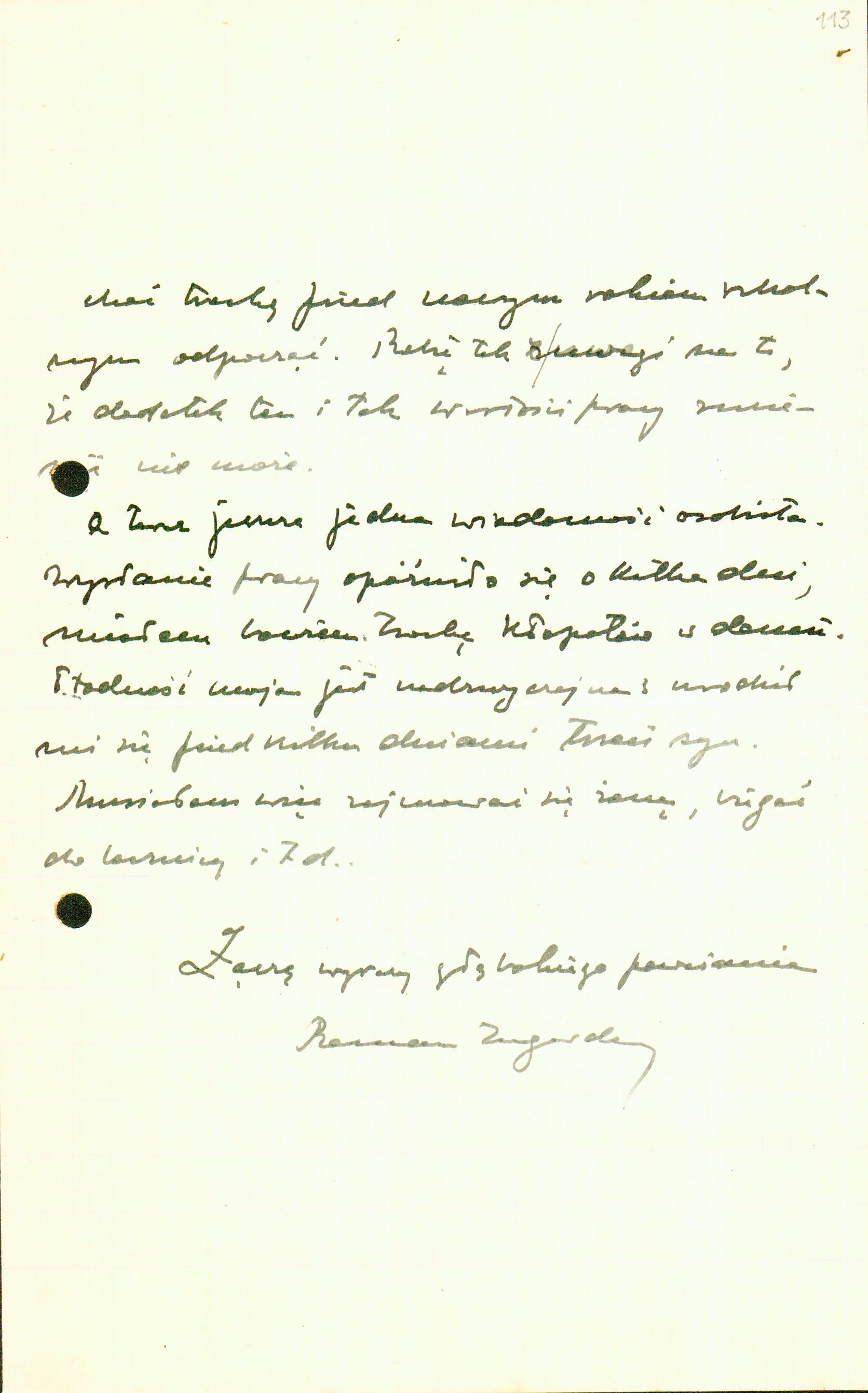 I apologise for not having replied yet to your last letter; I wanted to do so, and even wrote a reply, but then threw it into the wastebasket, because I’d ventured into a long discussion about the multiplicity of languages of German philosophers, and afterwards not all of it pleased me. After that there was no time, because I ended up rushing to transcribe and correct my dissertation.

Now, first and foremost, I hasten to most fervently thank you for graciously addressing yourself to and conducting the nostrification of my doctorate, as well as for kindly trying to obtain a copy of the Ministry document. This copy will surely be completely sufficient. I’m afraid only that my diploma will get lost on its meanderings from Warsaw to Lviv, because it’s surely not even possible to attempt to obtain a duplicate of something like that. I hope, though, that it won’t come to that.

Along with this letter, I’m sending my dissertation ‘On Essential Questions’. I’m sending it with my heart in my mouth: while it encompasses the partial result of several years of work (more or less since autumn 1920, though I’ve dealt with many other things during that period of time!), a great deal more work would need to be done in order for the various issues discussed therein to be shown in a satisfactory manner. It’s just that I have the impression that its central thesis has been elaborated. My fears also stem from the fact that in Poland I can’t count on any sympathy for the general position I occupy. Most likely it’ll be what’s happened here more than once already: a fight not over my own statements, but over the fact that, allegedly, Husserl is speaking through me in everything I say.

I was particularly concerned by the remark in your last letter about ‘incomprehensibility’ and those who have been ‘initiated’. Unfortunately, my dissertation also uses terminology that has not been generally accepted, because wherever I based my writing on things elaborated by other researchers, I felt obliged to preserve their terminology, whereas wherever I elaborated completely new things, I had to forge new terminology. I always tried to explain every important term. Whether I succeeded or not is something I’m not in a position to judge.

My dissertation exhibits other deficiencies as well. It was written nearly without references to the literature. What I could find in my own books or here in Toruń was all. Unfortunately, a leave of absence was denied me, so what was I supposed to do? Borrowing some books for a certain time (even though in this, too, I was met with a refusal from the University of Warsaw Library!) doesn’t solve anything. It’s necessary to sit, even for a month, in the library and search. Therefore I don’t know what others may think of the issues I’m dealing with. Perhaps I’ve made more than one assertion that’s been made before, having arrived at it independently. I don’t know. I think, however, that the trail I’ve blazed is a new one.

My greatest fear, however, concerns what you think about my concept of the ‘idea’, which is completely new and perhaps, or even certainly, conceals more than one weak aspect. It doesn’t seem to me that I’m mistaken, though; at most, what I’m presenting needs to be supplemented by continued study devoted particularly to these ideas. I’m also very curious about what you’ll say about my delineation of the essence of an individual object, etc.

In sending you this paper, I ask you as politely as possible for a gracious review prior to printing. In any case – as I understand it – it’ll see the light of day only after you’ve given it a positive evaluation.

Since the matter is important to me – because ultimately it’ll determine whether I’ll ever get out of Toruń ‒ I’d be extremely grateful to you if, once you have no doubt regarding its significant value or worthlessness, you’d be so gracious as to inform me in a few words whether or not you’re able to accept this work for habilitation and recommend it for publication.

Of course, if it comes to printing, I’ll have to review it again. However, I don’t believe I’d be able to change my position on decisive issues; thus it’d be a question only of removing certain inaccuracies, ambiguities, and unfortunate literary phrases, which ultimately could also be done in the second round of proofs.

The following addendum is still needed for the dissertation: the discussion with Prof. Kotarbiński, which I have, although it was written recently and I’m afraid to let it see the light of day. I’d like to put it aside for a couple of weeks; now, I want to rest at least a bit before the new school year. I’m doing this with the idea in mind that this addendum won’t change the value of the paper in any case.

And now one more bit of personal news. Sending the paper was delayed by a few days, because I had some problems at home. My hardship is an extraordinary one: a few days ago, my third son was born. So I had to take care of my wife, run to the clinic, etc.