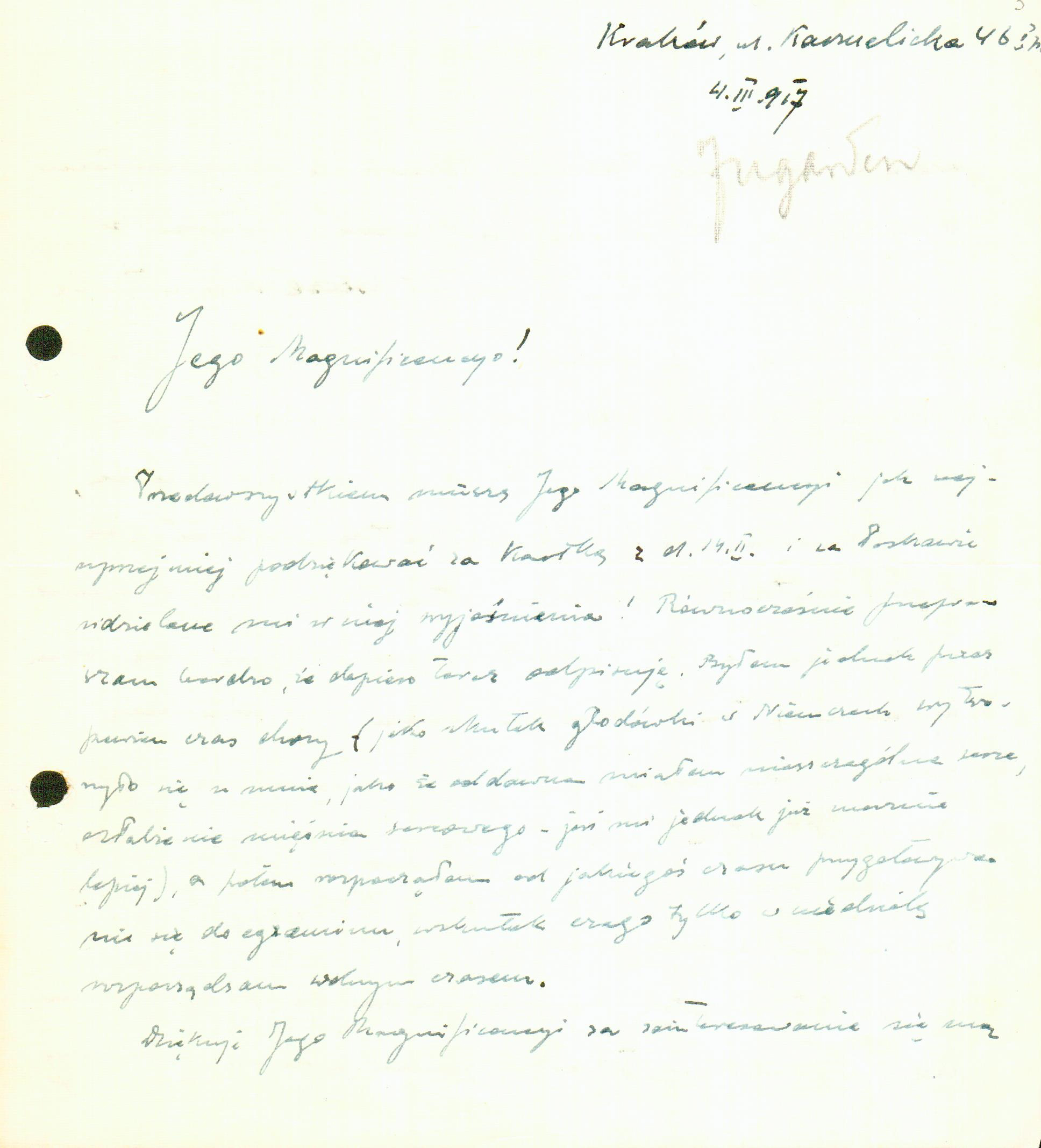 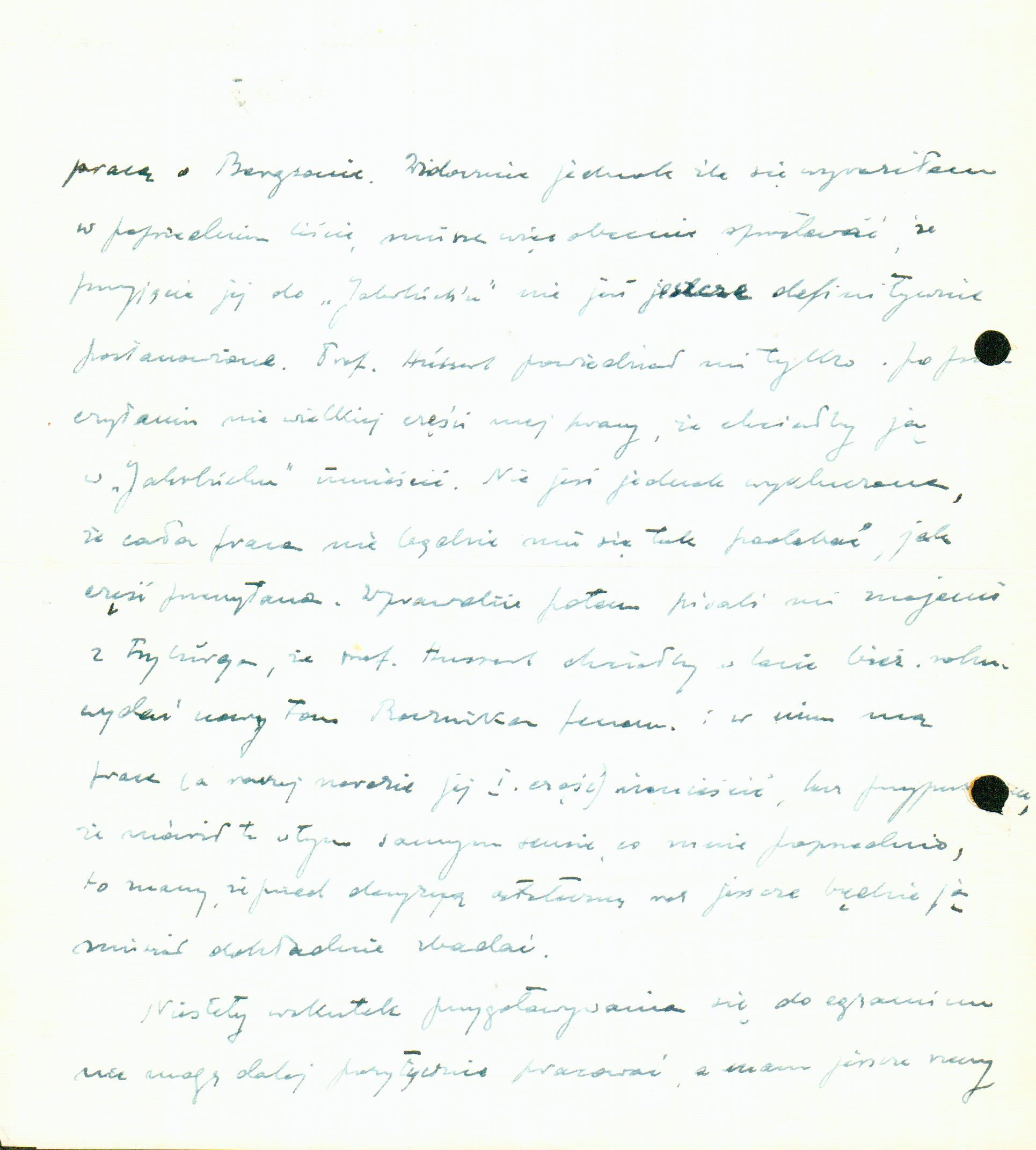 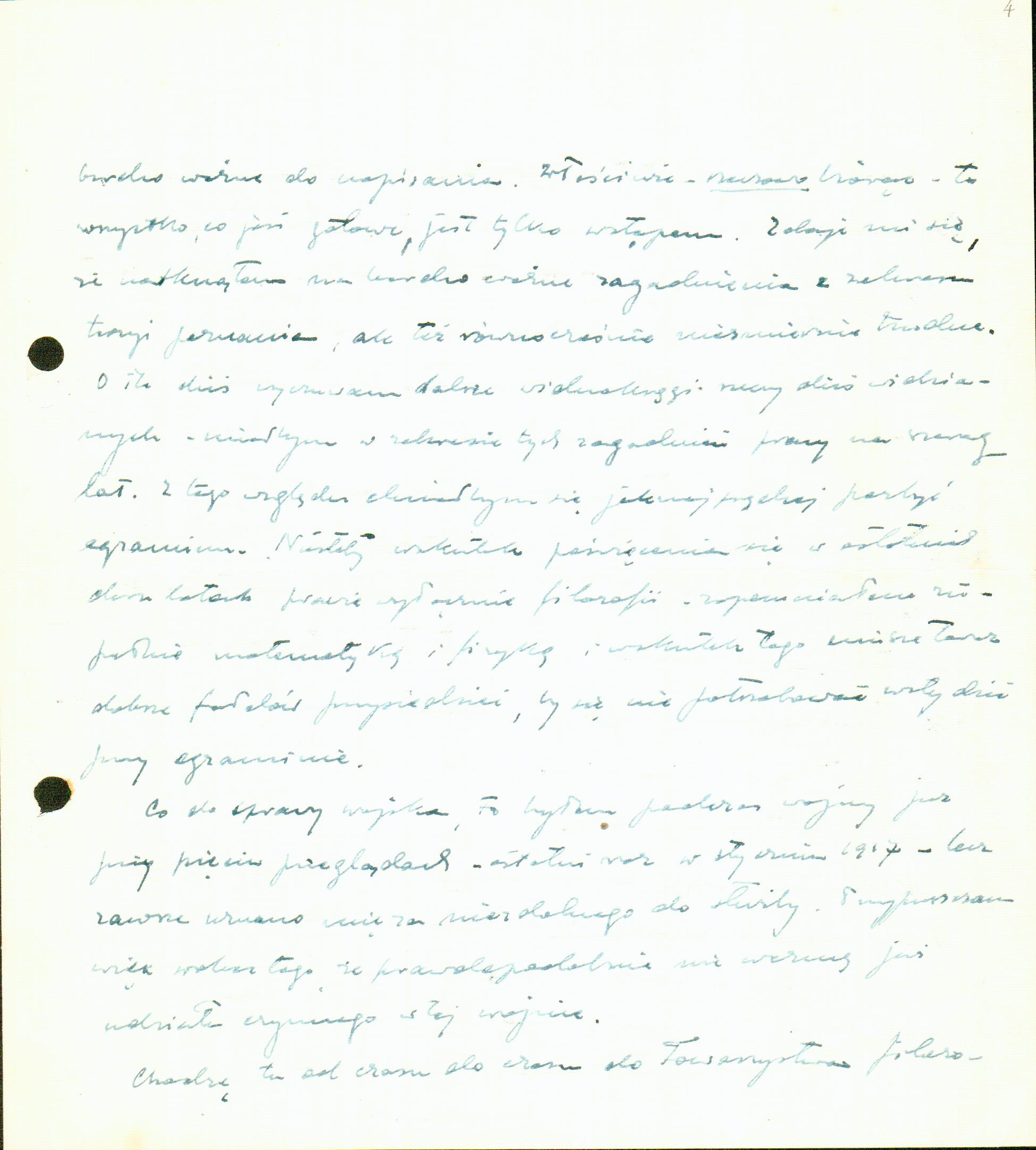 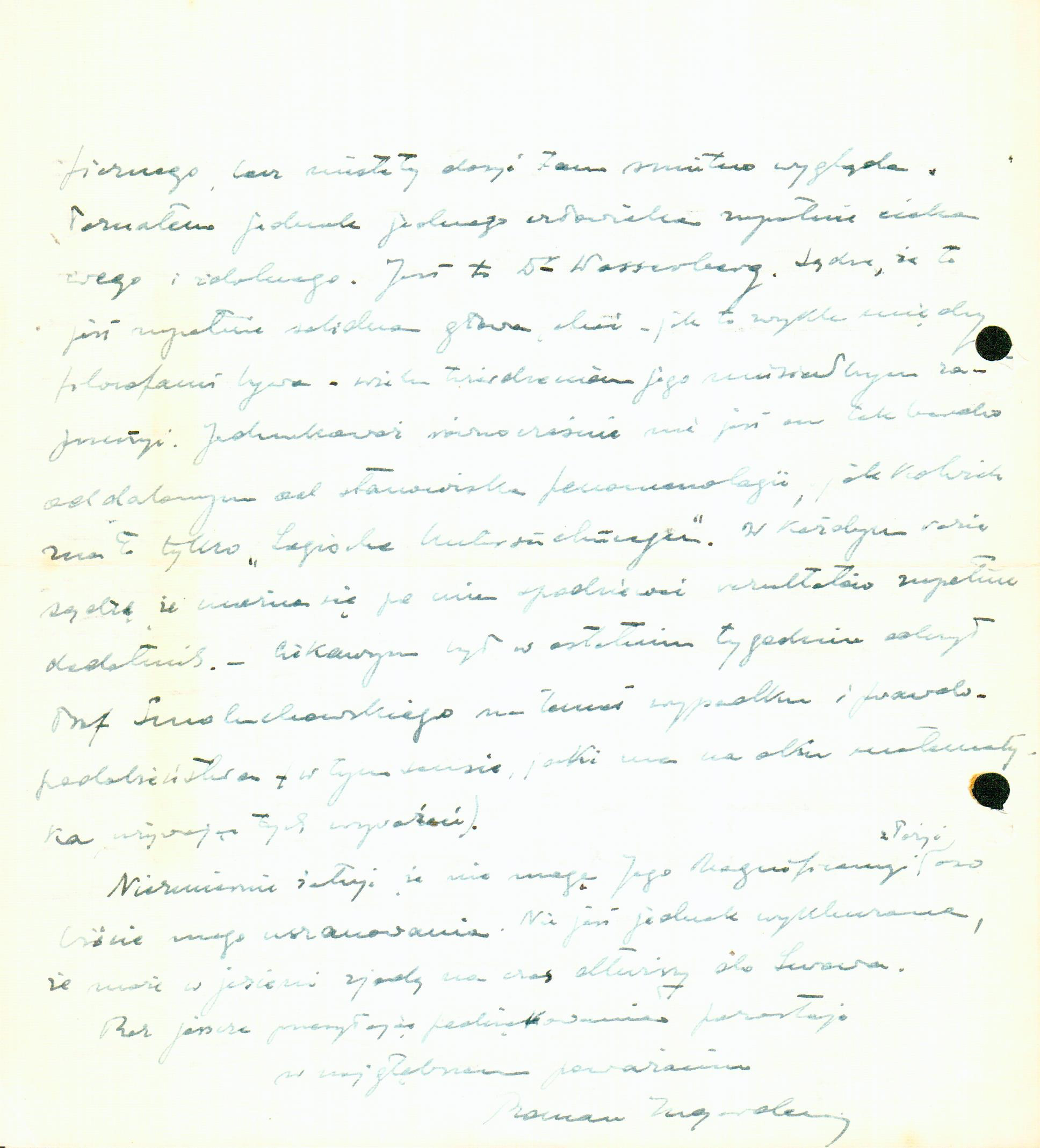 First of all I have to thank Your Magnificence most kindly for Your card of 14/2 and for the clarifications graciously shared with me! At the same time, I’m very sorry for writing back only now. However, I was ill for some time (as a result of the hunger strike in Germany, and in light of the fact that my heart hasn’t been in very good shape for a long time, I developed a myocardial weakness ‒ I’m already much better, though), and then some time ago I started preparing for the exam, as a result of which I have free time only on Sundays.

I thank Your Magnificence for Your interest in my paper on Bergson. Apparently, though, I expressed myself badly in my previous letter; therefore, I now must clarify that its acceptance for Jahrbuch [German: Yearbook] has not yet been definitively decided. Professor Husserl, after reading a small part of my paper, told me only that he wished to find a place for it in Jahrbuch. However, it’s not out of the question that the entire paper will not please him as much as the part he read. It’s true that my friends from Freiburg later wrote to me that Prof. Husserl would like to issue a new volume of the Phenomological Yearbook in summer of this year and to find a place in it for my paper (or rather, as of now, Part I), but I suppose he said this in the same sense I indicated before, i.e. that before the final decision he would have to study it thoroughly once again.

Unfortunately, as a result of preparing for the exam, I cannot continue to work productively, though I still have very important things to write. In fact, objectively speaking, everything that’s been prepared constitutes an introduction only. It seems to me that I’ve come across issues in the field of the theory of cognition that are very important but at the same time extremely difficult. Although I can sense promising prospects for things perceived today, I’d have to work on these issues for a number of years. Thus I’d like to put the examination behind me as soon as possible. Unfortunately, as a result of devoting myself over the past two years almost exclusively to philosophy, I’ve forgotten all about mathematics and physics, and as a result I now need to burn the midnight oil so I won’t disgrace myself in the examination.

As for the question of the army, during the war I was present at five inspections ‒ the last in January 1917 ‒ but was always considered unfit for service. I suppose, in view of this, that I probably won’t take an active part in this war.

I go to the Philosophical Society here from time to time, but unfortunately things there look rather sad. However, I’ve met one very interesting and capable person: Dr Wasserberg[O1] . I think he’s got a very good head on his shoulders, even if ‒ as usually happens among philosophers ‒ I have to deny many of his assertions. At the same time, however, he is not so very far removed from the position of phenomenology, although he was familiar only with Logische Untersuchungen [Logical Investigations (Husserl)]. In any case, I think that completely positive results can be expected from him. ‒ Prof. Smoluchowski[O2] ’s lecture last week, on the subject of accident and probability (in the mathematical sense, if I may put it that way), was interesting.

I’m very sorry that I cannot pay my respects to Your Magnificence in person. It isn’t out of the question, however, that I might come to Lviv for a longer stay in autumn.

Once again sending my thanks, I remain, with the most profound esteem

Letter to the Committee of the Library of Classics of Philosophy written 04.11.1952

Letter from Władysław Witwicki, n/d A