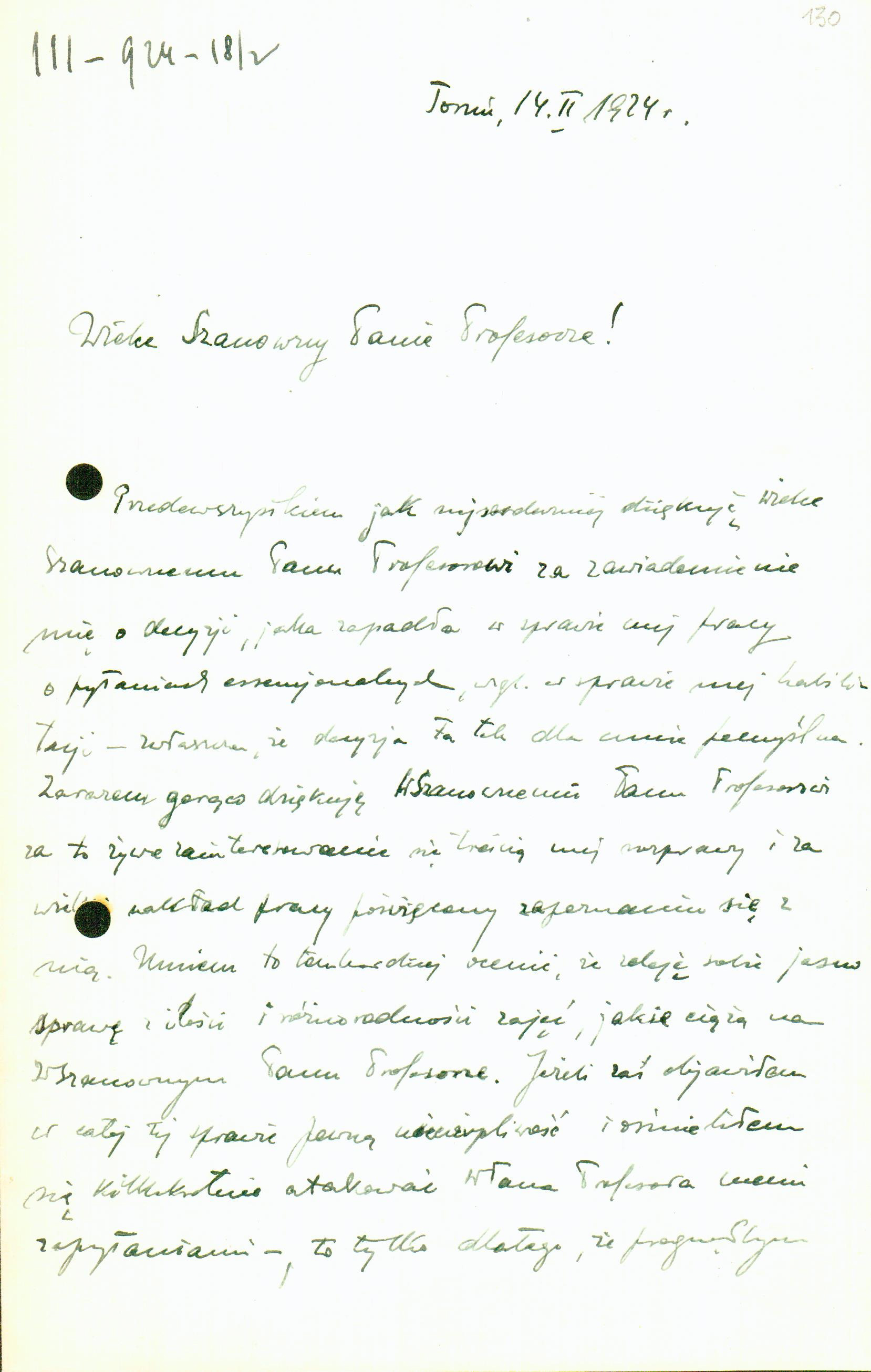 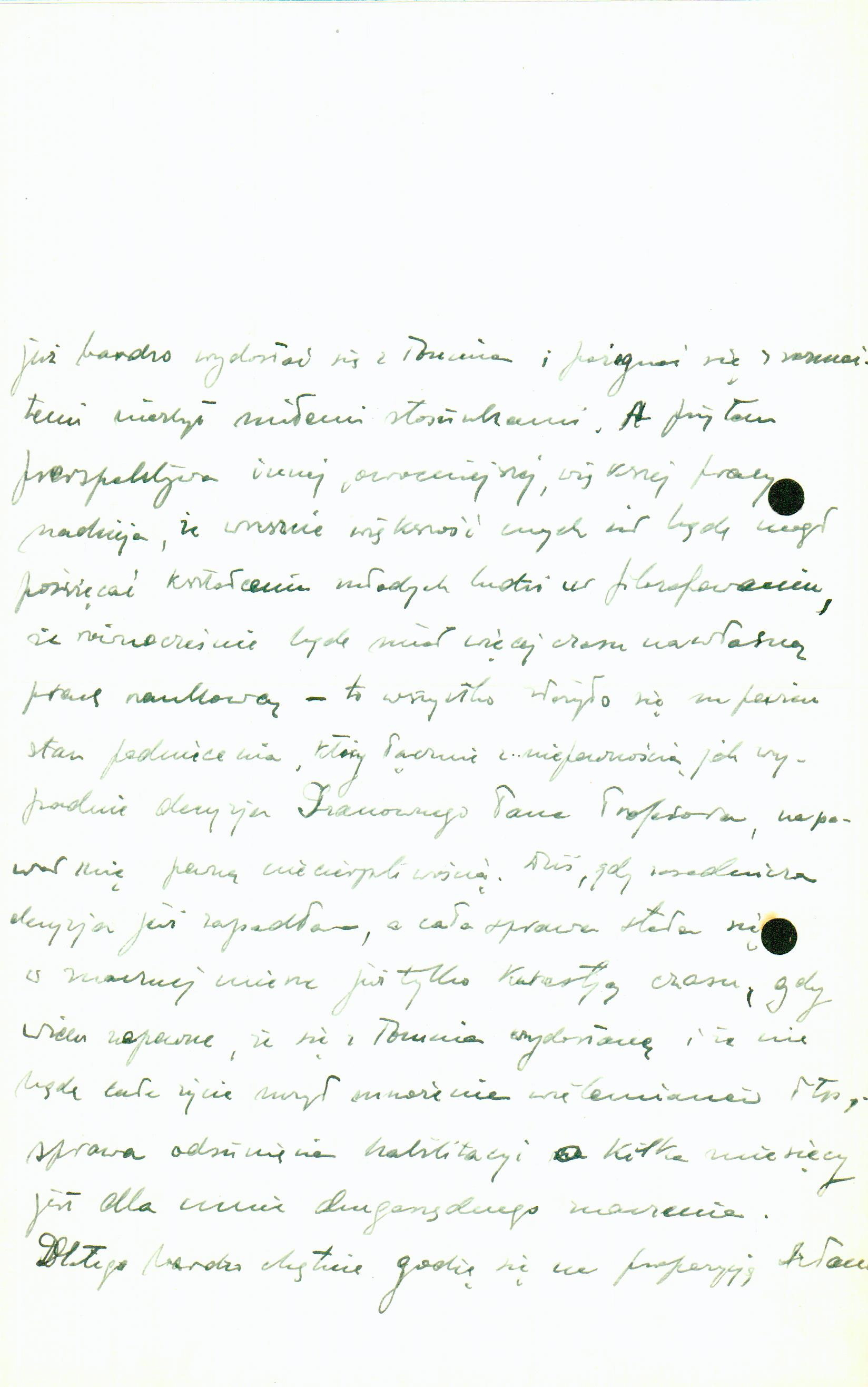 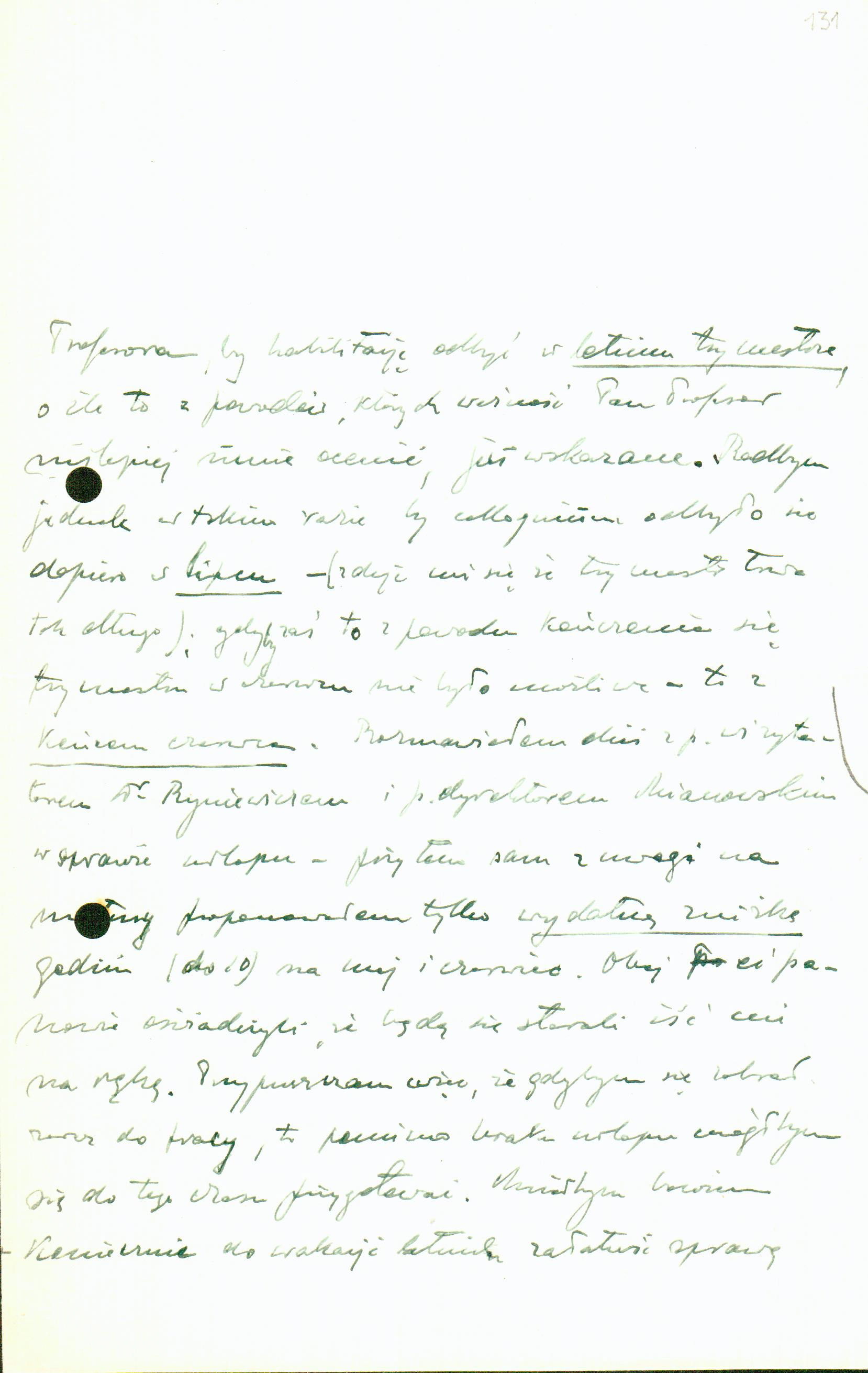 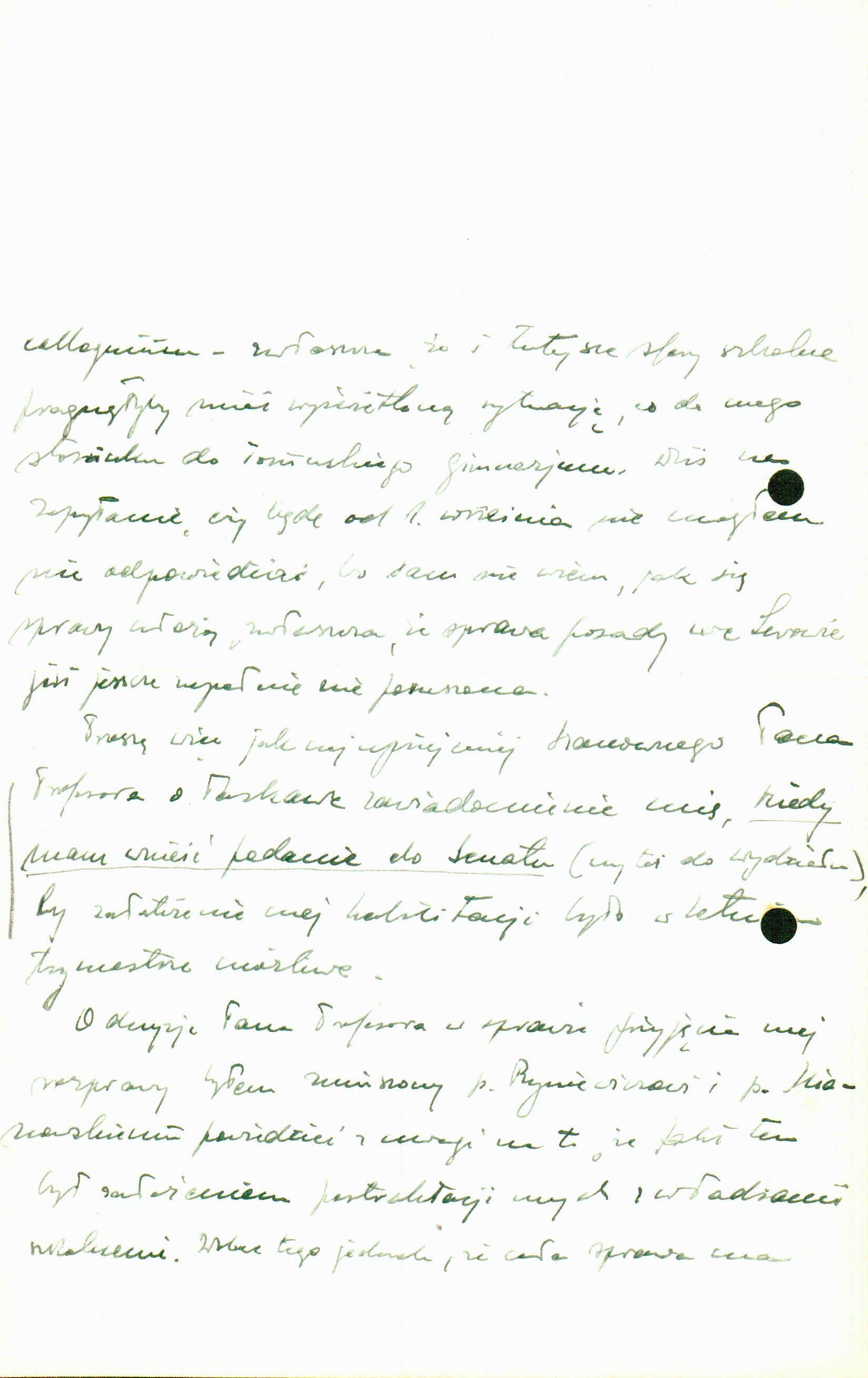 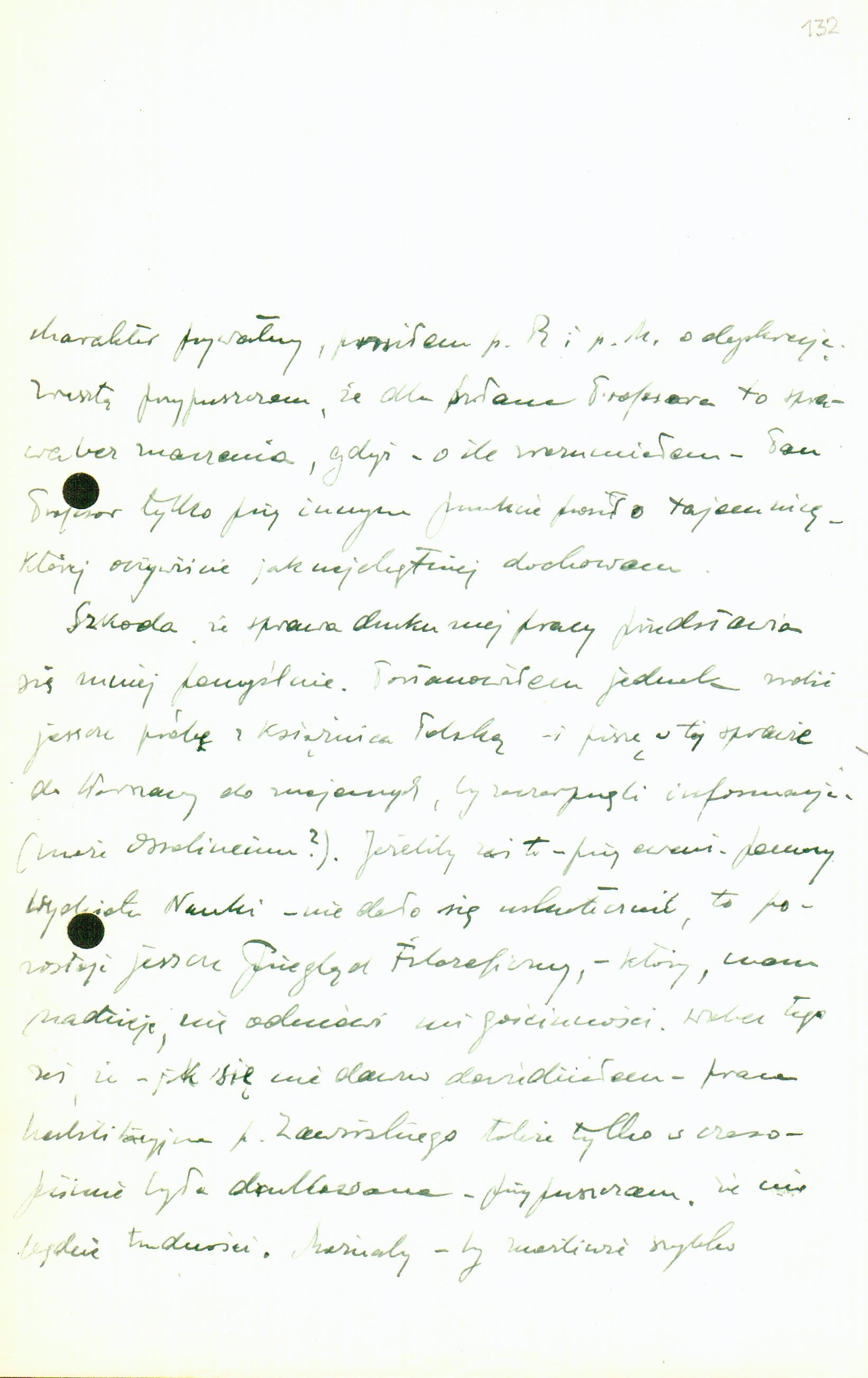 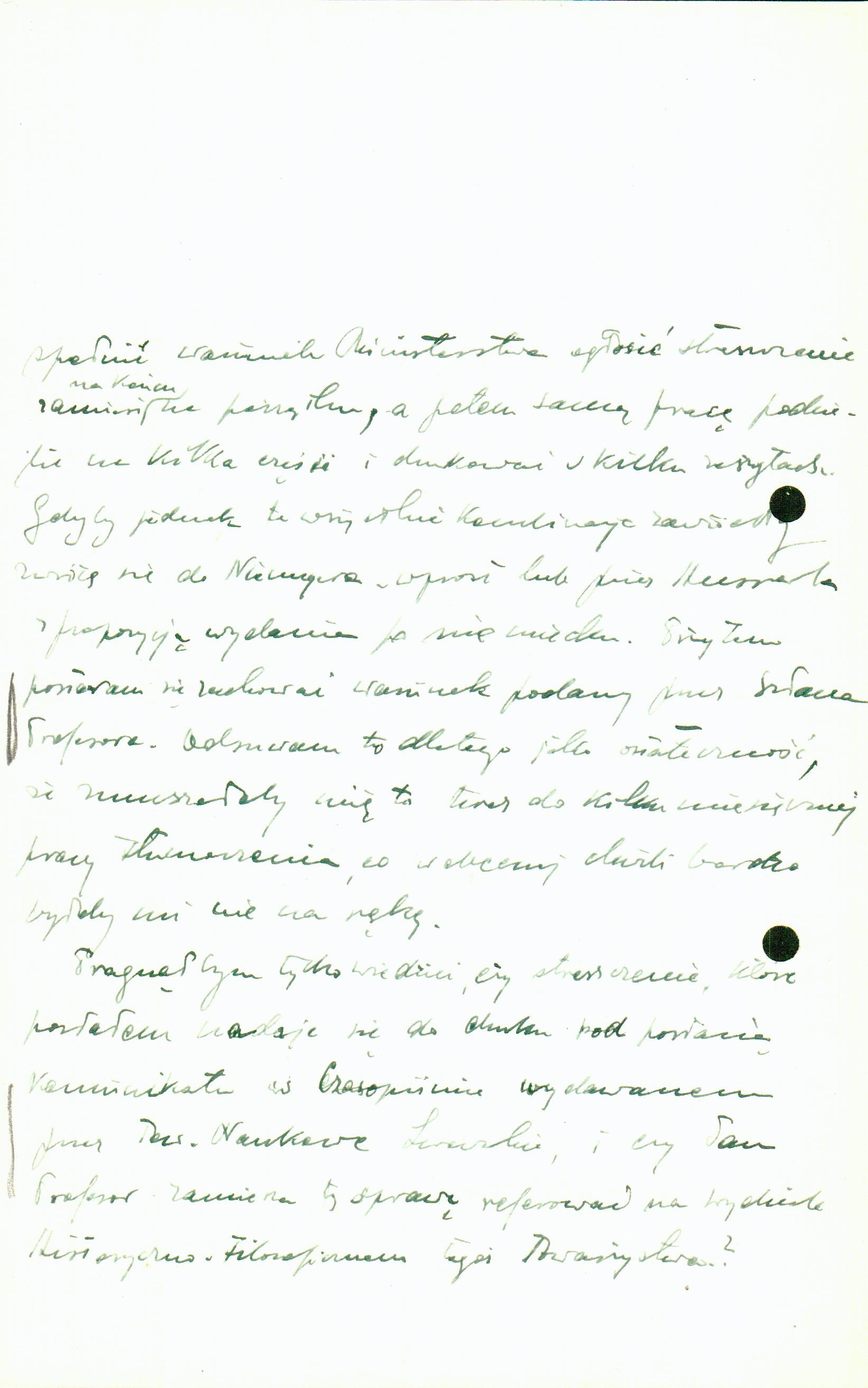 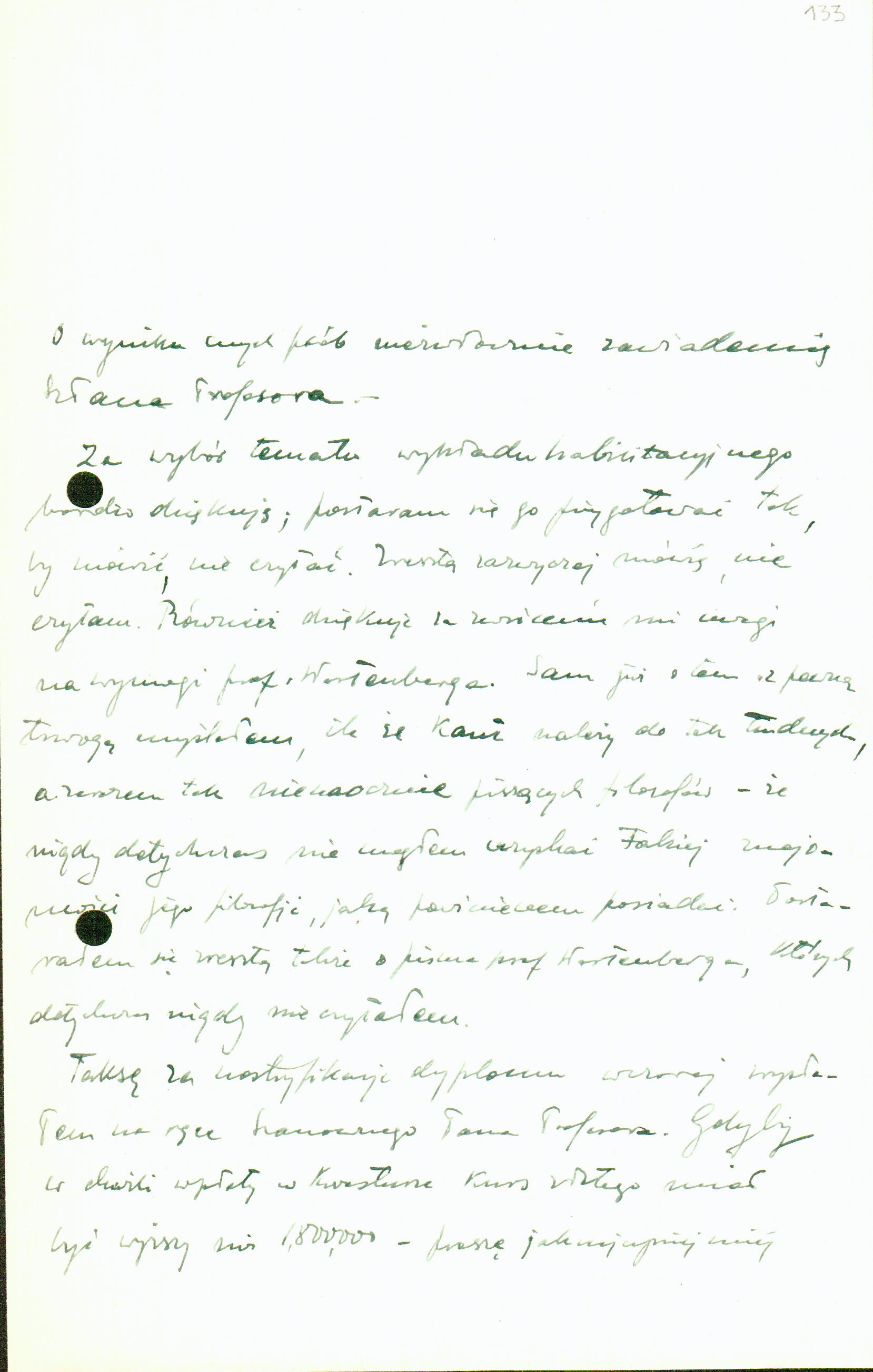 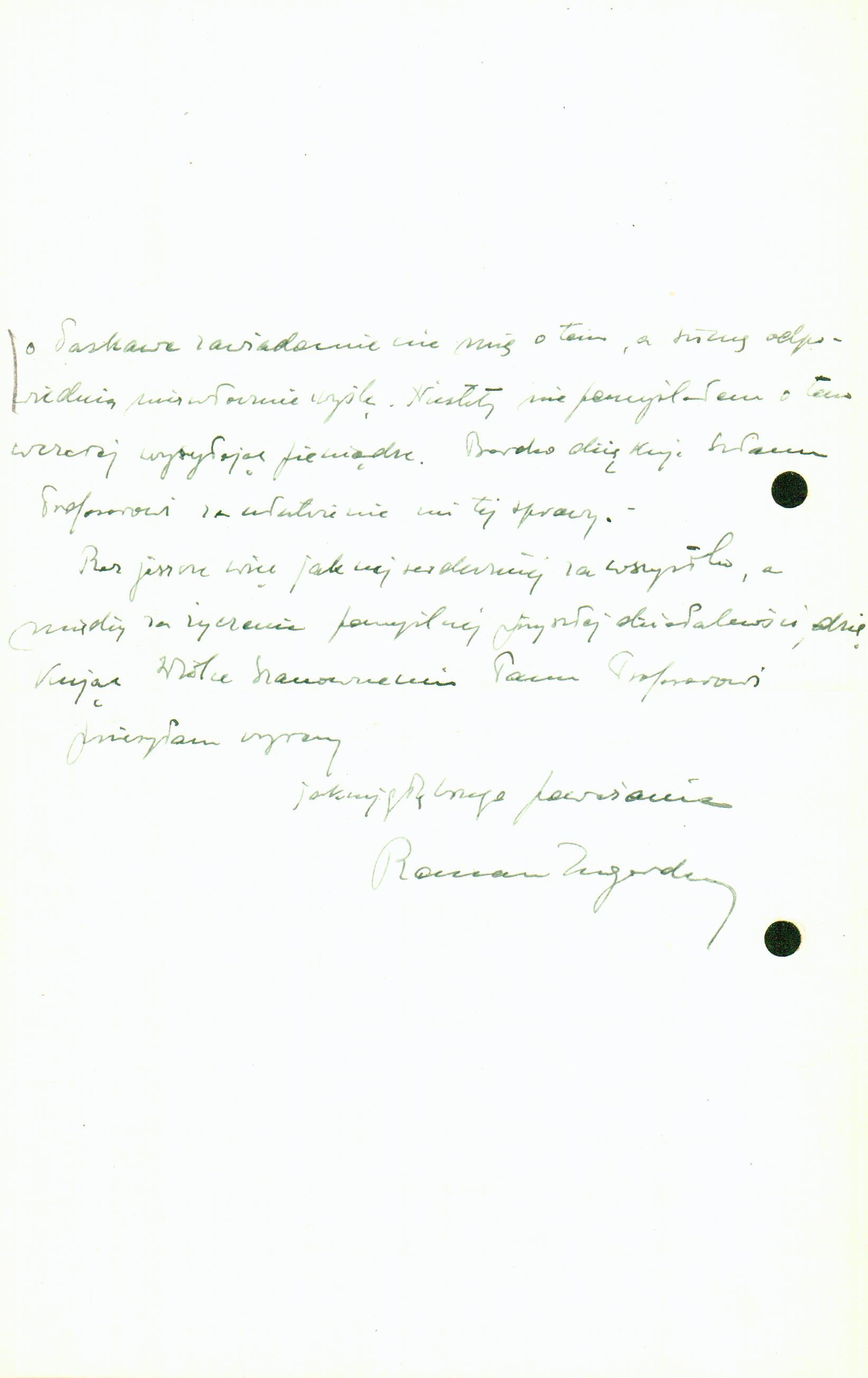 First of all, I thank you most cordially for informing me about the result of your decision regarding my paper on essential questions, i.e. in the matter of my habilitation ‒ especially since this decision is so favourable for me. At the same time, I fervently thank you for your keen interest in the contents of my dissertation and for the great amount of work you’ve devoted to becoming acquainted with it. I can appreciate this all the more, as I clearly realise the number and variety of activities with which you’re burdened. If I’ve revealed a certain impatience throughout this business and have taken the liberty to repeatedly bombard you with my queries, it’s only because I want very badly to get out of Toruń and say goodbye to an assortment of not overly pleasant relationships. And at the same time the prospect of different, greater and more fruitful work, the hope that finally I’ll be able to devote most of my efforts to educating young people in philosophising, that at the same time I’ll have more time for my own original philosophical work ‒ all of these things contributed to a certain state of excitement, which, along with the uncertainty as to the result of your decision, filled me with impatience. Today, now that the basic decision has been made, and the whole thing has become, in great measure, only a matter of time, now that I know for sure that I’m going to get out of Toruń and won’t spend my whole life teaching the multiplication of polynomials, etc. – the question of postponing my habilitation for a few months is of secondary importance to me.

Therefore I very willingly agree to your proposal to conduct the habilitation process during the summer trimester, if this is advisable for reasons of which you are the best judge. In that case, however, I’d be gratified if the colloquium were not to take place until July (it seems to me that the trimester runs until then); if this is not possible due to the trimester ending in June, then at end of June. I spoke today with Dr Ryniewicz[O1] , the inspector, and Mr Mianowski[O2] , the headmaster, concerning the subject of my leave – in the course of which I myself, with a view to the matura[O3] , proposed only a significant reduction in hours (up to 20) for May and June. Both of these gentlemen declared that they’d try to accommodate me. I suppose, then, if I were to set to work immediately, I might, despite not having any leave, be prepared by that time. I’d like to definitely arrange the colloquium for the summer holidays – especially since the local school circles would like to have the situation clarified regarding my relationship to the Toruń middle school. Today, asked whether I’ll be here as of 1 September, I was unable to answer, since I don’t know myself how these matters are going to be arranged, especially given that the question of a position in Lviv has not been raised at all yet.

I politely ask you, then, to graciously inform me as to when I’m supposed to submit an application to the Senate (or to the Faculty) to schedule my habilitation during the summer trimester.

I was obliged to tell Mr Ryniewicz and Mr Mianowski about your decision regarding the acceptance of my dissertation, since this was the basis of my negotiations with the school authorities. However, in view of the private nature of the entire matter, I asked Mr R and Mr M to exercise discretion. Anyway, I don’t suppose this is important to you, since ‒ as I understand it ‒ it was only at a previous juncture that you asked me to keep the matter confidential – which, of course, I did most willingly.

It’s too bad that the issue of printing my work appears less favourable. However, I’ve decided to make another attempt with Książnica Polska [Polish Library] – and am writing to acquaintances in Warsaw concerning this matter in order to obtain information (maybe Ossolineum?). If, however, this – with the possible help of the Scientific Department – does not succeed, there’s still Philosophical Review – which, I hope, will not refuse me its hospitality. Therefore, since – as I learned not long ago – Mr Zawirski[O4] ’s habilitation thesis was printed only in this journal, I don’t suppose there will be any difficulty. Perhaps – in order to meet the requirement of the Ministry as soon as possible ‒ the summary could be published at the beginning instead of the end, and then the paper itself could be divided into several parts and printed in several issues. But if all these schemes fail, I’ll turn to Niemeyer, directly or through Husserl, with a proposal to publish it in German. At the same time I’m trying to honour the condition you set. I’m considering this as a last resort, because it would force me to undertake several months of translation work, which at this moment wouldn’t suit me at all.

I’d like to know only whether the summary I sent might lend itself to being printed in the form of an announcement in the Journal published by the Lviv Scientific Soc., and whether you intend to refer this matter to the Historical-Philosophical Department of the Society.

I’ll inform you immediately about the outcome of my efforts.

Thank you very much for the choice of topic for my habilitation lecture; I’ll try to prepare it so as to speak rather than read. Anyway, I usually speak, rather than reading. I thank you as well for calling my attention to Prof. Wartenberg’s requirements. I’d already thought about this myself, with some trepidation, since Kant is one of those philosophers that is so difficult and at the same time obscure that I’ve never been able to acquaint myself with his philosophy to the extent I ought to. I’ve also put some effort into Prof. Wartenberg’s work, which heretofore I’d never read.

Yesterday I sent you the fee for the nostrification of my diploma. If the exchange rate for the zloty is higher than 1,800,000 at the time of payment, please kindly inform me and I’ll send you the sum without delay. Unfortunately I didn’t think about that yesterday while sending the money. Thank you very much for facilitating this matter.

Once again, then, while thanking you most cordially for everything, inter alia for your wishes for success in my future activities, I send expressions of the most profound esteem