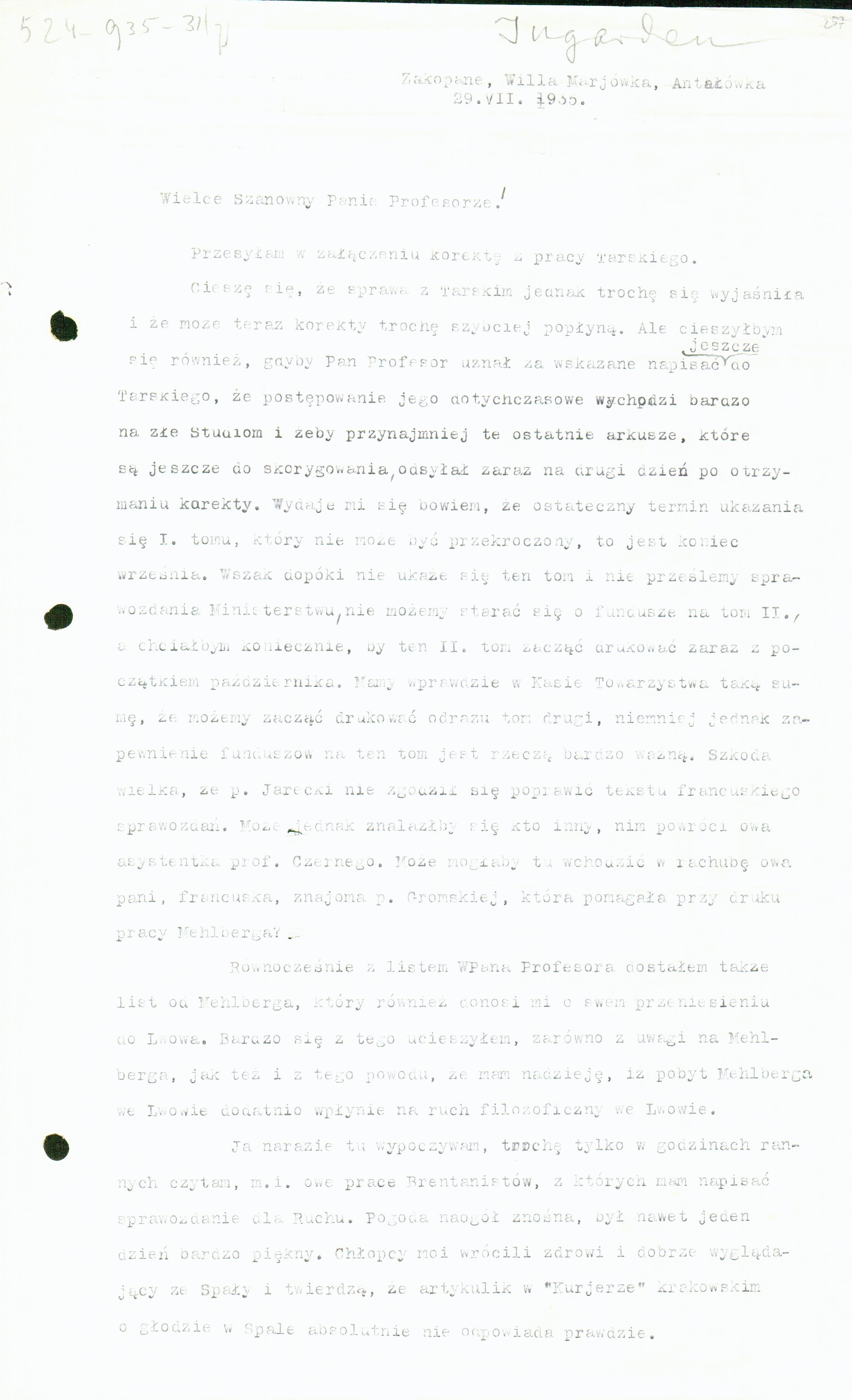 I’m sending the proofs of Tarski[O1] ’s paper in the enclosure.

I’m glad that the issue with Tarski has been clarified a bit and that maybe now the proofs will flow a little faster. But I’d also be glad if you were to consider it advisable to write again to Tarski that his behaviour to date has turned out very badly for Studia [Philosophica] and that he should at least send back the final signatures, which still need to be corrected, immediately on the day after he receives the proofs. Indeed, it seems to me that the final deadline for the publication of Volume I, which can’t be exceeded, is the end of September. After all, until this volume appears and we send the report to the Ministry, we can’t apply for funds for Volume II, and I’d really like to start printing this volume immediately at the beginning of October. We’ve got enough money in the Society Treasury to start printing the second volume immediately; nevertheless, ensuring funds for this volume is a very important matter. It’s a great pity that Mr Jarecki [O2] didn’t agree to correct the French reports. Perhaps, however, someone else can be found before prof. Czerny[O3] ’s assistant returns. Mightn’t that Frenchwoman Ms Gromska [O4] knows, the one who helped with the printing of Mehlberg[O5] ’s paper, enter the picture here?

I received, at the same time as your letter, one from Mehlberg as well, also informing me of his transfer to Lviv. I was very happy about this, both on Mehlberg’s account, and because of my hope that his sojourn in Lviv will have a positive influence on the philosophical movement in Lviv.

I’m resting here at the moment, reading only a little in the morning hours, inter alia those papers of the Brentanists on which I’m supposed to write reports for [Philosophical] Movement. The weather’s bearable overall; there was even one extremely beautiful day. My boys returned from Spała in good health and looking good, and claim that the article in the Cracow Kurjer [Courier] about hunger in Spała doesn’t correspond to the truth at all.

Judging from their good appearance, I have the impression that the Kurjerek [diminutive form of Courier] did indeed go overboard.