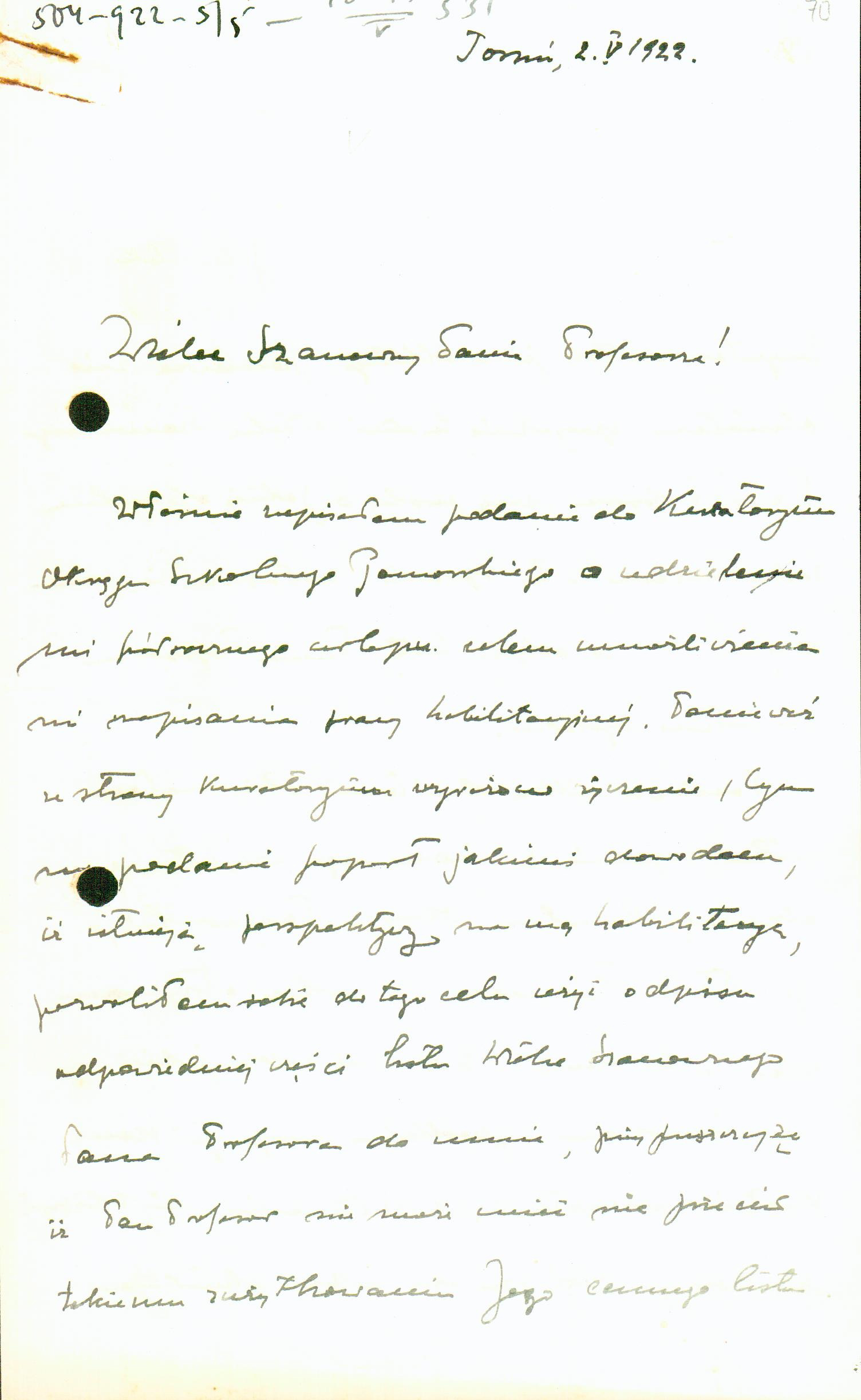 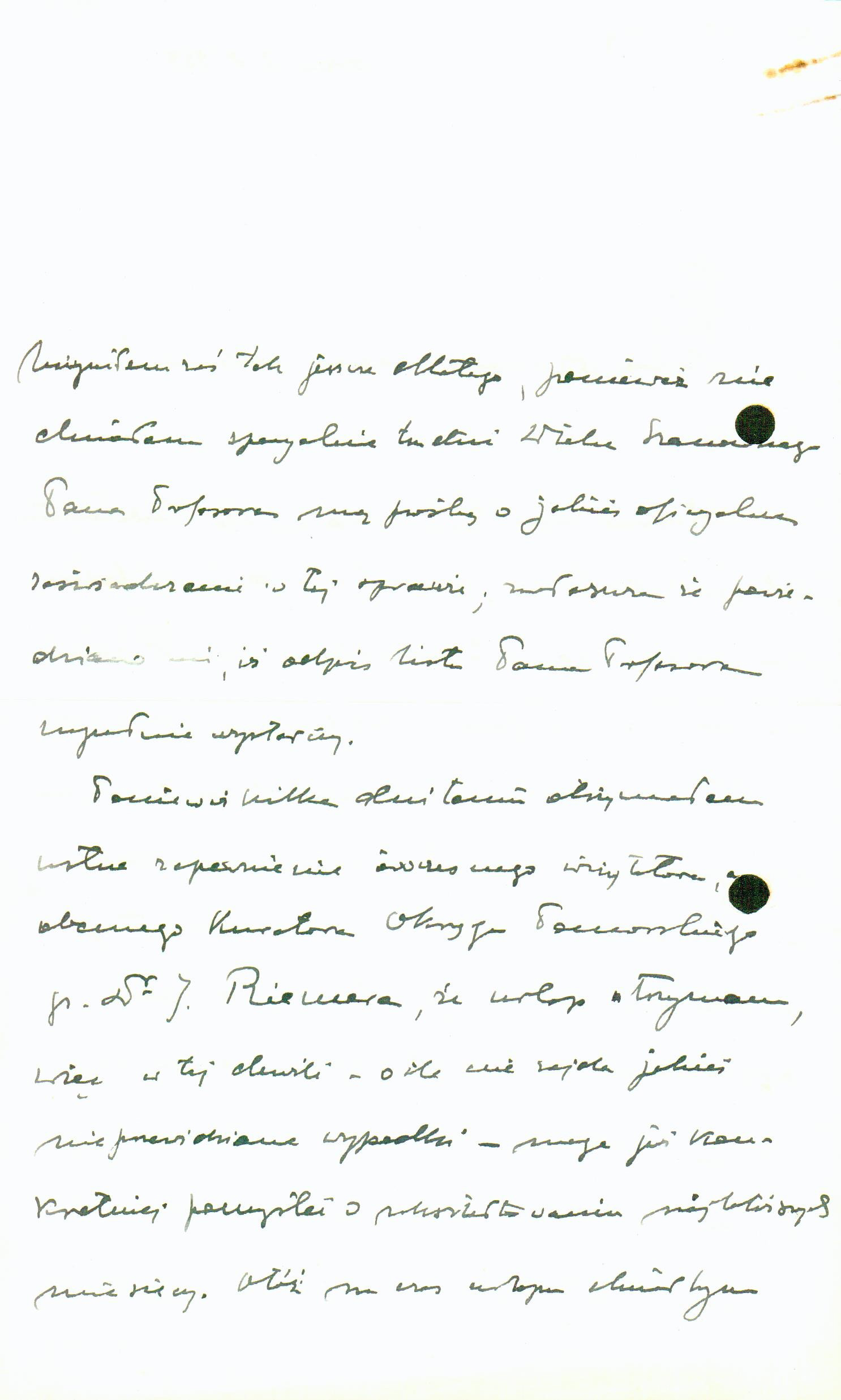 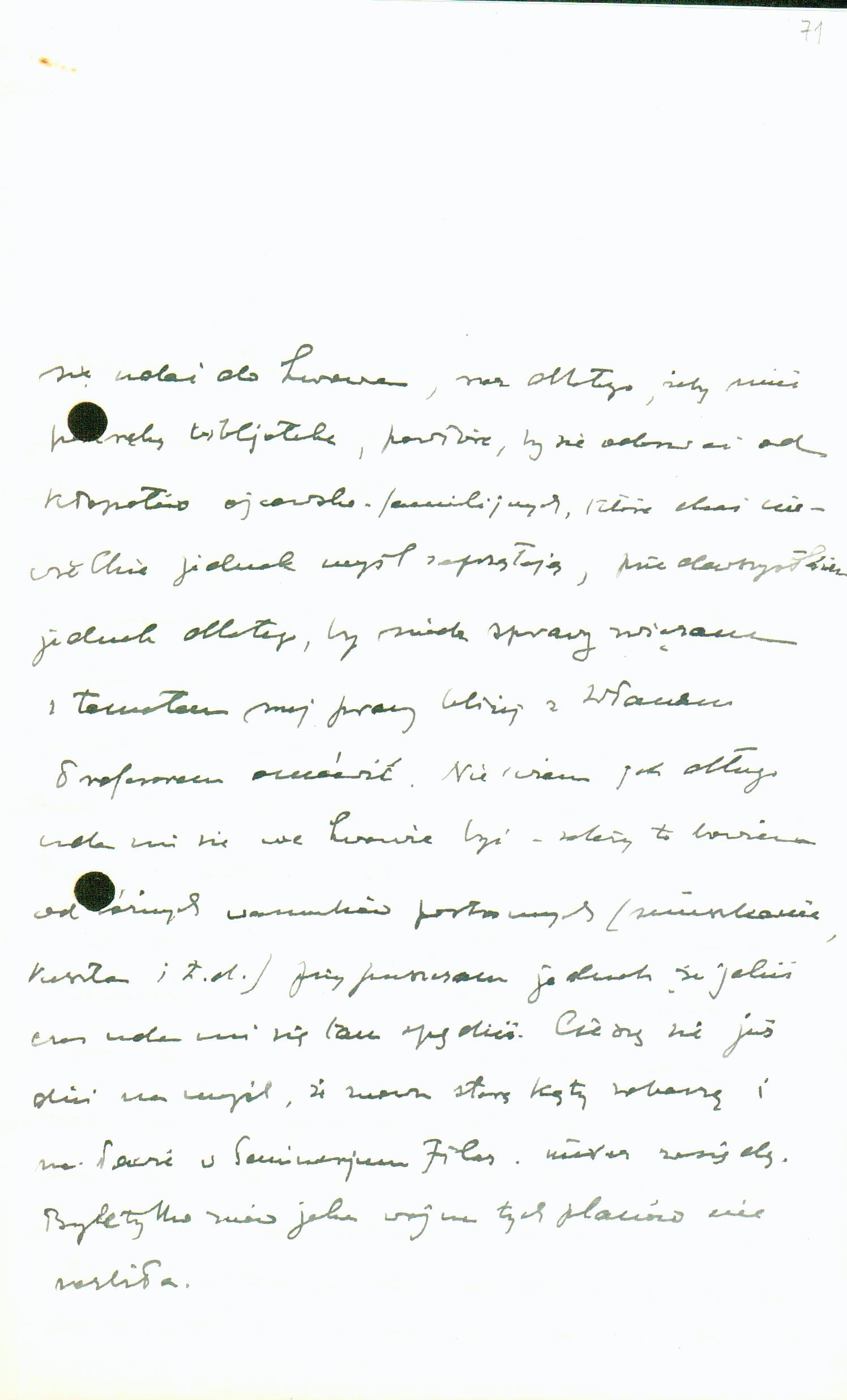 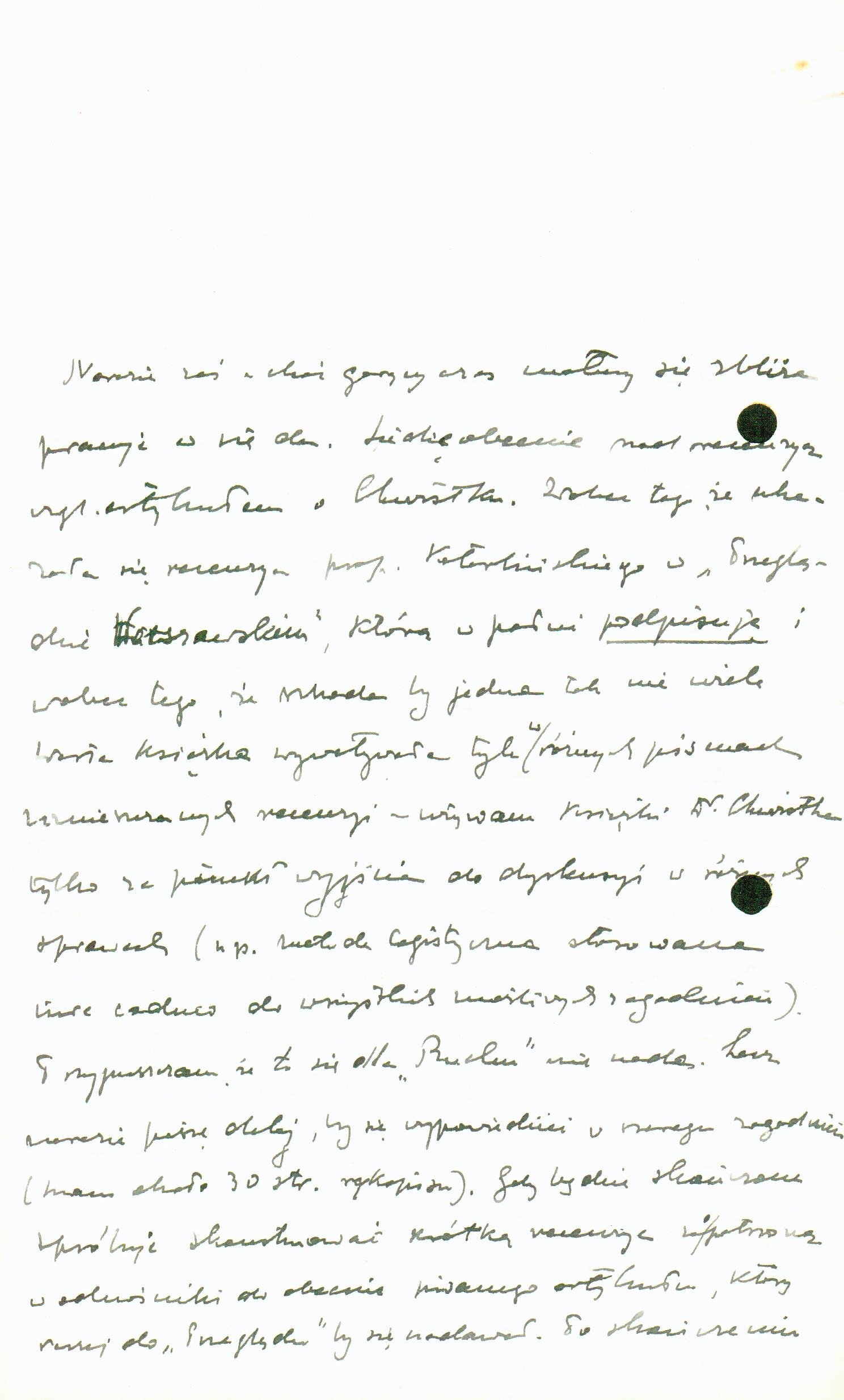 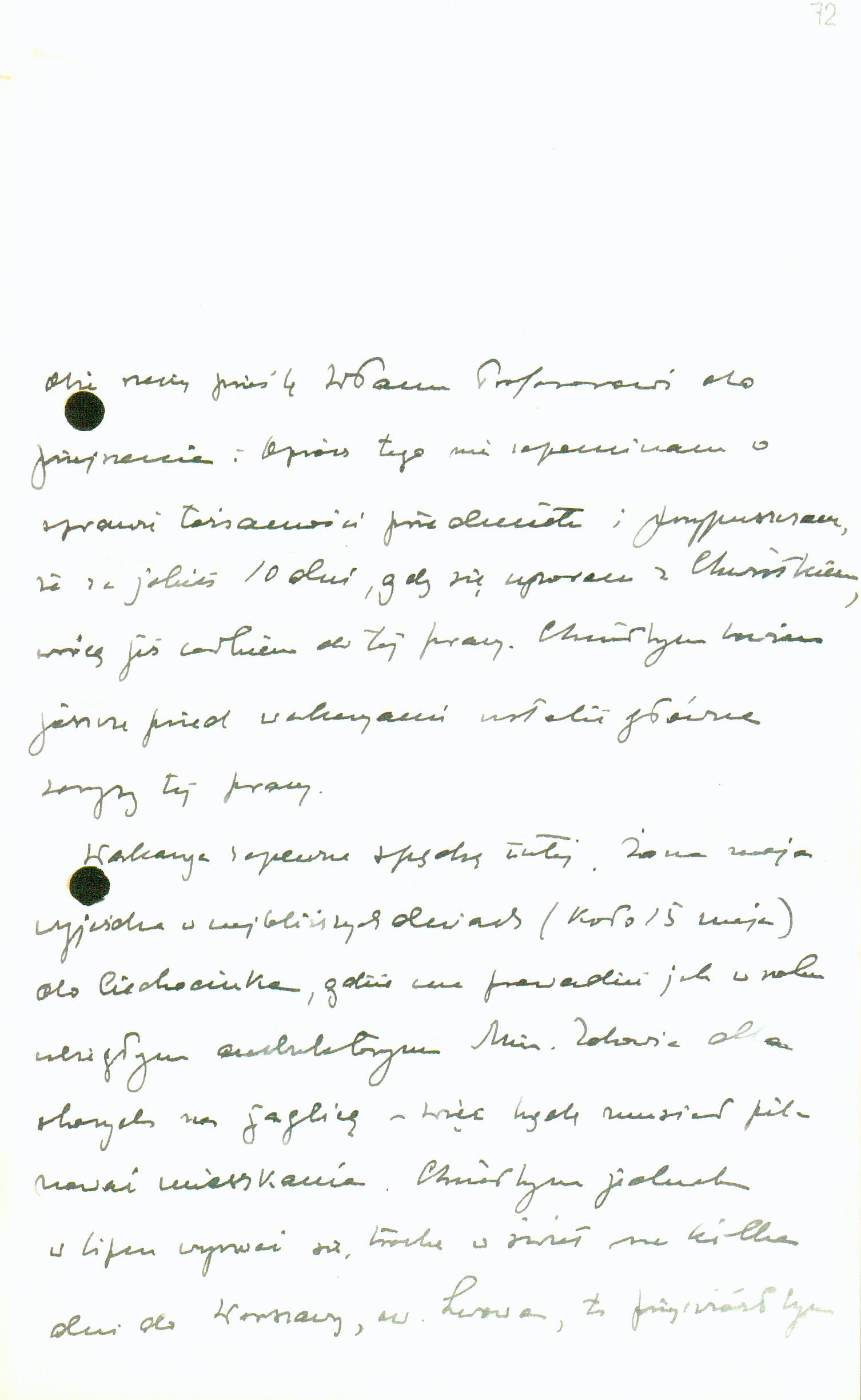 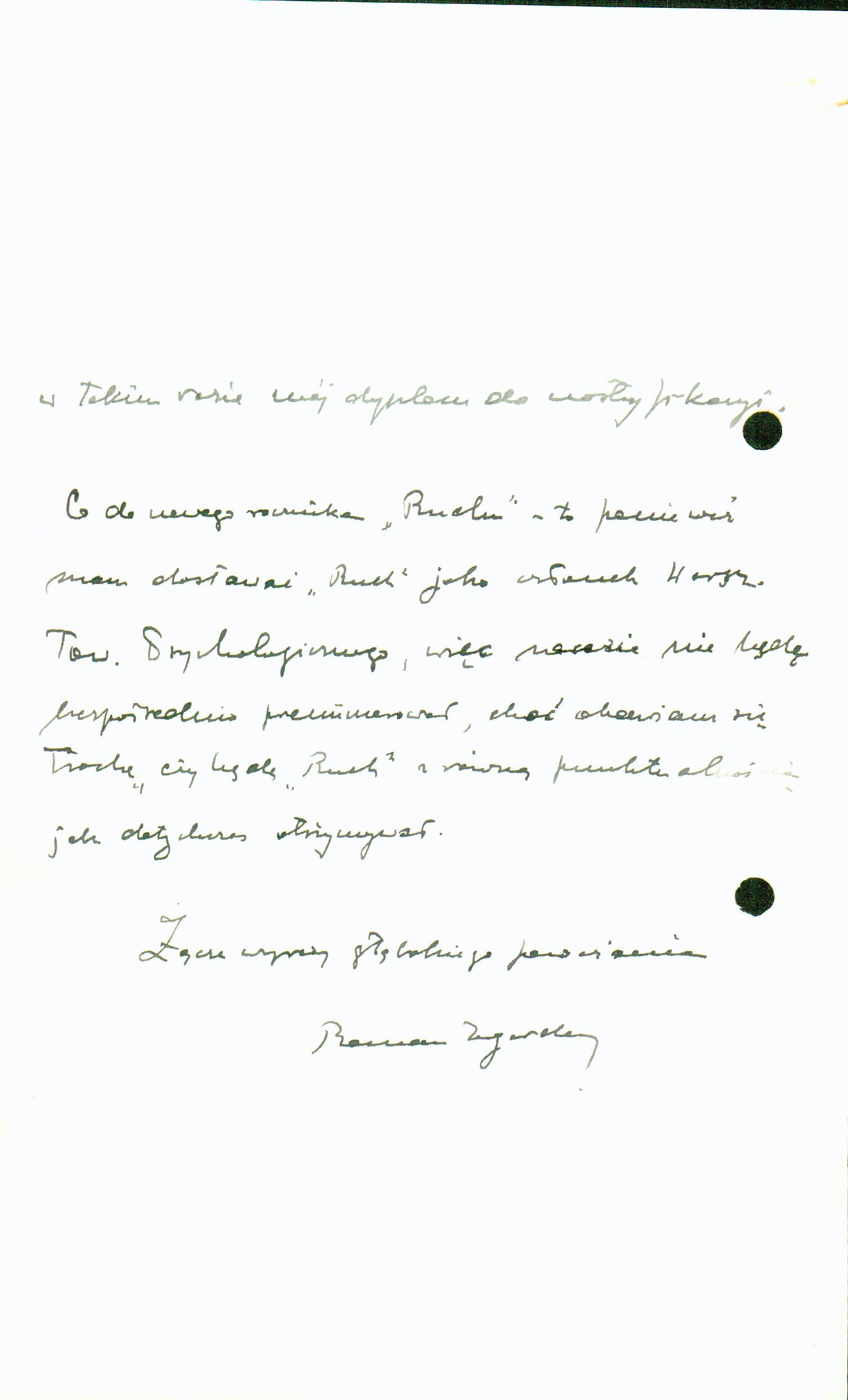 I’ve just written an application to the Board of the Pomeranian School District concerning the granting of a half-year leave to enable me to write my habilitation thesis. Because the Board expressed the wish for me to support my application with some proof that there are prospects for my habilitation, I permitted myself to use a copy of the relevant part of your letter to me, on the assumption that you couldn’t have anything against this use of your valuable letter.

I also did this because I didn’t particularly want to bother you with a request for an official statement in this matter, especially since I was told that a copy of your letter would be completely sufficient.

Since a few days ago I received a verbal assurance from Dr J. Riemer[O1] , then the inspector and currently the Superintendent of the Pomeranian District, that I’ll get the leave, now, barring any unforeseen events, I can think more specifically about the shape of the coming months. Well, for the duration of the holiday I would like to get to Lviv, firstly, to have a library handy, second, to get a break from father-family problems, which, though minor, nevertheless occupy my thoughts, but above all to be able to discuss matters related to the subject of my thesis in more detail with you. I don’t know long I’ll manage to stay in Lviv ‒ that depends on external conditions (lodging, costs, etc.) ‒ but I suppose I’ll manage to spend some time there. Today I’m happy with the idea of seeing the old haunts again and taking a seat on the Philos. Seminarium bench now and then. Once again it’ll be as if the war hadn’t ruined those plans.

For now, though – even though the feverish matura[O2]  season is approaching, I’m working on whatever I can. I’m occupied now with the review of (or article on) Chwistek. In view of the fact that Prof. Kotarbiński’s review, which I fully endorse, has appeared in Warsaw Review, and that it would be a shame for one not-very-important book to inspire so many reviews in so many periodicals, I’m using Dr Chwistek’s book only as a starting point for discussions on various matters (e.g. the application of the logistic method to all possible issues). I suppose that it won’t do for [Philosophical] Movement. But as of now I’m continuing to write, in order to comment on a number of issues (I’ve got about 30 manuscript pages). When it’s finished, I’ll try to put together a short review, equipped with references to the article being written now, which would be better suited for Review. Once both things are finished, I’ll send them to you to review. Apart from that, I haven’t forgotten about the issue of the identity of the subject and I suppose that in about 10 days, when I’m done with Chwistek, I’ll return full-time to this paper, because I’d like to establish the main outlines of this work before the summer holiday.

I’ll probably spend the holiday here. In the near future (around 15 May), my wife is going to Ciechocinek, where she’s supposed to run, as she did last year, an ambulatory clinic for the Ministry of Health for trachoma patients – so I’ll have to look after the flat. However, in July I’d like to get out into the world a bit for a few days in Warsaw, and possibly Lviv, in which case I’d bring my diploma for nostrification.

As for the new year of Movement – because I’m supposed to receive Movement as a member of the Warsaw Psychological Society, for now I’m not going to subscribe directly, although I’m a bit worried as to whether I’ll receive Movement as punctually as I have heretofore.