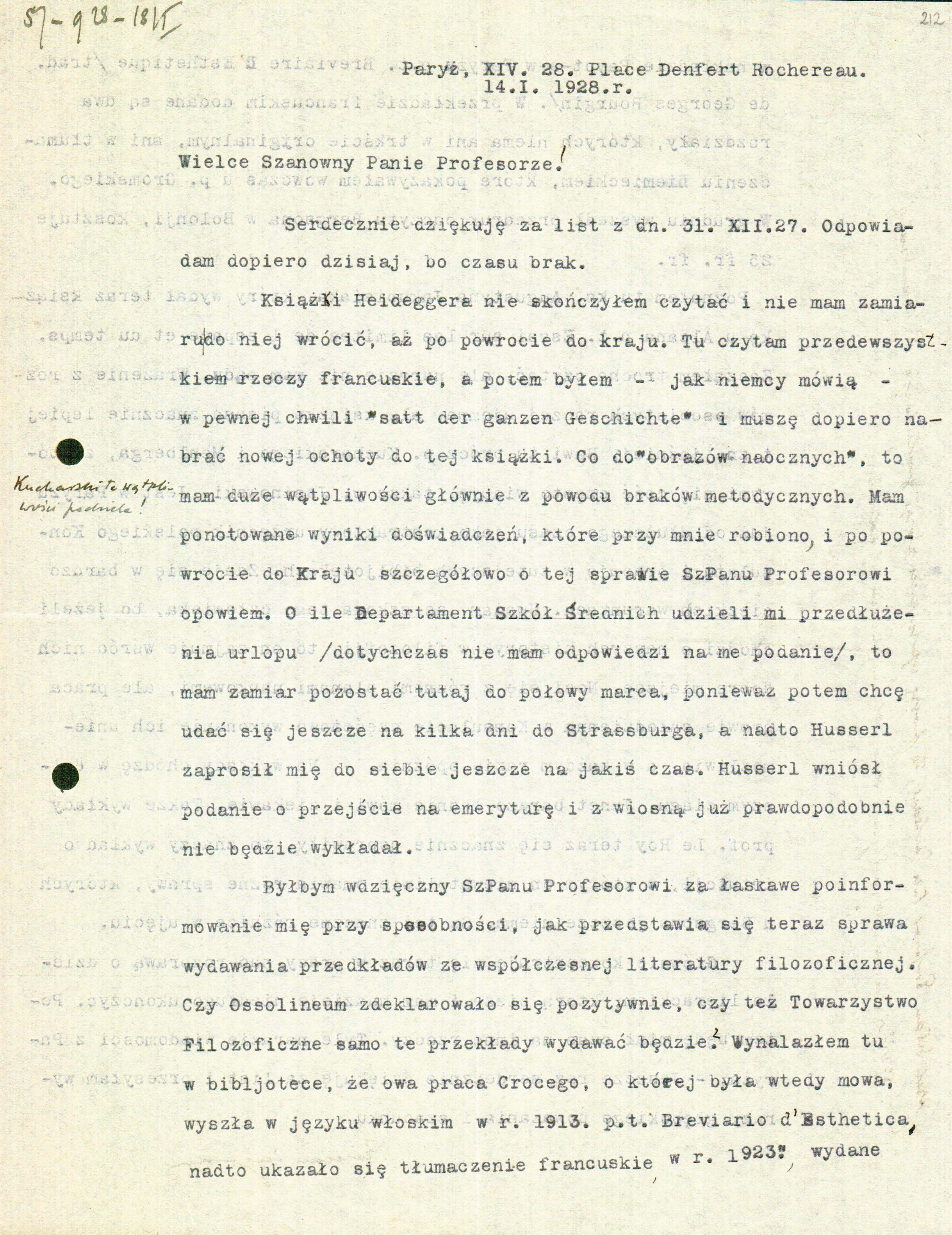 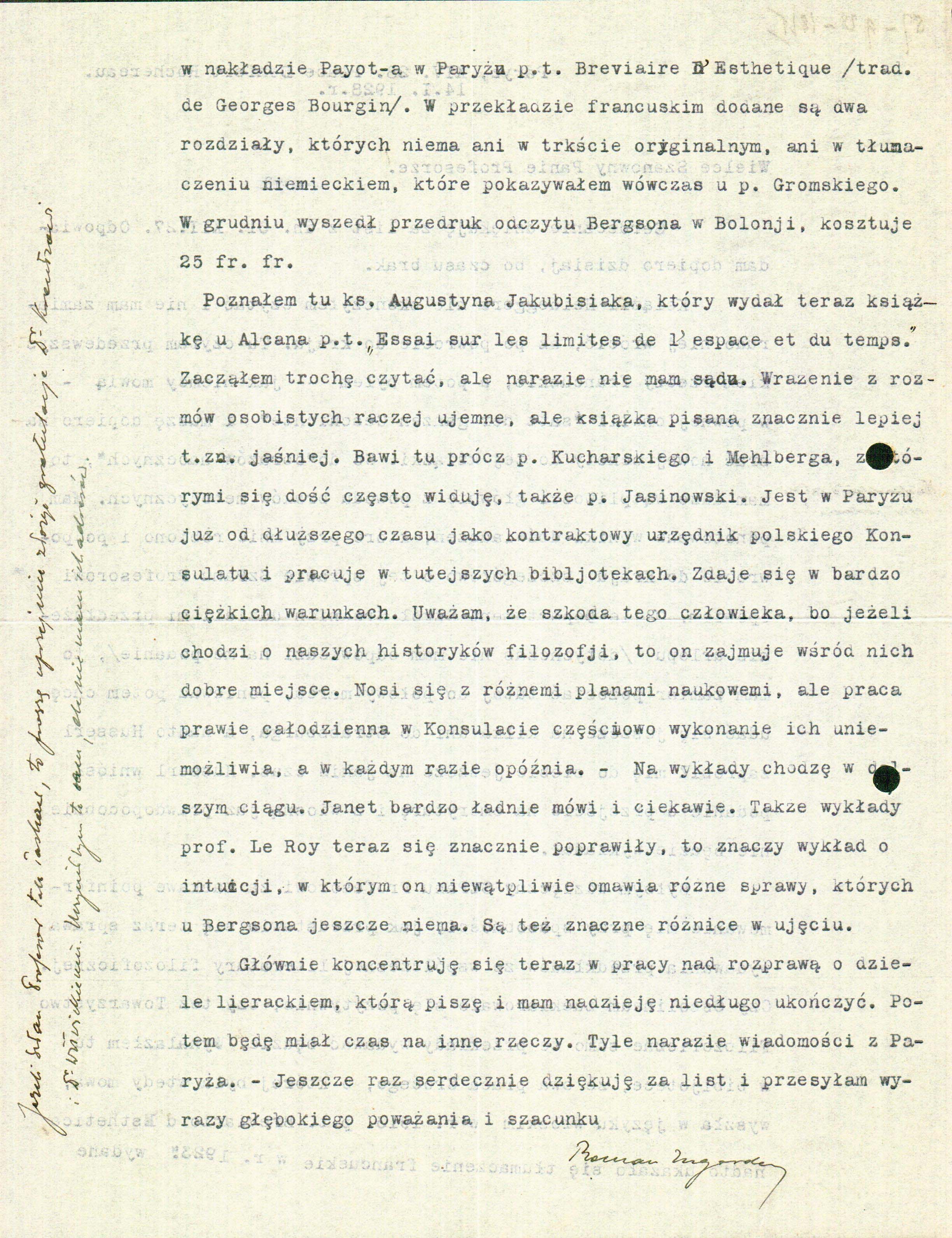 I haven’t finished reading Heidegger’s book and have no intention of returning to it until I’ve returned to Poland. Here, I’m reading primarily French things, and then for a while I was, as the Germans say, satt der ganzen Geschichte [German: fed up with the whole story] and have to get in the mood for this book again. As for ‘visual images’, I have strong doubts, chiefly due to methodological shortcomings. (Kucharski [O2] shares these doubts!) I have notes on the results of experiments that were conducted in my presence, and after returning to Poland I’ll tell you about this issue in detail. If the Department of Secondary Schools grants me an extension of my leave (so far I haven’t had a reply to my application), I intend to stay here until mid-March, because then I want to go to Strassburg [Strasbourg] for a few days, and moreover Husserl has invited me to his place for an additional period. Husserl has applied for retirement and probably won’t be lecturing as of this spring.

I’d be grateful to you for graciously informing me, given the opportunity, where the matter of publication of translations from contemporary philosophical literature currently stands. Has Ossolineum declared itself in favour, or will the Philosophical Society publish these translations independently? I discovered in the library here that Croce[O3] ’s paper, which was being spoken of then, came out in Italian in 1913 under the title Breviario d’Esthetica [Breviario d’Estetica, Breviary of aesthetics]; moreover, a French translation appeared in 1923, published by Payot[O4]  in Paris under the title Bréviaire d’Esthétique [Breviary of aesthetics] (translation by Georges Bourgin[O5] ). Two chapters were added in the French translation which are in neither the original text nor the German translation, which I showed then at Mr Gromski’s[O6] . In December, a reprint of Bergson’s lecture in Bologna came out; it costs 25 French francs.

I’ve met here Fr Augustine Jakubisiak[O7] , who’s just published a book with Alcana entitled Essai sur les limites de l’espace et du temps [Essay on the limits of space and time]. I’ve started reading a bit, but haven’t arrived at a judgment yet. My impression from personal conversations is rather negative, but the book is much better, i.e. more clearly, written. Besides Mr Kucharski and Mr Mehlberg[O8] , whom I see quite often, there’s also Mr Jasinowski[O9] , who’s been in Paris for a long time now as a contract official of the Polish Consulate and who works at the local library – in seemingly very difficult conditions. I think this is a shame, since, in terms of our historians of philosophy, he occupies a prominent place among them. He has various plans for academic work, but working nearly all day at the Consulate partly prevents, and in any case delays, their execution. ‒ I’m still going to lectures. Janet[O10]  speaks very beautifully and interestingly. As well, Prof. Le Roy[O11] ’s lectures have now improved significantly, that is, his lecture on intuition, in which he undoubtedly discusses various issues that are still missing in Bergson. There are also significant differences in approach.

I’m mainly concentrating now on work on the dissertation, which I’m writing and which I hope to finish soon, concerning the literary work. Then I’ll have time for other things. So much for now for news from Paris. ‒ Once again, I cordially thank you for your letter and send you expressions of my most profound esteem and respect

If you’d be so gracious, please extend my congratulations to Dr Kreutz [O12] and Dr Witwicki[O13] . I’d do it myself, but don’t have their addresses.