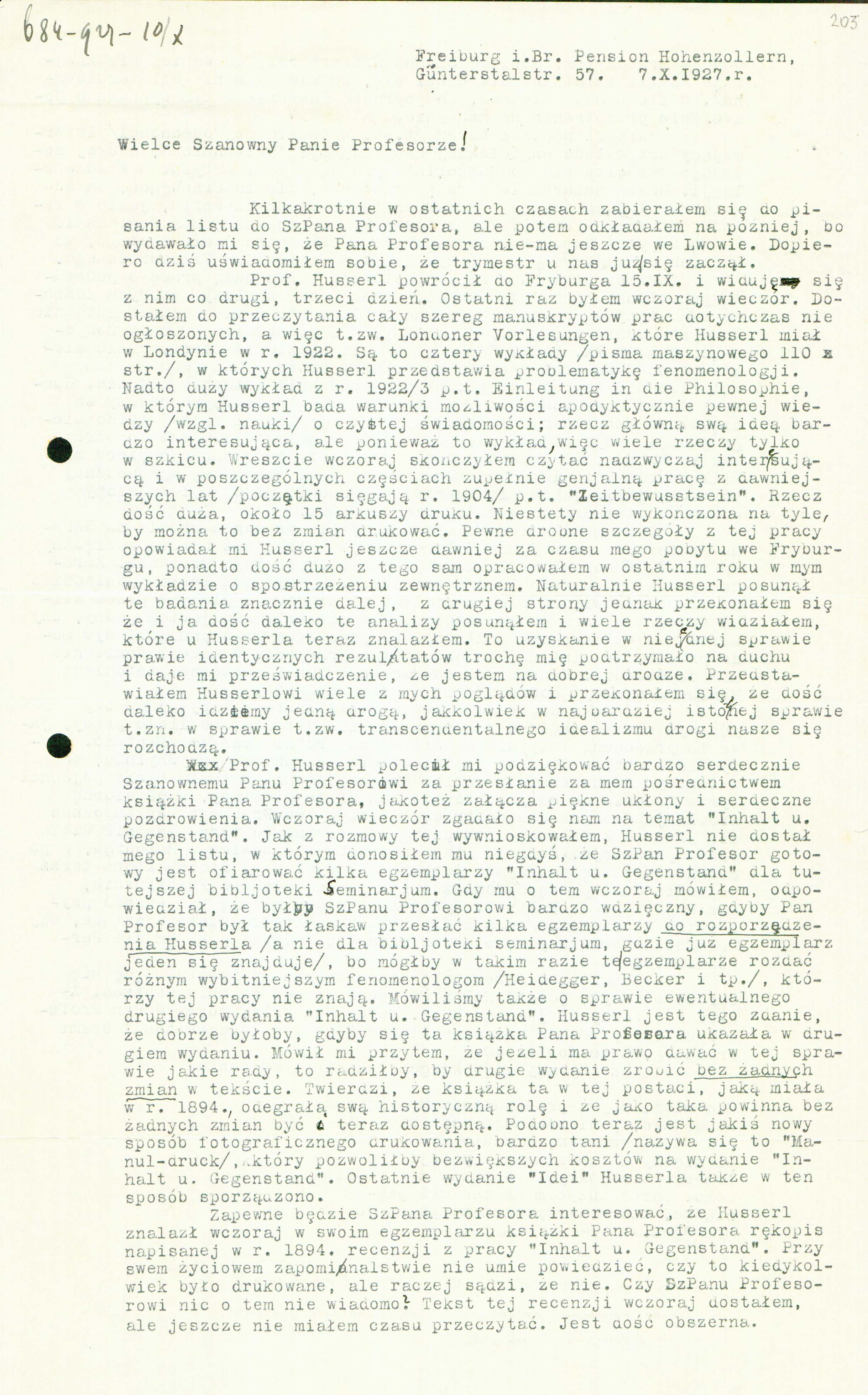 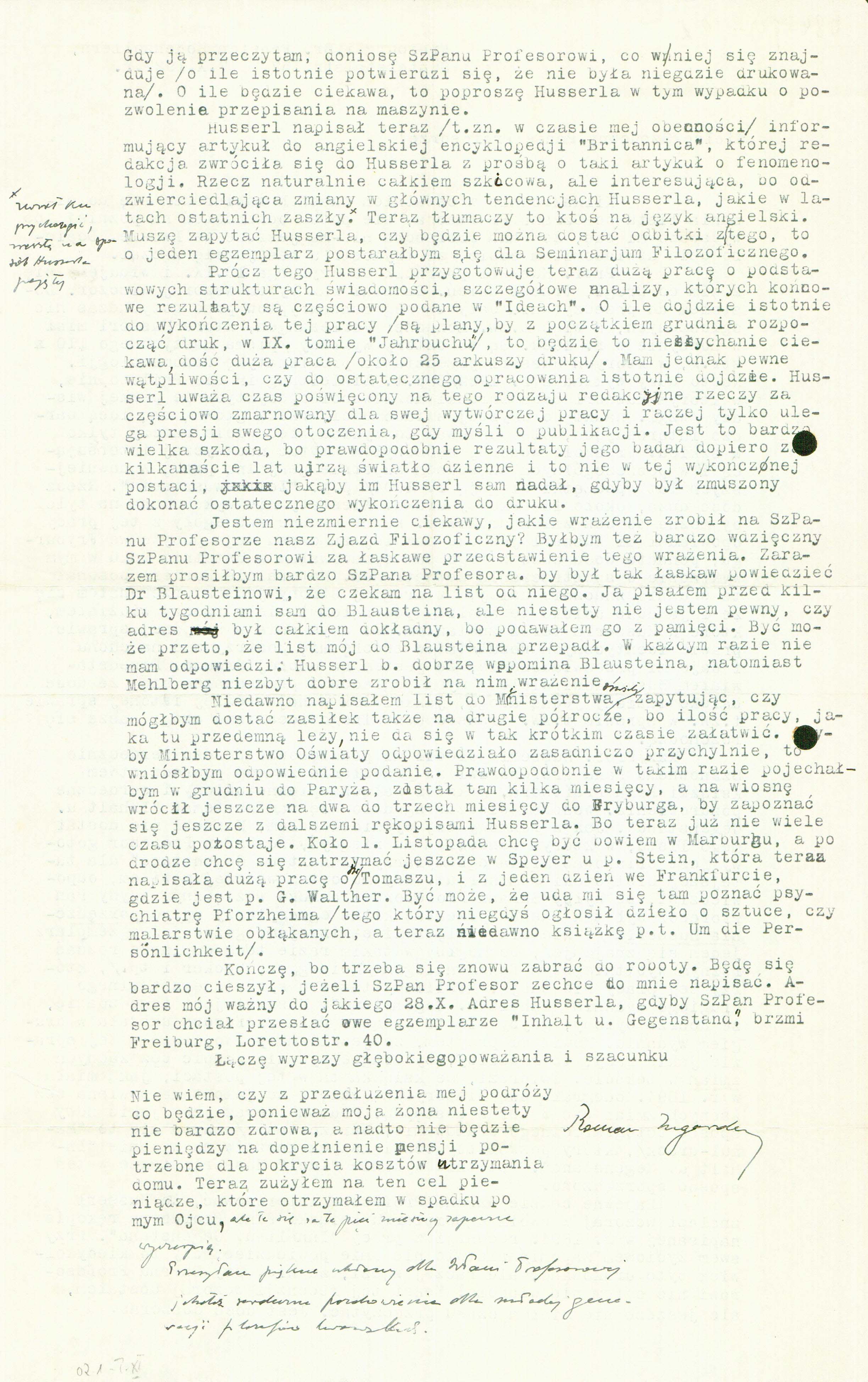 Several times recently I’ve started to write you a letter, but then put it aside until later, because it seemed to me you weren’t in Lviv yet. It wasn’t until today that I realised that our trimester had already begun.

Prof. Husserl returned to Freiburg on 15/9, and I see him every two or three days. The last time was yesterday evening. I’ve been able to read a whole series of manuscripts of papers that haven’t been published to date, and thus the so-called ‘Londoner Vorlesungen’ [London Lectures], which Husserl gave in London in 1922. These are four lectures (110 typewritten pages) in which Husserl presents the problems of phenomenology. In addition, there’s a major lecture from 1922/3 entitled ‘Einleitung in die Philosophie’ [Introduction to philosophy], in which Husserl examines the conditions for the potential of apodictically certain knowledge (or science) concerning pure consciousness; its main idea is very interesting, but since it’s a lecture, many things are only sketched out. Finally, yesterday, I finished reading an extremely interesting and, in particular parts, absolutely ingenious paper from earlier years (its beginnings date back to 1904) entitled ‘Zeitbewusstsein’ [Consciousness of time]. It’s quite extensive, about 15 arkuszy [O2] of print. Unfortunately, it hasn’t been completed to the point that it can be printed without any changes. Husserl had told me about certain minor details of this work earlier, during my stay in Freiburg; moreover, I’ve developed this topic quite a bit over the past year in my lecture on external perception. Naturally, Husserl had pushed this investigation significantly further; on the other hand, I’m convinced that I also made considerable progress in these analyses and saw many things that I’ve now found in Husserl. This acquisition, on more than one issue, of nearly identical results has helped to keep my spirits up and gives me confidence that I’m on the right track. I’ve presented many of my views to Husserl and am convinced that we’re making substantial progress along one and the same path; however, on the most essential issue, i.e. in the matter of so-called transcendental idealism, our paths diverge.

Prof. Husserl asked me to give you his very cordial thanks for sending him, through me, your book, and sends his best regards and cordial greetings. Yesterday evening we spoke on the topic of Inhalt u. [und] Gegenstand [a book by Twardowski, published in German in 1894, full title Zur Lehre vom Inhalt und Gegenstand der Vorstellungen (On the Content and Object of Presentations)]. As I concluded from this conversation, Husserl had not received the letter of mine in which I informed him at one point that you were prepared to offer several copies of Inhalt u. [und] Gegenstand to the local Seminarium library. When I spoke to him about it yesterday, he replied that he’d be very grateful to you if you’d be so gracious as to send a few copies for Husserl to distribute (and not for the seminarium library, where one copy can already be found), because in that case he could give out these copies to some of the more outstanding phenomenologists (Heidegger, Becker, etc.), who aren’t familiar with this paper. We also talked about the matter of a potential second edition of Inhalt u. [und] Gegenstand. Husserl is of the opinion that it’d be a good thing for this book of yours to come out in a second edition. He told me that if he might offer some advice in this matter, he’d advise that the second edition be issued without any changes in the text. He declares that this book, in the form in which it appeared in 1894, played a historic role and that, as such, it should be made available now without any changes. Apparently now there’s a new technique of photographic printing, very cheap (known as ‘Manul-druck’ [sic; Manuldruck, also known as Reflexkopierverfahren, or reflex copying method]) which would enable publication of Inhalt u. [und] Gegenstand without great expense. The latest edition of Husserl’s Ideas [Ideas: General Introduction to Pure Phenomenology] was also done in this way.

You’ll probably be interested to hear that yesterday Husserl found, in his copy of your book, the manuscript, written in 1894, of a review of the paper Inhalt u. [und] Gegenstand. Due to his lifelong tendency towards forgetfulness, he’s unable to say whether it has ever been published, but rather believes that it hasn’t. Do you know anything about this? I received the text of this review yesterday, but haven’t had the time to read it yet. It’s quite extensive. When I read it, I’ll tell you what’s in it (if it’s indeed confirmed that it’s never been printed anywhere). Assuming it’s interesting, I’ll ask Husserl in this case for permission to type it.

Husserl has now (i.e. while I’ve been here) written an informational article for the English Encyclopædia Britannica, whose editors turned to Husserl for such an article about phenomenology. Naturally, it’s very sketchy, but interesting, because it reflects changes in Husserl’s main tendencies that have occurred in recent years.* Someone’s now translating it into English. I have to ask Husserl whether it’ll be possible to obtain offprints; if so, I’ll try to obtain one copy for the Philosophical Seminarium.

In addition, Husserl is now preparing a substantial paper on the basic structures of consciousness – detailed analyses, the final results of which are given in part in Ideas. Assuming this paper is indeed completed (there are plans to start printing it at the beginning of December for Volume IX of [Philosophical] Yearbook), it’ll be extremely interesting, quite a substantial paper (approximately 25 arkuszy[O3] ). However, I have certain doubts as to whether it’ll indeed be completely developed. Husserl considers the time devoted to this kind of editorial work as partly wasted and as better spent on creative work, and generally, when he thinks in terms of publication, submits only to pressure from his surroundings. This is a great pity, because most likely the results of his research won’t see the light of day until a decade or so has passed, and then not in the finished form that Husserl himself would give them were he forced to make the finishing touches for publication.

I’m extremely curious as to what impression our Philosophical Congress made on you. I’d be very grateful to you as well for graciously sharing your impressions. At the same time, I’d ask you to be so gracious as to tell Dr Blaustein[O4]  that I’m waiting for a letter from him. I wrote to him a few weeks ago, but unfortunately I’m not sure whether the address was completely accurate, because I wrote it from memory. Possibly, therefore, my letter miscarried. In any case, I haven’t had an answer. Husserl remembers Blaustein very well, whereas Mehlberg[O5]  didn’t make a very good impression on him.

Recently I wrote a letter to the Ministry of Education, asking whether I might get an allowance for the second half of the year as well, because the amount of work ahead of me can’t be done in such a short time. If the Ministry responds favourably, I’ll submit the appropriate application. Probably in that case I’ll go to Paris in December, stay there for a few months, and in the spring come back to Freiburg for another two or three months, to acquaint myself with more of Husserl’s manuscripts, because as of now there isn’t much time left. Around 1 November I want to be in Marburg, and along the way I’d still like to stop in Speyer to see Ms Stein[O6] , who’s now writing an extensive paper on St Thomas [of Aquinas], and one day in Frankfurt, where Gerda Walther [O7] is. Perhaps I’ll manage to meet the psychiatrist Pforzheim [O8] (the one who once published a work about the art, or painting, of the insane, and just now a book entitled Um die Persönlichkei[t] [On the personality]

I’ll finish here, because I need to get back to work. I’d be very happy if you wouldn’t mind writing to me. My address is good until about 28/10. Husserl’s address, if you’d like to send your copies of Inhalt u. [und] Gegenstand, is Freiburg, Lorettostr. 40.

I don’t know what will become of the extension of my trip, because my wife, unfortunately, is not in very good health, and there won’t be any money to supplement the allowance needed to cover the cost of maintaining the household. I’m now using the money I inherited from my Father for this purpose, but this is probably going to be exhausted after these five months. I’m sending you my best regards, along with cordial greetings for the young generation of Lviv philosophers.

*a turn toward psychology, as understood by Husserl, at any rate

Letter to the Committee of the Library of Classics of Philosophy written 30.09.1952